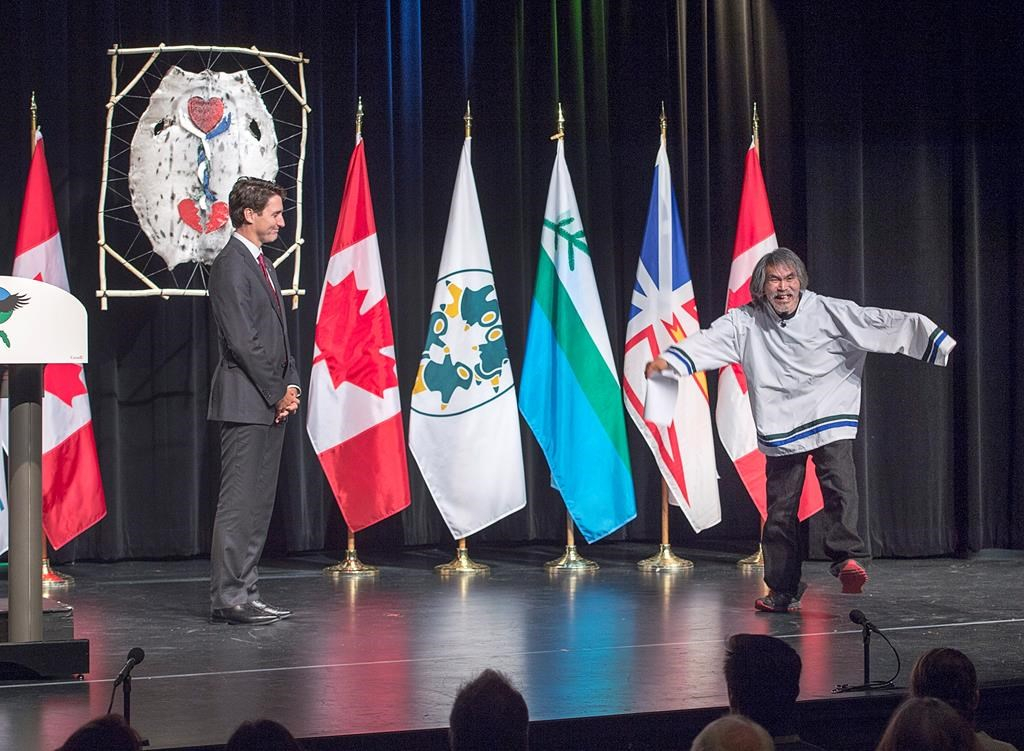 Justin Trudeau welcomes residential survivor Toby Obed to the stage after delivering an apology on behalf of the Govt. of Canada to former students of the N.L. Residential Schools in Happy Valley-Goose Bay on Nov. 24, 2017. Photo by The Canadian Press
Previous story
Next story

Once frightened, lonely children who lost their culture and innocence rose in a standing ovation Friday as the prime minister at last said it for all Canadians: It was wrong, and we are sorry.

"I humbly stand before you to offer a long-overdue apology," Justin Trudeau said through tears. "To all of you, we are sorry."

Many of the 300 people gathered for the ceremony in Goose Bay bowed their heads and cried. Others tried to comfort those who sobbed openly.

Trudeau offered the apology for beatings, sexual abuse, neglect and loss of Innu and Inuit language and culture at residential schools in the province. They were located in North West River, Makkovik, Cartwright and Nain — all in Labrador — and one in St. Anthony in northern Newfoundland.

The International Grenfell Association ran three of the schools, while the Germany-based Moravian missionaries ran the other two.

Trudeau said parents were promised their children would be cared for and would be safe.

Instead, kids as young as five were isolated from their families and stripped of their identity. They were made to feel "irrelevant and inferior" and taught to be "ashamed of who they were and where they were from."

"The kind of thinking that led to the establishment of the residential school system and left deep scars for so many has no place in our society," Trudeau said. "It was unacceptable then and it is unacceptable now."

The former students were left out of a compensation package and national apology in 2008 by former prime minister Stephen Harper. His Conservative government argued that Ottawa didn't oversee those schools, but the Liberal government offered last year to settle a class-action lawsuit for $50 million.

Approaching the stage, his arms raised in triumph, Obed yelled: "We got it!"

"Because I come from a patient and forgiving culture I think it is proper for us to accept an apology from the Government of Canada," he said.

Obed led the almost decade-long legal fight for recognition. He was among 29 former students who were the only ones in Canada forced to testify in open court about what happened to them.

"This apology is an important part of the healing," Obed said, stopping at times to collect himself. "Today ... we can finally feel a part of the community of survivors nationwide across Canada."

"And it's in person, it was not on the news. We didn't have to go out to them, they came to us," he said to cheers from the crowd.

Not everyone was ready to accept the gesture.

"I'm not satisfied that Canada understands yet what it has done to Innu and what it is still doing," Grand Chief Gregory Rich said in a statement late Thursday.

It says Innu children were abused in Roman Catholic schools and in the homes of teachers and missionaries in Sheshatshiu and Davis Inlet. And it calls on Ottawa to be full participants in a provincial inquiry into how child welfare systems continue to split Innu families.

Trudeau was also asked Friday about Indigenous residents who've faced arrest and jail time for peacefully protesting how the Muskrat Falls hydro dam under construction in the region could contaminate crucial wild foods.

The prime minister said the apology is a sincere gesture toward lasting reconciliation but conceded there's more work to be done.

Miriam Saunders of Goose Bay, whose daughter Loretta was murdered in Halifax in 2014 by a man she had sublet her apartment to, said the scope of the class-action settlement caused deep hurt because of those it left out.

She said her father and others who attended the schools before 1949 suffered too.

"He was beaten," she said, and later refused to teach her Inuktitut to spare her a similar fate.

The $50-million class-action settlement reached with Ottawa last year did not include students who attended before Newfoundland joined Confederation in 1949. Before then, it was a separate dominion.

"The British government should be apologizing," Saunders said.

Memorial candles were also lit in honour of more than 120 former students who died waiting for a resolution.

They glowed in front of a striking stage backdrop depicting a broken red heart rising to a whole heart on a silver grey seal skin. It is a piece called The Healing by Rigolet artist Inez Shiwak.

Inuk elder Sarah Anala recalled crying into her pillow as a child in her dorm bed, mouth open so no one would hear her.

She told of a prophesy that the deep troubles of her people would ease when once-outlawed drums were heard again.

"The drum is back," she said. "And who brought it back? Our youth."