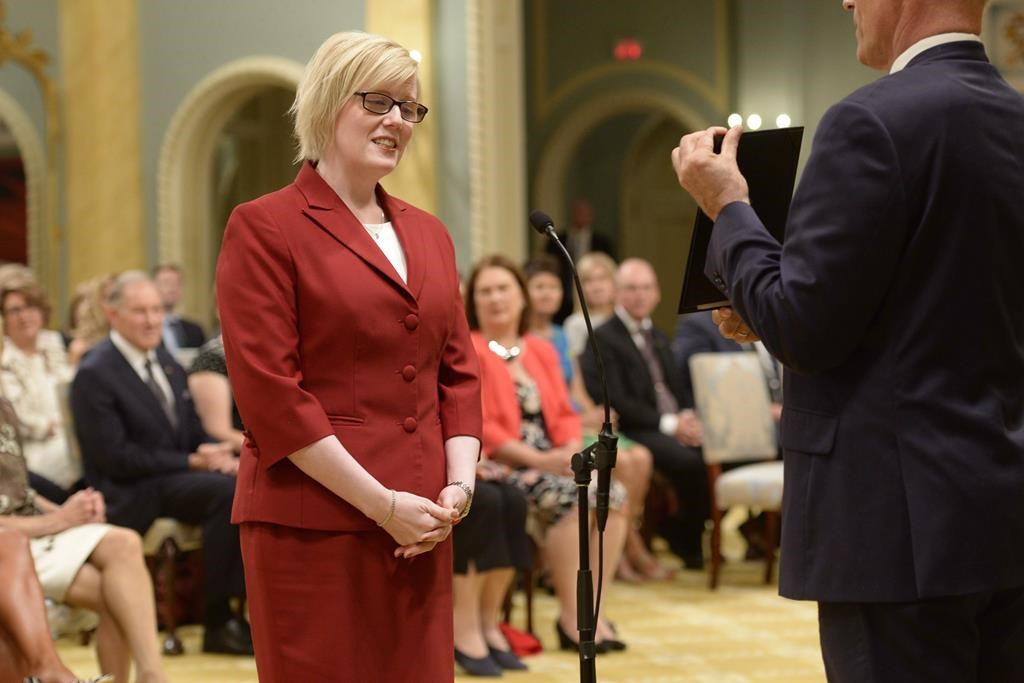 Former federal sports minister Carla Qualtrough is sworn in as the public services minister during a cabinet shuffle on July 28, 2017. File photo by The Canadian Press
Previous story
Next story

The federal government won’t scrap the troubled Phoenix pay system, despite its costly problems and criticisms from the auditor general, the deputy minister responsible for fixing the system told a Commons committee Tuesday.

"There is no fall−back," Marie Lemay of the Public Services and Procurement Department told the public accounts committee.

"There is no former system to go back to," she said, adding that her department has no choice but to attempt to stabilize Phoenix — at least in the short term.

Lemay made the comments as she, other government officials and auditor general Michael Ferguson testified at the House of Commons public accounts committee.

Lemay’s comments echoed those made on the weekend by Liberal MP Steve MacKinnon. The parliamentary secretary to Public Services and Procurement Minister Carla Qualtrough said there is currently no alternative system that can quickly replace Phoenix.

Ferguson last week issued a blistering report on Phoenix, warning that stabilizing it will take years and cost more than $540 million.

On Tuesday, he told the committee the government needs to work in two phases to resolve the pay system fiasco.

"The first priority is to pay people the right amount on time," Ferguson said.

"However, after that is achieved, there will still be work to do to get a system that processes pay efficiently," he said. "The longer−term solution needs to last and be as efficient as it can be."

Lemay appeared to agree, telling the committee her department will examine alternative options to the Phoenix system over the longer term.

One of the biggest federal civil service unions has called on the Liberal government to scrap Phoenix and build an in−house system virtually from scratch.

The Professional Institute of the Public Service of Canada, which represents government IT professionals, said earlier this month it could build a brand new pay system from scratch based on the latest version of Oracle’s PeopleSoft software. Union president Debi Daviau said she expected the new system could be brought online, after thorough testing, within a year of starting the project.

Lemay said her department has worked with civil service unions as it tries to stabilize Phoenix and that officials had met with PIPSC representatives in the last week, although she made no commitments to adopting union proposals for paying government employees.

IBM was contracted by the previous Conservative government to repurpose PeopleSoft to create the Phoenix system.

Daviau said it’s not the core software that failed, but the configuration and implementation, which she said involved a lack of proper training of payroll system employees.

Under questioning from New Democrat MP David Christopherson over who is to blame for the Phoenix pay problems, Lemay said IBM had done nothing wrong in carrying out the work to develop the system.

"Throughout the project, IBM has done what we asked them to do," she told the committee. "It’s not IBM that was the project manager. It’s a bit like hiring a contractor to build a house," and then asking the contractor to make revisions to the original house design.

In his report to Parliament last week, the auditor general said about 150,000 government employees — about half of the federal workforce — have faced pay problems since Phoenix was launched in early 2016, including being underpaid, overpaid or not paid at all.

The system originally went live in February of that year and was tested on a handful of departments. Despite almost immediate complaints of problems with the system, it was enacted across 46 departments and agencies two months later. Soon afterward, problems were identified with more than 82,000 pay files and the backlog of incorrect transactions quickly ballooned from there.

Committee chairman and Conservative MP Kevin Sorenson, who represents a rural Alberta riding with few federal civil servants, said his constituency office has recently received more calls on Phoenix than any other file, including immigration.