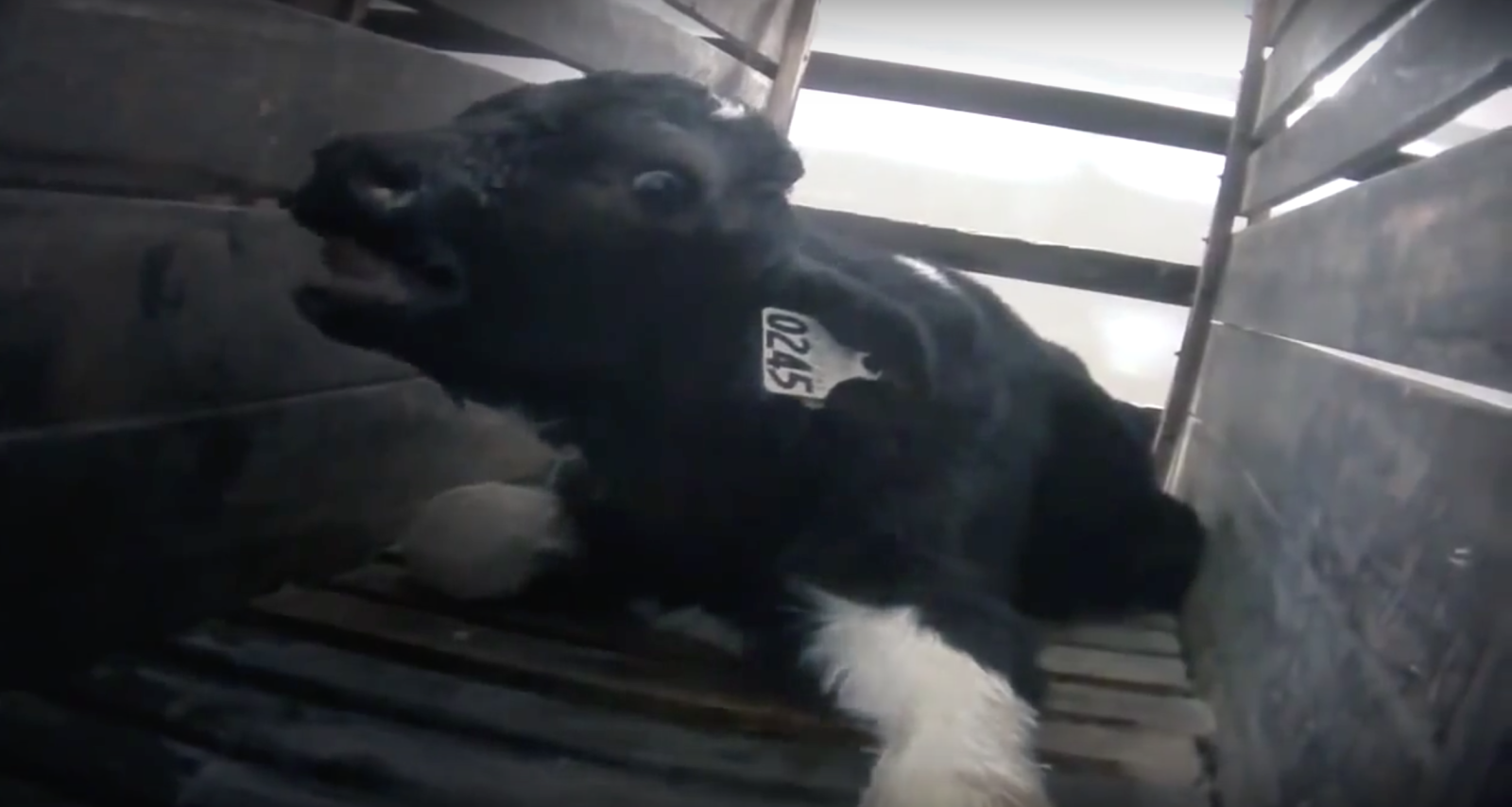 A baby cow cries out from its crate at a Quebec veal farm in 2014. Image obtained by Mercy For Animals during a 2014 undercover investigation
Previous story

Imagine, if you can, a baby who’s just been violently ripped from a wailing mother he will never know. Instead of being nursed and nurtured, he is locked up, alone and terrified, with nothing to sleep on but a barren wooden floor.

Deliberately starved of essential nutrients and exercise because it keeps his young flesh “tender,” he will waste away in solitary confinement until he’s killed.

This isn’t some episode of The Handmaid’s Tale. It’s the horrific reality of a baby calf raised in a veal crate — and it’s being replayed all day every day, right here in Canada.

Veal crates are cruel. Recognition of this is increasingly a marker of a civilized, progressive society. But our taxpayer-funded National Farm Animal Care Council (NFACC) continues to support keeping baby calves alone in crates so small the animals can barely move. Despite scientists’ affirmation that calves need social interaction and exercise to thrive, NFACC doesn’t mandate enough space for these baby animals to socialize or walk around, let alone run or play.

No protection for newborn calves

The old version of the veal code, last updated in 1998, encouraged farmers to keep calves in crates and permitted animals to be tethered for their entire lives on rope so short that they couldn’t turn around. While the new code prohibits tethers and mandates that calves be kept in groups after eight weeks of age, NFACC has done nothing to protect these baby animals when they are most vulnerable: from birth to eight weeks of age. Prior to eight weeks, calves may still be housed in solitary confinement. Disturbingly, NFACC is even allowing the industry another 15 years to stop isolating these social animals in crates with solid sides that prevent them from even seeing other animals.

In 2014, an undercover investigation by Mercy For Animals into Délimax, a Quebec veal factory farm, revealed the kind of abuse that’s all too standard in veal production: baby calves crammed into feces-ridden crates barely larger than their own bodies, chained by the neck and unable to turn around or lie down comfortably; and injured animals left to suffer and slowly die.

Because we are a compassionate society, there was public outcry—and the industry responded. As a result of the horrifying investigation, Les Producteurs de bovins du Québec (Quebec Cattle Producers) and major retailers Loblaws, Sobeys, and Metro committed to banning veal crates in favour of loose housing at its member facilities by 2018, and the Veal Farmers of Ontario recommended a phaseout by the same year. Even Harvey Buksbaum, president of Montpak International, North America's largest veal producer, committed to a ban on veal crates for his company by 2018.

Industry should honour its commitment

Canadians care about preventing extreme animal cruelty (our taxpayer-funded organizations should as well). This is why Mercy For Animals is calling on the industry to honor its commitment to ending the use of cruel crates in favour of group housing for these social baby animals.

While veal production is one of the most abusive forms of animal agriculture, animal suffering is also widespread in the meat, dairy, and egg industries. Undercover investigations by MFA at dairy farms, pig farms, egg farms, hatcheries, and slaughterhouses have all exposed violence and cruelty to farmed animals.

Compassionate consumers can end their financial support of farmed animal abuse by rejecting veal and other animal products and adopting a compassionate plant-based diet. Because no baby deserves a short, miserable life.

Dinner time? Leave the fish off your plate

Unless the consumer is

Unless the consumer is educated about where their food comes from and how it's raised/grown, they will continue to naively eat that which is raised under unconscionable conditions.

Know your food's sources and support your local farming community by going to farmers' markets and ask questions within your local agricultural community. Industry will modify its practices as consumers dictate their choices. But that can only be done when education supplants ignorance.