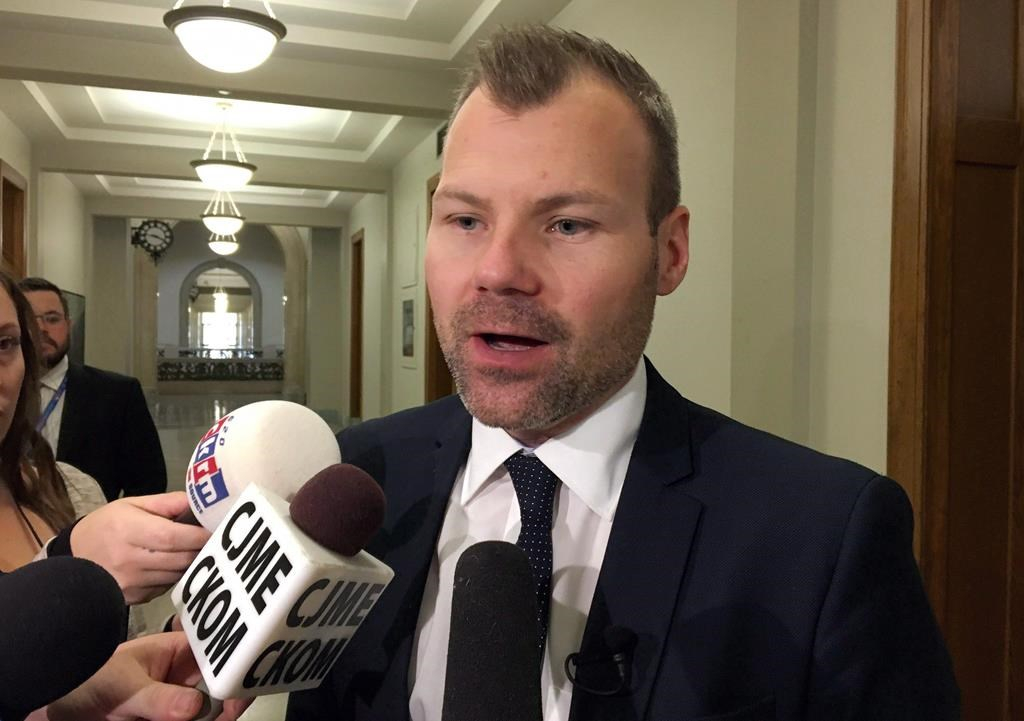 The Saskatchewan government has introduced a climate-change strategy that inches toward a price on carbon emissions, but leaves large parts of its economy untouched.

And it doesn't include a carbon tax, which Environment Minister Dustin Duncan was happy to point out Monday.

"I believe it will achieve as much, if not more than, a carbon tax ever would," Duncan said after introducing the plan.

It calls for performance standards on facilities that emit more than 25,000 tonnes annually of carbon dioxide equivalent. Facilities that exceed their limit will have to pay.

They will be able to buy carbon offsets from farmers or foresters, a carbon credit from another company with emissions under its allotment or pay into a provincial fund.

The standards are to be developed next year, Duncan said.

"We want to see the economy continue to grow and, for some industries, that means that their emissions will grow. It's not a cap-and-trade program where we're capping absolutely the amount of emissions."

Duncan said standards will recognize investments companies have already made to reduce their emissions, something the energy industry has been lobbying for.

The document contains no goals or targets and doesn't include estimates of how much greenhouse gas emissions are expected to be reduced. There is an undated pledge to have SaskPower, a Crown-owned utility, generate half its electricity from renewables.

"They're going to great pains to say they're not doing carbon pricing and then implementing a policy which, everywhere else it's implemented, is called carbon pricing," said University of Alberta energy economist Andrew Leach.

The biggest hole in Saskatchewan's plan is its limited scope, said Leach.

"They're not touching their transportation, home heating, commercial and industrial energy use at all with this policy."

Alberta, British Columbia, Ontario and Quebec all have more inclusive plans, he said.

Leach also noted the government hasn't specified how high the emissions standards will be. Too high, he said, and carbon becomes worthless and few emissions will be cut.

But she said it will have to be wider to satisfy Ottawa.

"Based on what’s in today’s plan, Saskatchewan’s price likely wouldn’t hit our standard, because it applies only to heavy industry instead of being economy-wide."

"There's a great range of compliance options for us there."

He declined to say whether Saskatchewan's plan is more favourable to industry than Alberta's, which includes a carbon tax.

"Both are legitimate," he said.

The Agricultural Producers of Saskatchewan also praised the plan. It leaves agriculture, the source of about one-quarter of the province's emissions, largely exempt.

"We also strongly reject the imposition of a carbon tax on our sector," said association president Todd Lewis.

Erin Flanagan of the Pembina Institute, a clean energy think-tank, said Saskatchewan's plan is an improvement over previous positions.

"It's still not a credible approach to climate change," she said. "They are last to the party, but it's good they are moving forward with some pieces of an approach."

Flanagan said it's tough to know how much difference the plan will make.

"The fact they haven't said what these (carbon) prices will be makes it difficult to know what kind of impact this is going to have. Saskatchewan doesn't have an economy-wide (reduction) target.

Saskatchewan has remained opposed to the federal government's insistence that all provinces must have a price on carbon in place by 2018.

"We're prepared to defend our position. If that means go to court, so be it."