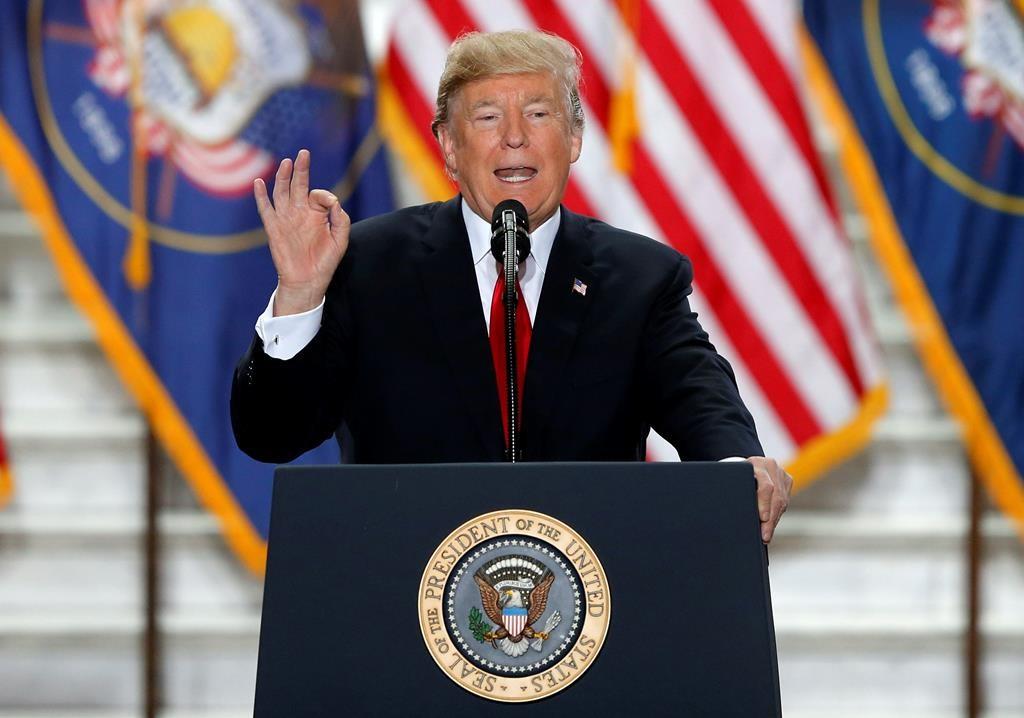 President Donald Trump's rare move to shrink two large national monuments in Utah triggered another round of outrage among Native American leaders who vowed to unite and take the fight to court to preserve protections for lands they consider sacred.

Environmental and conservation groups and a coalition of tribes joined the battle Monday and began filing lawsuits that ensure that Trump's announcement is far from the final chapter of the years-long public lands battle. The court cases are likely to drag on for years, maybe even into a new presidency.

Trump decided to reduce Bears Ears — created last December by President Barack Obama — by about 85 per cent. He would reduce Grand Staircase-Escalante — designated in 1996 by President Bill Clinton — by nearly half. The moves earned him cheers from Republican leaders in Utah who lobbied him to undo protections they considered overly broad.

Conservation groups called it the largest elimination of protected land in American history.

The move comes a week after tribal leaders decried Trump for using the name of a historical Native American figure as a slur.

On Nov. 27, Trump used a White House event honouring Navajo Code Talkers to take a political jab at Sen. Elizabeth Warren, a Massachusetts Democrat he has derisively nicknamed "Pocahontas" for her claim to have Native American heritage.

"It's just another slap in the face for a lot of us, a lot of our Native American brothers and sisters," Navajo Nation Vice-President Jonathan Nez said. "To see that happen a week ago, with disparaging remarks, and now this."

The Navajo Nation was one of five tribes that formed a coalition that spent years lobbying Obama to declare Bears Ears a national monument to preserve lands home to ancient cliff dwellings and an estimated 100,000 archaeological sites. Native Americans visit the area to perform ceremonies, collect herbs and wood for medicinal and spiritual purposes, and do healing rituals.

A lawsuit from the coalition of the Hopi, Ute Indian, Ute Mountain Ute, Zuni tribes and Navajo Nation was filed late Monday night.

Earlier Monday, Earthjustice filed the first of several expected lawsuits, calling the reduction of Grand Staircase-Escalante an abuse of the president's power that jeopardizes a "Dinosaur Shangri-la" full of fossils. Some of the dinosaur fossils sit on a plateau that is home to one of the country's largest known coal reserves, which could now be open to mining. The organization is representing eight conservation groups.

Trump, in a speech at Utah's Capitol with the governor and other politicians, said the state's lands should not be managed by "very distant bureaucrats located in Washington."

"Your timeless bond with the outdoors should not be replaced with the whims of regulators thousands and thousands of miles away," Trump said. "I've come to Utah to take a very historic action to reverse federal overreach and restore the rights of this land to your citizens."

The decision marks the first time in a half century that a president has undone these types of land protections.

Trump's move followed months of lobbying by Utah's mostly Republican officials who said the two monuments closed off the area to energy development and other access.

Navajo Nation Attorney General Ethel Branch said only Congress, not the president, has the power to reduce a national monument, something that the tribal coalition argued in its lawsuit.

Outside Trump's announcement Monday, roughly 3,000 protesters lined up near the state capitol. Some held signs that said, "Keep your tiny hands off our public lands," and they chanted, "Lock him up!" A smaller group gathered in support, including some who said they favour potential drilling or mining there that could create jobs. Bears Ears has no oil or gas, Interior Secretary Ryan Zinke told reporters, though Grand Staircase-Escalante has coal.

Both were among a group of 27 monuments that Trump ordered Zinke to review this year.

Democrats and environmentalists accuse Trump and Zinke of engaging in a secretive process aimed at helping industry groups that have donated to Republican political campaigns.

Zinke accompanied Trump aboard Air Force One, as did Utah's Republican U.S. Sens. Orrin Hatch and Mike Lee. Hatch and other Utah Republican leaders pushed Trump to launch the review, saying the monuments designated by the former Democratic presidents locked up too much federal land.

Trump framed the decision as returning power to the state, saying, "You know and love this land the best and you know the best how to take care of your land." He said the decision would "give back your voice."

"Public lands will once again be for public use," Trump said to cheers.

Hatch, who introduced Trump, said that when "you talk, this president listens" and that Trump promised to help him with "federal overreach."

No president has tried to eliminate a monument, but some have reduced or redrawn the boundaries on 18 occasions, according to the National Park Service. The most recent instance came in 1963, when President John F. Kennedy slightly downsized Bandelier National Monument in New Mexico.

Trump signed an executive order in April directing Zinke to review the protections, which Trump is able to upend under the 1906 Antiquities Act. The law gives presidents broad authority to declare federal lands as monuments and restrict their use.

Zinke has also recommended to Trump that Nevada's Gold Butte and Oregon's Cascade-Siskiyou monuments be reduced in size, though details remain unclear. The former Montana congressman's plan would allow logging at a newly designated monument in Maine and more grazing, hunting and fishing at two sites in New Mexico.

Patagonia President and CEO Rose Marcario said the outdoor-apparel company will join an expected court fight against the monument reduction, which she described as the "largest elimination of protected land in American history."