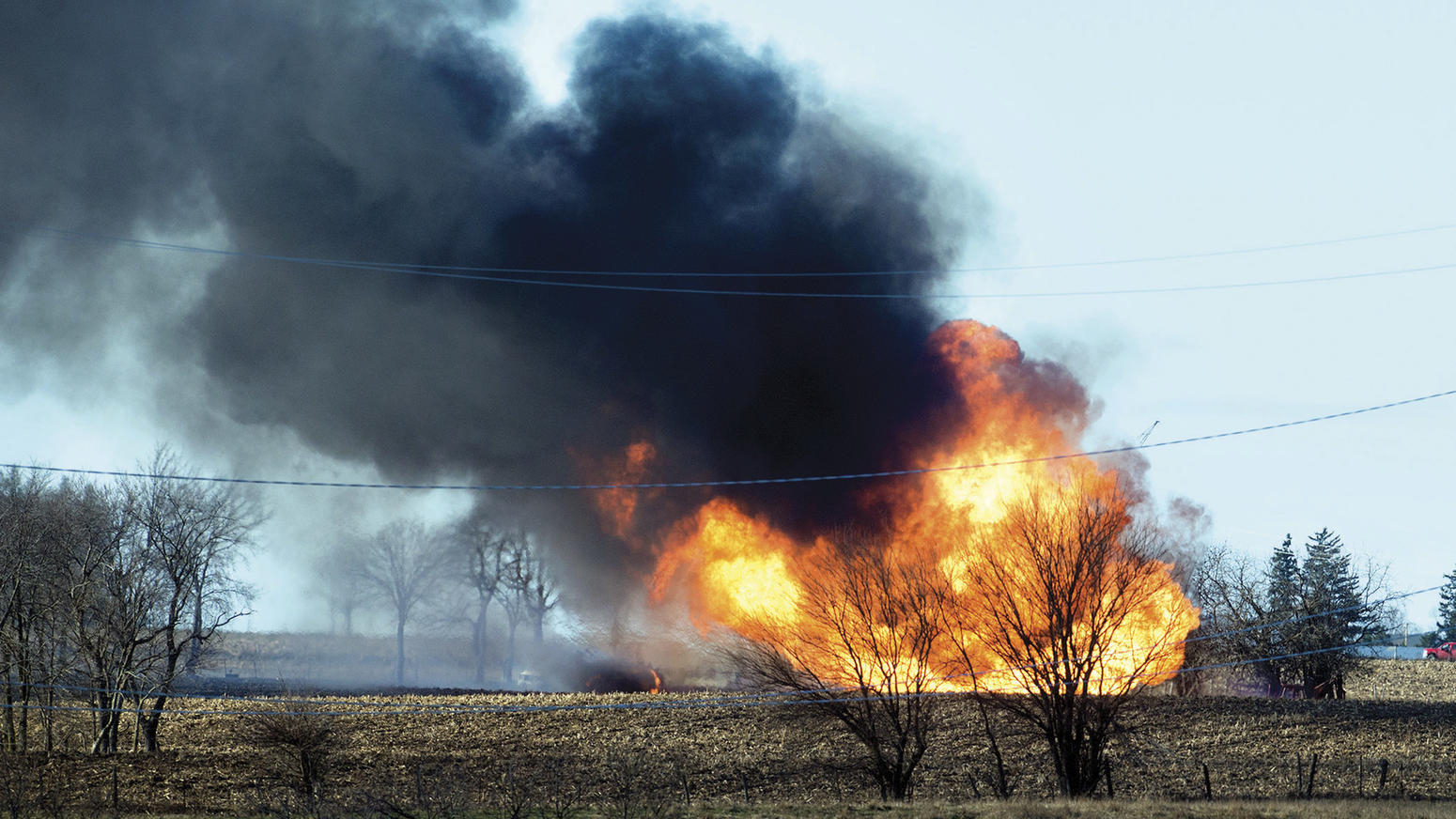 Fire burns at a Kinder Morgan pipeline explosion on Dec. 5, 2017 outside of Dixon, Ill. west of Chicago. The explosion killed two people and injured two others. Photo by The Associated Press /Alex T. Paschal
Previous story

Two people were killed and two were injured when a Kinder Morgan natural gas pipeline exploded in Illinois on Tuesday, the company has confirmed.

The deaths and explosion come at a time when the pipeline firm is battling to build its Trans Mountain expansion project in Western Canada in the face of fierce opposition.

On the morning of Dec. 5, 59-year-old Rory Miller and his son, 30-year-old Ryan Miller were killed when a buried gas pipeline operated by the Texas-based multinational exploded in Lee County, Ill. about 150 kilometres west of Chicago, according to the Associated Press.

As of the evening of Dec. 6, 20-year-old Michael Koster is in critical condition and 20-year-old Kyler Acklund was treated for injuries and released from the hospital.

"We weren't sure if a bomb went off," Clausen is quoted as saying.

The Lee County Sheriff’s Office said two tractors got stuck, and one hit the pipeline, a Dow Jones report stated. It said the two killed were found dead at the scene and area residents rushed the other two injured to hospital.

Lexey Long, a spokeswoman for Kinder Morgan, told National Observer the impacted pipeline has been “isolated and the area was secured.”

“Our thoughts and prayers are with the families of the injured and deceased,” said Long.

In its statement, Kinder Morgan said a mandatory call wasn’t placed alerting the company to digging in the field.

“Unfortunately, a required one call notification was not provided to the company prior to the work being performed,” said Long.

Matt Krogh, a campaign director for environmental group Stand.earth, said in an interview that he agreed that people should call a company before digging or doing work around an active gas line.

But he added that the issue also emphasizes the risk of gas pipelines to communities.

“Certainly having a gas pipeline on your property is something that people should be very aware of, and probably worried about,” said Krogh, who specializes in campaigns against what the Stand.earth describes as "extreme oil" production and extraction.

“It’s a one-time tragedy, but we keep seeing pipelines explode, and leak.”

Krogh said the the situation “serves as a sobering reminder” of the fact that thousands of people are exposed to pipelines in the United States and Canada.

“One way or the other, what you have is a Texas-based company that is running a series of risky propositions in the form of pipelines,” he said.

Editor's note: this story was updated at 5:30 p.m. EST on Dec. 6 to include new details from the Lee County Sheriff’s Office and an interview with Matt Krogh.

So, whom should we call RIGHT

So, whom should we call RIGHT NOW to report that a Kinder Morgan tank farm explosion on Burnaby Mountain will kill and injure dozens or hundreds? Oh, that's right, they already know, because we already told them. But they don't give a damn!

I want to express my

I want to express my heartfelt condolences to all the families and the people who have been so tragically impacted by this terrible accident. I appreciate National Reporter just providing information about this accident period. PLEASE National Observer, do not use it or allow it to be used as a platform to whip up fear and public opinion against pipelines and the oil and gas industry though. To do so is to sink to some level of fear mongering that actually does not help our cause whatsoever. Care for others (as well as every good thing on this earth) has to supercede everything else or we may as well not even try to preserve anything.

An unfortunate accident, but

An unfortunate accident, but one that has been repeated too many times across Canada and the US by people who fail to heed warnings about digging near pipelines. Nevertheless, the number of such accidents is minor when considering the millions of miles of pipelines crisscrossing America that carry vital energy supplies. We can be sure that the anti-pipeline eco-alarmists will use this incident to further their agenda just like those who believe that using aircraft to go anywhere is a very dangerous proposition despite similar statistics showing how few accidents occur compared to the millions of miles covered every year. These people would have everyone cowering in their bunkers living in fear of using any fossil or nuclear fuelled energy source. That may be the way of the Amish, but most people don't want to see their lives reduced to some eighteenth century existence when most people had to work on farms to raise enough food for everyone.

It is most unfortunate that

It is most unfortunate that lives were lost.

Pipeline companies relish blaming "third parties" for their leaks/releases, but neglect to ensure all pipeline locations are adequately marked and have sufficient depth of cover to prevent inadvertent contacts.