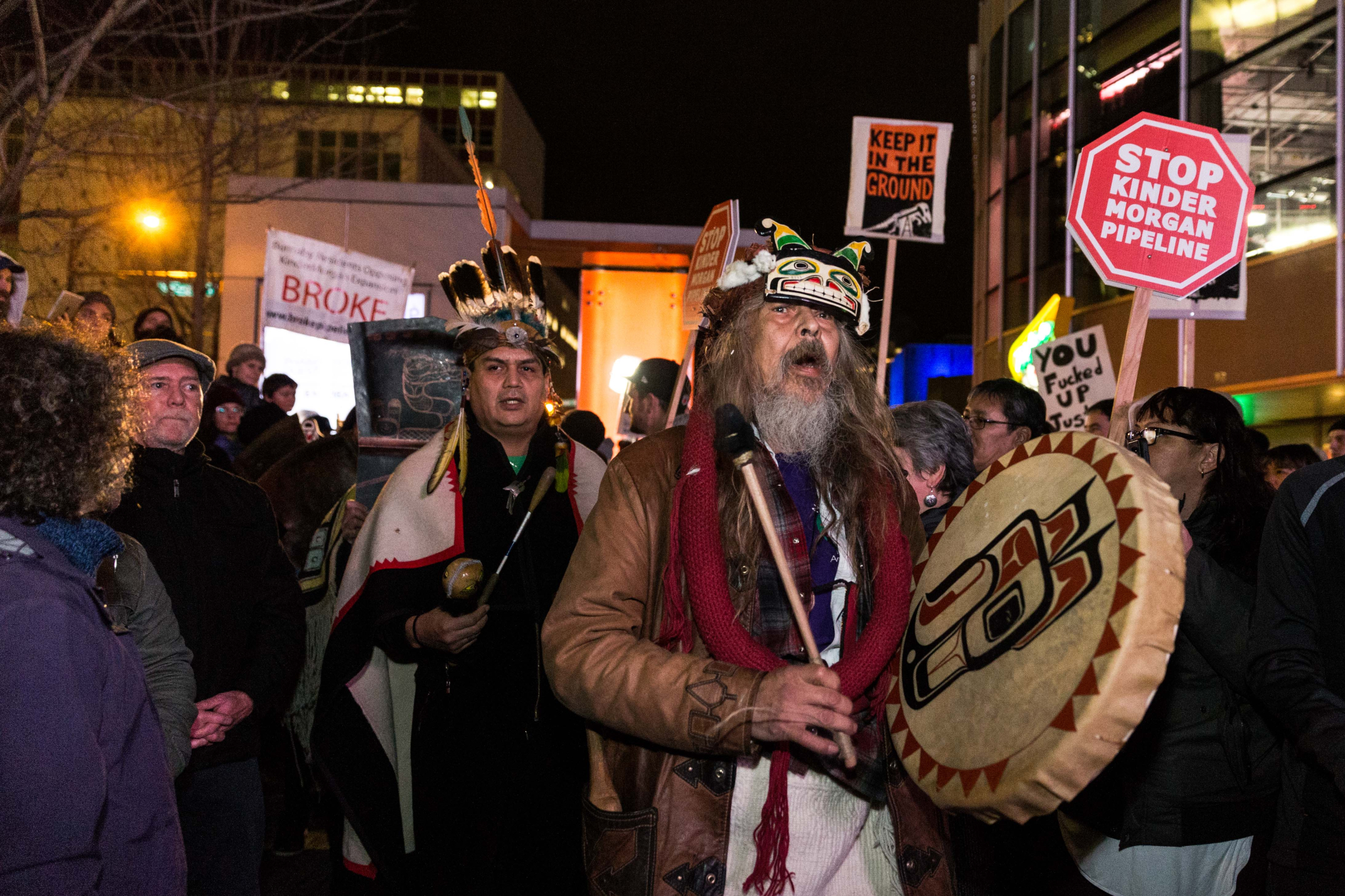 Indigenous protesters drum up support in their battle against the Kinder Morgan Trans Mountain expansion pipeline in Vancouver, B.C. on Tues. Nov. 29, 2016. Photo by Roger Pimenta
Previous story
Next story

Canada's energy regulator says Texas energy giant Kinder Morgan doesn't have to follow all the rules of a city at the end of the route of its major west coast pipeline expansion project.

The regulator, the National Energy Board, announced on Thursday that the multinational energy company had won a battle to bypass Burnaby, B.C. bylaws. Kinder Morgan claims these bylaws are causing delays in the Trans Mountain pipeline construction and millions of dollars in losses.

Burnaby is one of the fiercest opponents of the pipeline and led by a mayor, Derek Corrigan, who has vowed to stand in front of bulldozers in an act of civil disobedience to stop its construction.

"The sections of the bylaws in question required Trans Mountain to obtain preliminary plan approvals and tree cutting permits for project-related work at Trans Mountain’s Burnaby Terminal, Westridge Marine Terminal, and at a nearby temporary infrastructure site," the regulator said in the statement.

The NEB, which has the powers of a federal court, told National Observer in a separate statement that it hadn't shared an explanation for its decision with either of the parties, nor did it know when this would be publicly released.

Kinder Morgan had urged the NEB to quash the bylaws, arguing that they were causing costly delays to the controversial project, approved in November last year by Prime Minister Justin Trudeau's government.

"We are pleased with the decision we have received from the NEB today, as it reinforces the view this federally approved project is in the national interest," Kinder Morgan Canada president, Ian Anderson, said in a statement sent to National Observer. "We await the NEB's decision on our second motion requiring the establishment of a generic process (establishing how to deal with similar cases in the future)."

The City of Burnaby has blamed the company’s incompetence for delays, claiming that Kinder Morgan has struggled to follow rules that apply to all developers.

Gregory McDade, a lawyer for the city, said the NEB has yanked Burnaby's powers to enforce its local rules in place to protect the municipality. He said the federal regulator should now explain whether it will take over these responsibilities.

"In our view, the evidence is quite clear and compelling on our side," McDade said in a phone interview with National Observer. "The facts and the law were on our side, but the NEB has sided with the company yet again, without giving any reasons at all."

He added that an appeal of the ruling was possible, but that the city would need to review the NEB's explanation before making that decision.

Supporters of the project say the pipeline expansion would support jobs and growth in Canada's oilpatch by giving oilsands producers new access to Asian markets through the Pacific coast. The project would triple the capacity of an existing line, allowing the company to ship up to 890,000 barrels of heavy oil per day from Alberta.

B.C. Environment Minister George Heyman told National Observer in an interview that he was angry and shocked to hear about the decision and believes that all Canadians should be concerned that Kinder Morgan will be allowed to break Burnaby's rules. He said that the NEB had previously said that Kinder Morgan would be required to get local permits needed to proceed with the project.

"I am shocked that the NEB changed their own conditions for this pipeline," he said. "I am shocked and I'm angry on behalf of all British Columbians... We will explore options for appeal."

Opponents of the project, including more than 17 First Nations, say the fossil fuel project is too risky and would be inconsistent with Trudeau's commitments to protect the environment, fight climate change and make decisions based on scientific evidence.

"It was ridiculous that Justin Trudeau approved the Kinder Morgan pipeline ignoring Indigenous rights, climate change and communities, but it's unconscionable that the NEB has given a Texas oil company permission to break local laws," said Clayton Thomas-Muller, a campaigner with 350.org, in a statement.

The group, 350.org, is an organization that campaigns for reductions of carbon pollution in order to stabilize the atmosphere.

"There's an old saying about moral responsibility and disobeying unjust laws, and right now, the law that Justin Trudeau and the NEB are upholding for the fossil fuel industry is looking pretty unjust," added Thomas-Muller.

Kinder Morgan is required to meet 157 conditions set by the federal government in order to proceed with the project. In September, the NEB intervened to stop some of Kinder Morgan's construction activity, since it was disrupting streams and preventing salmon from spawning without having the required federal permits.

Alberta Premier Rachel Notley said in a statement that she welcomed the NEB's latest ruling, noting that Canadian oil producers could likely sell their product at a higher price with access to new markets through the Trans Mountain pipeline.

"It gets us another step closer to shovels in the ground and more markets for our energy resources — something that benefits each and every Canadian," Notley said in the statement. "There is not a school, hospital, road, bus, bike lane or port anywhere in the country that does not owe something to Alberta's energy industry. We need to stop selling our resources at a discount and start getting full value.

"This pipeline comes with a world-class coastal protection plan, and the resources it carries will be produced under the strongest climate change action plan in Canada, if not all of North America."

The debate over Kinder Morgan has put Notley's government at odds with the B.C. government of Premier John Horgan, also a New Democrat. Horgan's government has been among those arguing that the pipeline is too risky and could cause damage to the local B.C. economy.

Kinder Morgan has warned that it is facing massive losses of millions of dollars every month, due to delays in getting permits. It said this has delayed its construction schedule and could cause the project to fail.

But Notley said she planned to pursue the fight to promote Kinder Morgan's plans.

"We are going to continue to make sure that the moderate, progressive majority of Canadians knows why this pipeline matters."

Editor's note: This article was updated at 6:50 p.m. ET with additional information and reaction from Kinder Morgan, the NEB, Premier Rachel Notley, and the city of Burnaby. It was updated again at 9:35 p.m. ET with new comments from British Columbia Environment Minister George Heyman.

Another perfect example of

Another perfect example of REGULATORY CAPTURE!

All this because Rachel says

All this because Rachel says BIG OIL could "likely" get a better price for the TAR in Asia. Not at all proven. Yet another of Justin's broken promises [to re-organize the NEB]
I can see the TAR CANAL across BC sooner than later, especially with China wanting access to ownership of MORE Canadian Oil and Gas Companies. Combine that with Heil Harper's FIPPA and what's left?.

“ .......giving oilsands producers new access to Asian markets through the Pacific coast. “ They have access now, but are not using it. Crude oil tankers used to load at the Burnaby terminal at a rate of 5 per month; the rate now is about one quarter of that .... and these tankers all go to the USA; none go to Asia. It is obvious that the companies can not get a better price in Asia.

More proof (as if we need it!

More proof (as if we need it!) that the NEB and hence both Federal and Provincial governance is in the back pocket of multinational corporations and reliably put the interests of the rich before those of civil society. Liberal, Conservative, NDP- a review of recent history should tell us that it doesn't matter who is in power in a neo liberal capitalist society. Democracy,egalitarianism, social justice and the environment have all been sacrificed on the alter of "Progress" and unfettered self interest.

Harpers petro state pushed by Twinkel Toes Trudeau,s Whet Dreams leaving West Coasters
With the Night Mares of Masive Damage to All Life as we Know It Time to Wake Up
stand Behind Burnaby Mayor. Derek Corrigan or With him in Front of the Bulldozers