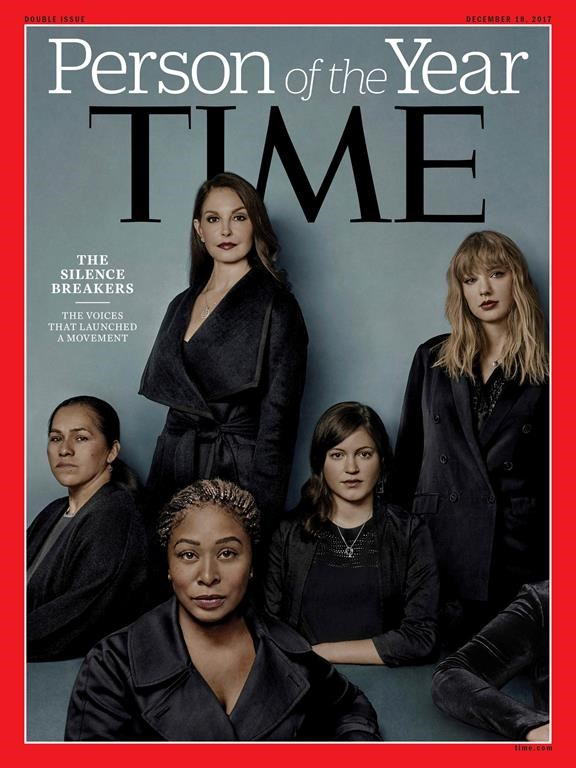 This image provided by Time magazine, shows the cover of the magazine's Person of the Year edition as "The Silence Breakers," those who have shared their stories about sexual assault and harassment. File photo by The Time Magazine via The Associated Press
Previous story
Next story

In the span of a single day, a long-building tidal wave made political and cultural landfall, with pent-up disgust over sexual abuse against women bursting onto an iconic cover of Time magazine, washing over Capitol Hill and potentially wiping away a once-promising political career.

After a solid few eons, the patriarchy had a rocky few hours Wednesday.

It began with Time naming as its Person of the Year, ''The Silence Breakers,'' a group of women so vast as to be innumerable — the famous, not-so-famous and downright powerless who this year raised their voices against sexual mistreatment.

The day ended with Democrats exploding the career of a formerly bright star: One after another, a group of lawmakers, most of them women, called on their colleague Al Franken to resign from the Senate and he has scheduled a career announcement Thursday.

That sets the stage for political standoffs ahead — with an Alabama senate race involving an accused child-molester and a president whose election was cited by Time magazine as the blow that broke open this cultural geyser.

Time's story points to the election of Donald Trump, despite numerous groping allegations and despite the video of him bragging about doing it, for inspiring a sense of outrage reflected in the massive women's march on the first day of his presidency.

Trump was the last Time Person of the Year.

''The women and men who have broken their silence span all races, all income classes, all occupations and virtually all corners of the globe. They might labour in California fields, or behind the front desk at New York City's regal Plaza Hotel, or in the European Parliament. They're part of a movement that has no formal name,'' said the cover story.

The piece tells the story of celebrities like Judd, who sounded the alarm years ago about alleged predator Harvey Weinstein. It describes actress Alyssa Milano tweeting an old slogan, coined years ago by social activist Tarana Burke, ''#MeToo,'' going to bed, waking up to see 30,000 messages about women sharing abuse stories and bursting into tears.

Swift talks about her lawsuit against a DJ who groped her. She wonders what abuses must be endured by less-powerful people than her. This is a recurring theme in the article — that millions of women experience this and can't afford to speak out.

''(Yet) dozens, then hundreds, then millions of women ... came forward with their own stories of harassment,'' said the story. ''Actors and writers and journalists and dishwashers and fruit pickers alike: they'd had enough. What had manifested as shame exploded into outrage. Fear became fury.''

The fury crashed into Capitol Hill.

First one senator, Democrat rising star Kirsten Gillibrand, then another, and another and finally the head of the party apparatus, called for Franken to resign, in a sudden but collaborative takedown effort that illustrated a shift in the politics of sexual misconduct.

A growing list of groping allegations appears set to fell the former comedian, now a two-term Minnesota senator. Via Twitter, Franken announced he would be making an announcement Thursday.

Gillibrand called this a moment of reckoning. She said it's too important to remain silent just because allegations involve a friend, colleague, partisan ally and, in the case of Franken, someone she's also fond of.

''Enough is enough,'' Gillibrand later told reporters, after posting a message on Facebook.

''When you start having to talk about the differences between sexual assault and sexual harassment and unwanted groping, you're having the wrong conversation. We need to draw a line in the sand and say, 'None of this is okay.'''

Democrats are now poised to flip the spotlight onto their opponents.

At the moment, Republicans are rallying behind a Senate candidate from Alabama who in addition to being fired twice as a judge, being anti-gay and wanting to bar Muslims from serving in Congress, faces numerous allegations of long-ago sexual advances on young girls.

Some Republicans are encouraging their party to join in the moment of moral cleansing and dump Roy Moore. One soon-to-be-retired senator, Jeff Flake, even donated $100 to Moore's Democrat opponent.

But the party apparatus is coalescing behind Moore.

That includes Trump. The president, who has just endorsed Moore and will speak at a rally near the Alabama border Friday, has more groping allegations against him than Franken and a Quinnipiac poll this week said 70 per cent of Americans want Congress to investigate the allegations against Trump.

But on Wednesday, Congress had the president's back.

A Democratic lawmaker tried advancing articles of impeachment against Trump, which referred to sexism but were mainly about alleged racism. The effort was defeated 364-58, with the vast majority of Democrats also protecting the man in the Oval Office.