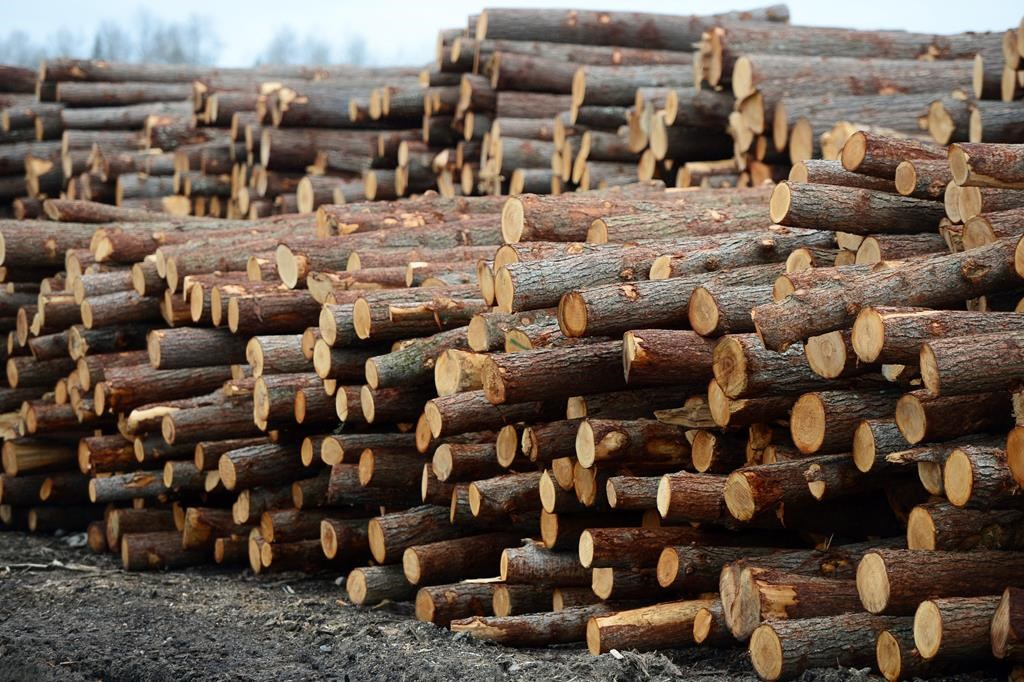 "We will stand shoulder to shoulder with the forestry sector in Canada," Natural Resources Minister Jim Carr told reporters in Ottawa.

Carr called the duties unnecessary and said Canada has already launched challenges under both the North American Free Trade Agreement and at the World Trade Organization. The NAFTA dispute panel has to make a ruling by next fall. The WTO process could take years.

"We have fought them before and we'll continue to defend Canada's interests," Carr said.

He added the government is helping the industry by offering a support package, including loan guarantees at commercial rates, and working to expand export markets and transform the industry.

In a 4-0 vote Thursday, the agency sided with the U.S. lumber coalition, which complained that Canadian lumber was subsidized and that it was dumped into the American market at artificially low prices.

Most Canadian producers will now pay a combined countervailing and anti-dumping rate of 20.83 per cent, down from 26.75 per cent in the preliminary determinations issued earlier this year.

Canadian producers have paid about $500 million in deposits for the duties thus far.

The duties have added to the cost of building a home in the United States. Canadian unions and lumber companies fear the issue will eventually cause layoffs.

A Resolute Forest Products spokesman said the U.S. will now hold large industry deposits as "ransom" in hope of pushing the Canadian government to sign a "bad deal."

"Sorry U.S., that's not going to happen. Canada is not going to be bullied into submission," Resolute's Seth Kursman said in an interview from Washington, D.C.

He added that the financial health of American firms is clear evidence that no injury has been suffered.

"The U.S. industry has been crowing about its prosperity for over a year. It is making more money than at any previous time in history."

The B.C. Lumber Trade Council said the ruling, while not unexpected, is "completely without merit."

Council president Susan Yurkovich said the process is biased in favour of the U.S. industry.

"We are confident that this latest decision by the ITC will again be reversed," she said in a news release.

Between 2001 and 2006, when the last softwood lumber dispute took place, it's believed about 15,000 jobs disappeared in the softwood industry.

Yurkovich said the U.S. Coalition's claims of injury "ring particularly hollow" given the strong financial performance the U.S. industry is facing and Canadian imports are lower than in 2006 when imports were deemed non-injurious.

"Our government strongly feels that these duties against New Brunswick and Canada's softwood lumber producers are unfair and unwarranted," he said in a statement.

"Today's ruling, though not unexpected, means that B.C. and Canadian forest companies must continue to pay unfair and unwarranted duties, to make U.S. lumber companies and land owners even richer at the expense of Canadian exporters and American consumers and builders," he said in a news release.

The U.S. Lumber Coalition, which launched a petition nearly a year ago, applauded the vote.

"The evidence presented to the ITC was clear — the massive subsidies that the Canadian government provides to its lumber industry and the dumping of lumber products into the U.S. market by Canadian companies cause real harm to U.S. producers and workers," stated co-chairman Jason Brochu.

"Now, with a level playing field, the U.S. lumber industry, and the 350,000 hardworking men and women who support it, can have the chance to compete fairly."

Reasons supporting the vote are expected to be released by mid-January, the commission said Thursday.

Trade data from the United States Department of Agriculture shows the amount of Canadian softwood imported was down eight per cent for first nine months of 2017, compared with the same period in 2016.

Trade data from Statistics Canada shows British Columbia producers are bearing the brunt of the drop, with softwood exports to the U.S. down about 33 per cent. The value of those exports was down 28 per cent.

British Columbia's wildfires last summer cut exports in July and August to about half what they were a year earlier.

Quebec exports to the U.S. actually went up three per cent and Ontario exports are up 11 per cent so far this year.

Quebec and Ontario wood exporters rely almost exclusively on U.S. markets, with 99 per cent of Ontario shipments of softwood and 98 per cent of Quebec's going to the United States.

Canada: Litigation looming if there's no softwood deal with the U.S.