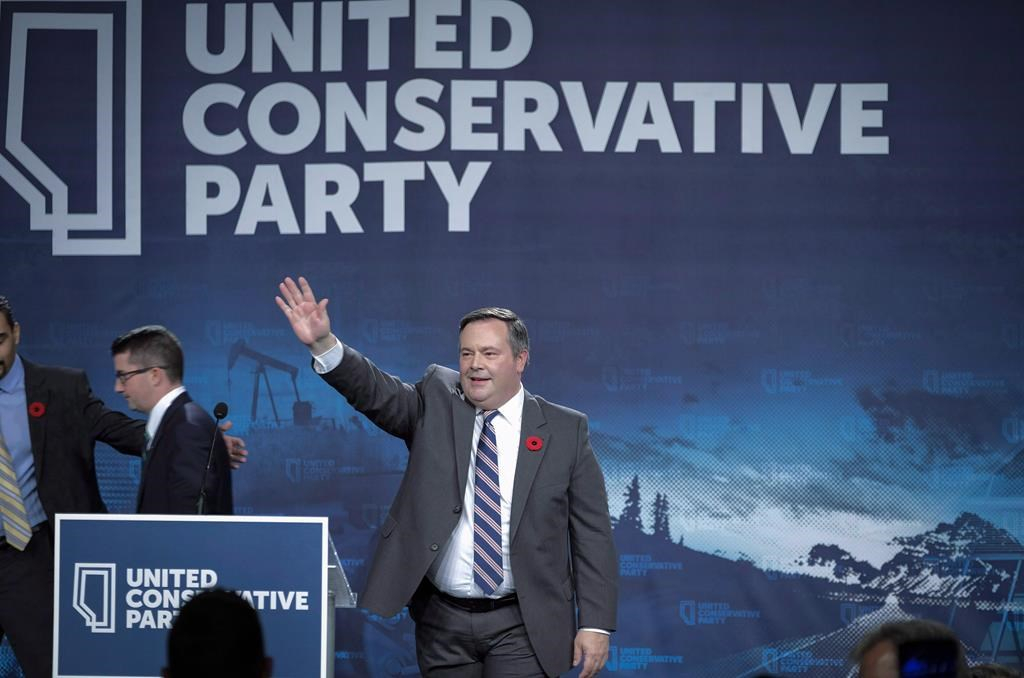 Jason Kenney celebrates his victory as the first official leader of the Alberta United Conservative Party in Calgary on October 28, 2017. File photo by The Canadian Press/Jeff McIntosh
Previous story
Next story

More than a year after resigning his seat in Parliament, Jason Kenney is hoping to take up a new one next week in the Alberta legislature.

The leader and architect of the United Conservative Party — a merger of the Progressive Conservative and Wildrose parties — is running in Thursday's provincial byelection. A victory would allow him to go head to head in the house with NDP Premier Rachel Notley.

The one-time federal Conservative cabinet minister is one of seven candidates in the Calgary Lougheed constituency, a sprawling community of palatial homes, multi-purpose dwellings and new neighbourhoods deep in the city's southwest.

It has traditionally voted Conservative.

Political observers say Kenney has the seat sewn up, but that suggestion makes him uneasy.

"The biggest threat to our campaign is that our voters think we have this in the bag," Kenney said. "There's never such a thing in an election. Surprises always can happen and our message to them is don't take that chance.

"We don't want it to go wrong. I hope to get every vote we can out there."

A Calgary political scientist says the Kenney name has drawn a slew of candidates to what would have normally been a run-of-the-mill byelection.

"As byelections that are unlikely to be actually competitive go, this is one that's generating a lot of activity ... a lot of excitement. It's maybe an indication of some of the sentiments that are bubbling out there," said Lori Williams from Mount Royal University.

"The other parties seem to be trying to take advantage of the profile of Jason Kenney to try and get their message out. They're staking out the landscape of what they represent and wanting to communicate that to Albertans right from the beginning."

New Democrat candidate van der Merwe said he's not surprised at the attention the byelection is getting and suggested it might not be as easy for Kenney as he thinks.

"He hasn't lived in Calgary for 10 years," said van der Merwe. "There was a sitting (legislature member) who gave up his seat and Kenney thinks he can just slide in there."

Another party leader is hoping the byelection will give him a forum in the legislature.

"Most political parties and most people with political aspirations realize a byelection is a crucial time to showcase your policies and provide choice to those voters," said Liberal Leader Khan, who doesn't have a seat now.

"It begs the question as to why you would not get involved in the byelection, especially one as high profile as this."

The greatest challenge facing candidates may not be each other — it may be voter apathy.

One longtime constituency resident approached recently was aware of the byelection, but that was about it.

"I don't know who's running. I don't know anything about what's going on honestly," said Daryl Beveridge, who was standing near a long row of election signs on a boulevard.

Beveridge said he wasn't sure he would cast a ballot on Thursday since he hasn't been a "very conscientious voter" in the past.

"For me, politics is something that we seem to have no control over."

But he knows who he wouldn't vote for.

"We have an NDP government that's now making smaller businesses become harder to survive with this minimum wage and all the other decisions," he said.

Michelle Smith said she probably won't be voting either.

"I don't really follow it that much. We've had a couple of people come to the door but that's it," she said. "Since I don't follow it, I really don't pay much attention to what they're saying."

Apathy is what will destroy

Apathy is what will destroy our democracy.