Addiction is not a crime, nor a moral failure 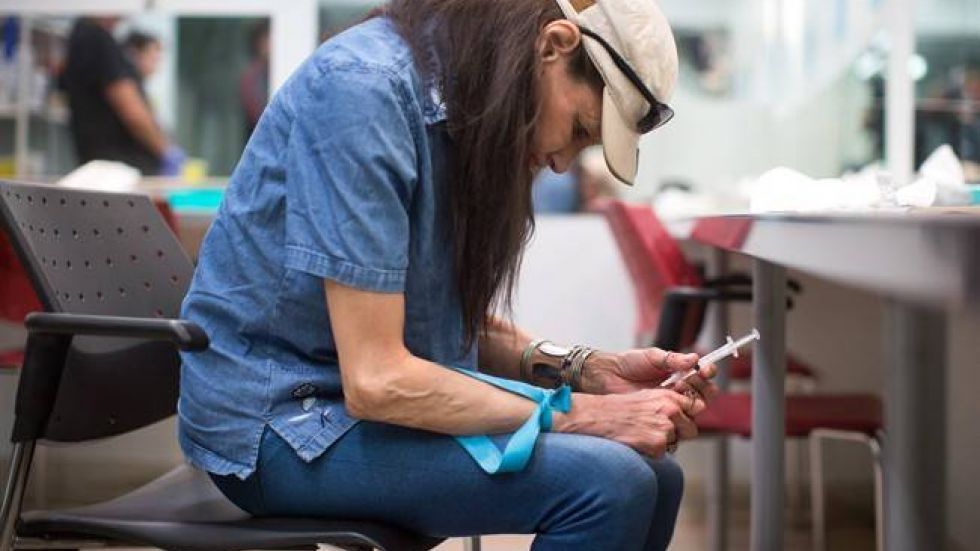 These days, we as a society are talking and writing a lot about deaths related to addiction, and the drugs that fuel them. But we've been glacially slow to deal with this human tragedy because, I would suggest, of deep-seated, long-standing and widespread prejudice against addicts.

Writers like physician Gabor Maté and British journalist Johan Hari have advanced cogent and essentially unassailable arguments for a better, more rational and humane – and effective – approach to drug addiction. The impact of their words, however, has been blunted in many cases by political and bureaucratic inertia – driven by many decades of embedded emotional bias.

Every day, the stats mount up worldwide. I continue to see headlines like: “Province on pace for more than 1,400 overdose deaths in 2017,” "Fentanyl related deaths remain a serious problem in Alberta," “Synthetic fentanyl deaths rise in Americans opioid epidemic" and “Fentanyl deaths on the rise in Australia.”

And alongside the grim figures, personal and collective stories of tragedy proliferate.

As the horrendous numbers of deaths from fentanyl overdoses grow almost daily, and as the media start to report on individual struggles with addiction, efforts to deal with the problem are still hampered by widespread often unspoken negativity towards addicts and the issue of addiction. A study by Johns Hopkins University three years ago showed that a majority of people feel that drug addiction is a sign of being “a bad or weak person.” A study in Britain a few years before that found that the general public characterized addicts as “an trustworthy, deceitful and unreliable,” and failed to acknowledge that they had mental health problems.

Policymakers and politicians are members of that same public, and they still tend to be openly, or more often internally (or even unconsciously) afflicted by the same belief.

A more recent 2016 study, carried out at the request of the Scottish government, showed that while understanding is growing about individuals suffering from drug addiction, 42 per cent still felt that “one of the main causes of drug dependence is a lack of self-discipline and willpower.”

There is no question that a broad shift in attitude – from blame to informed sympathy – is slowly taking place in the general public; as one example, American former heroin addict Jack Kelly, who in his twenties was afraid to tell anyone about his past history of addiction, is now, at age 33, advising local and state governments in Massachusetts on policy related to health and addiction. And stories about recovery from drug addiction are now revealing, after the fact, the humanity of those afflicted. They are helping to break the cultural stereotype of the morally degenerate addict.

But progress is agonizingly slow, as governments in Canada and elsewhere appear to have the lingering perception of addicts as criminals or failed persons. They have dragged their feet, hiding behind the usual bureaucratic practice of dotting “i’s” and crossing “t’s.” There is no rapid proliferation of safe injection sites (which some public officials still openly decry as pandering to addiction) despite abundant evidence of their value in facilitating the path to ending addiction. There is a gradual move towards mass distribution of injectable naloxone, but firm consensus statements from political leaders that addiction is unequivocally a mental health problem, and actions to enhance mental health services (not with more drugs, but with compassionate, person-centred care) are still in abeyance.

Former Prime Minister Stephen Harper, for example, sounded supremely confident when he spoke out against safe injection sites several years ago, despite possessing strong medical evidence of their positive health and social impacts.

Leaders of other parties have been more supportive of safe injection sites and other measures, and of recognizing drug addiction is a mental health problem, but removing the criminal stigma associated with drug use is still generally impeded – even though doing so has been shown to massively reduce drug use in Portugal and on a more limited scale in the Netherlands, Germany, Switzerland and Denmark.

in the United States, addiction has become so overwhelmingly politicized at the federal level that it is difficult to discern any sort of consistent approach or understanding.

Let’s say a new kind of household disinfectant – very good at killing bacteria and viruses – has been found to cause sickness and even occasional deaths among homeowners in this country. We now know that spraying or wiping down surfaces in homes with disinfectant is not a particularly useful practice; some disinfectants are actually worse for our health than the bugs they were meant to destroy.

Would the federal or provincial governments characterize homeowners who had chosen this dangerous product as addicted clean freaks, lacking “self-discipline and willpower” – especially if they went on using it after learning that it was unnecessary and potentially harmful? Would those homeowners who continued to use the product, despite its hazards, be shunned as "addicts?"

Of course not. All levels of government would take swift action to address the problem, immediately taking the product off the market, and viewing homeowners in a very sympathetic light – essentially as “innocent victims.”

But no such unhesitating social embrace is offered to drug addicts, despite clear evidence that this is the most effective response to their behaviour.

Drug addicts use chemicals that, in a medical setting – like disinfectants – can be very useful. But their use in the setting of addiction, along with the people who are addicted to them, are relegated to the murky world of criminality, and thus users are compelled to deny employing them in most settings, or engage in clandestine practices. If indigent, they are thrust into desperate and often illegal means to obtain them, often prostituting themselves in order to obtain drugs. Their use is driven out of sight of the rest of society, taking place in alleyways, flop houses and other degraded and degrading settings.

As a direct result of our easy condemnatory attitudes, people with drug addiction die unnecessary and entirely preventable deaths.

In Gabor Mate’s insightful book “In the Realm of Hungry Ghosts” he points out that addiction is a universal phenomenon – essentially a negative behaviour that is an outgrowth of the universal and entirely normal daily reliance on habits to get us through the day. Addictions are habits “where we constantly seek something outside ourselves to curb an insatiable yearning for relief or fulfillment. The aching emptiness is perpetual because the substances, objects or pursuits we hope will soothe it are not what we really need.”

Addictions are simply habits that lead to negative health impacts, arising out of a need to reduce or control even greater mental or physical pain. The patterns of addiction – drugs, alcohol, cigarettes, over-eating, compulsive buying of consumer goods (“hoarding” in its most extreme form) – are diverse, but their function is always the same: they divert attention away from internal suffering.

Irrefutable evidence confirms that the deepest roots of most addiction lie in physical or psychological pain experienced in childhood, from what is known in the healthcare field as ACE’s – Adverse Childhood Experiences. The original ACE study, carried out in 1998 by the Kaiser Permanente health maintenance organization along with the US Centers for Disease Control, studied seven categories of traumatic experiences in childhood including psychological, physical and sexual abuse, as well as circumstantial harms (such as death of a parent, parental divorce or alcoholism). It found that the presence of four or more of these traumatic exposures resulted in “four- to 12-fold increased health risks for alcoholism, drug abuse, depression, and suicide attempt” as well as impaired physical health and chronic disease.

We do not blame children for being sexually abused. We do not stigmatize married adults for ending one relationship and seeking another. (We actually used to blame women, routinely, but those days have thankfully ended.) We do not punish people for being depressed. We no longer dismiss suicide as a sign of nothing more than “a lack of self-discipline and willpower,” carried out by a “bad or weak person.” And yet, we still blame and stigmatize and punish and dismiss people who are addicted.

The fentanyl crisis hasn’t been a random event

Physical pain can also be a starting point specifically for opioid addiction. But in order to convert an occasional occurrence into the epidemic we are now facing, two other factors have played a major role.

The first is aggressive marketing by an amoral industry bent on selling products that increase profits – which with respect to the fentanyl problem, just happened to be opioid medications. The current opioid crisis is most severe in countries, such as the USA and Canada, where pharmaceutical giants have in recent years aggressively marketed opioid painkillers, especially the drug OxyContin. But such marketing programs would have failed miserably without something else.

This second factor is the susceptibility of physicians to blandishments and marketing activities from Big Pharma. The drug industry spends enormous amounts of money wooing doctors, knowing that such expense is justified because it induces and shapes our prescribing habits. In the case of opioid prescribing, the industry ramped up its promotional campaigns, absolutely confident that such activities would be rewarded with increased profits.

We doctors around the world, trained in the “allopathic” system so beloved in industrial societies, do need to address our professional “addiction” to prescribing drugs in general, and to listening overly attentively, but with inadequate critical thinking, to the siren calls of the drug industry. Until we take this step across the board, as an entire profession, we are unwitting facilitators of much suffering and ill health, and even death.

Change is coming, but it must come faster

In the 21st century, the human family is slowly learning to be more open-minded, more able to extend compassion to others who are different from ourselves, more inclined to look deeper into the root causes of things rather than to be attracted to surface characteristics.

We are more inclined to believe that the rights that we ourselves cherish should be extended to all others. Hateful persecution of LGBTQSI persons is increasingly being called out. Genocidal actions against Indigenous peoples are finally beginning to be addressed.

We are able to see that careful and critical thinking – and the actions that such thinking entails – goes a long way make the world a better place, and human society more robust and resilient.

That’s why our inability to see drug addiction, and the persons who suffer from it, as a problem brought on by our own conduct as a society, is so troubling.

It is time to act decisively and realistically and humanely in dealing with drug addiction, before more lives are unnecessarily lost.