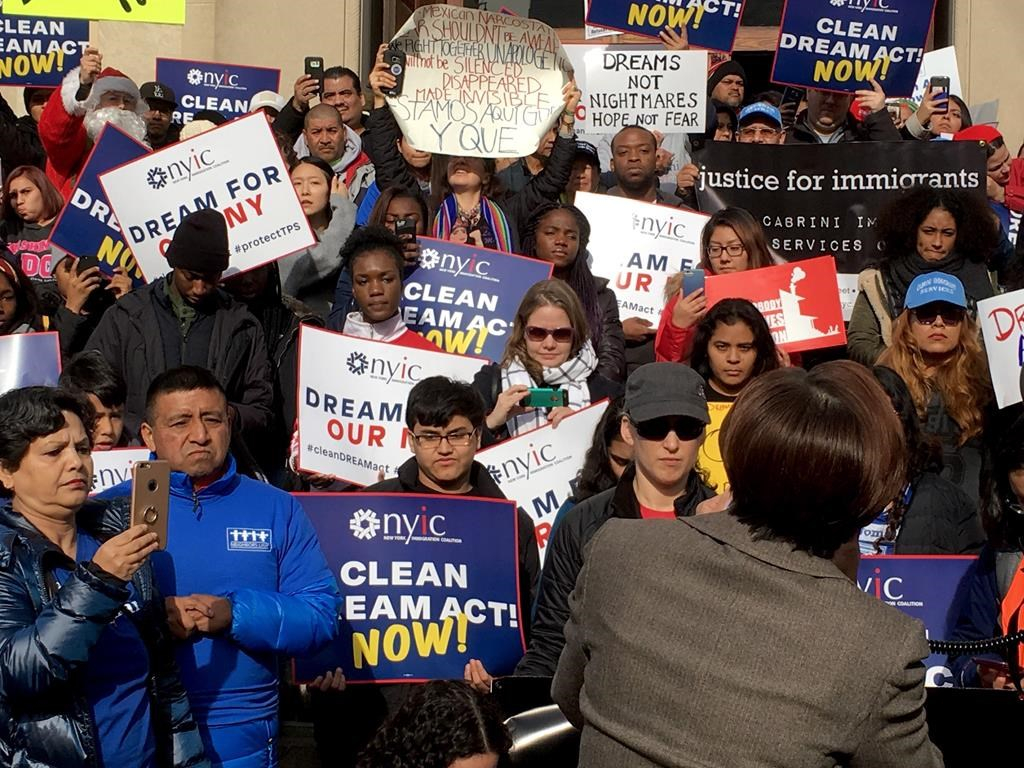 Hundreds of thousands of young lives have suddenly become bargaining chips, the fate of undocumented migrants like Francis Madi now hanging in the balance of high-stakes haggling between two political parties.

It could be decided by Christmas.

Despite having only once visited her native Venezuela since she was brought to the U.S. 15 years ago by her mother, Madi is among the 800,000 people now facing the prospect of being sent back forever.

They are perhaps those most affected by the election of Donald Trump — Madi recalls the feeling of dread when she realized on Nov. 8. 2016, that he was going to win. Later, she saw him announce the cancellation of her status. Now, she's pinning her hopes on a bipartisan deal.

"There's a lot of fear and anxiety about what's going to happen,'' said Madi, now a college graduate, writer, actress and activist.

That's the day the U.S. federal government will shut down unless the parties agree to a funding bill to keep the government operating. Democrats have made several demands, including something called the Development, Relief, and Education for Alien Minors Act — better known as protection for so-called Dreamers, like Madi.

It would guarantee that young people illegally brought to the U.S. by their parents, who have gone to school and have a clean criminal record, would have legal right to remain and work in the U.S.

Barack Obama offered those protections in an executive order, but they never made it through Congress as legislation; Trump recently announced the program was being cancelled; now the phase-out is set to begin in the spring.

That's unless the parties reach a deal first.

With that race against the clock, Democrats are trying to force the issue now, into a must-pass spending bill, using their crucial votes in the Senate. Senior legislator Nancy Pelosi promised to force the issue: "We will not leave (for the holidays) without a ... fix."

It's easier said than done.

The parties are being pulled in opposite directions: a Republican base that either opposes a deal, or at least wants it attached to funding increases for border enforcement, versus progressives demanding a deal without conditions.

That was illustrated at a pro-immigrant protest last week.

Marchers outside the U.S. Capitol disparaged the idea of accepting tradeoffs like funding for deportation agents, or Trump's coveted Mexico border wall, deriding it as an intergenerational betrayal.

One sign described how such a deal might help young people, but hurt other immigrants: "Don't use me to dehumanize my family." Unless they get their straight-up bill, a so-called "Clean Dream Act," they want Democrats to force a shutdown.

Outside the Capitol, they chanted, in a call-and-response that began, "If we don’t get it," and concluded, "Shut it down."

Trump has signalled a willingness to make a deal.

But he has conditions. He wants money for his border wall with Mexico; more funding for immigration enforcement and deportation; a crackdown on so-called chain migration, meaning curbing immigration rights for immigrants' families, and he wants it all negotiated separately, away from this must-pass funding bill.

For starters, helping Dreamers is popular. A Fox poll recently said 86 per cent of Americans want them to have work status. Also, one longtime advocate says any delay, or bargaining, could sink this reform.

Frank Sharry says that is the goal of anti-immigration hawks, who are currently using two strategies: One is to use negotiations to demand poison pills like deportation funding, the other is to delay until legal permits start expiring.

The immigration advocate says he's seen the pattern repeat itself over the years. Whenever Republican leaders get close to a reform deal, they get pulled away at the last second by the hardline wing of the party.

That's why it's now or never, Sharry says of the funding bill: "We're deeply concerned that if we don't pass it before the holidays, that we're going to end up with a lot of Dreamers for whom this is their last holidays in America."

But some analysts suggest this fight is, in fact, no guaranteed winner for Democrats.

The fivethirtyeight.com site compiled polling data to argue voters might not support Dreamers enough to back a shutdown. While people want to help Dreamers, surveys show the issue is a low priority and, further, most want extra border security in a deal.

It couldn't be a higher priority for Sammy Herrera.

The 16-year-old came to Washington to protest. While she was born in the U.S., and is American, she feels personally touched by this issue. She has two friends in New York, in college, studying medicine and psychology, fearing deportation.

She wants to work in immigration law someday.

"It hurts me as well, even though I’m a citizen of this country. I'm still discriminated against, because of these stereotypes (against fellow Latinos), that have been thrown around by our president... It makes me ashamed to be American."