Montreal versus the rest of Quebec: new divisions ahead of the 2018 election 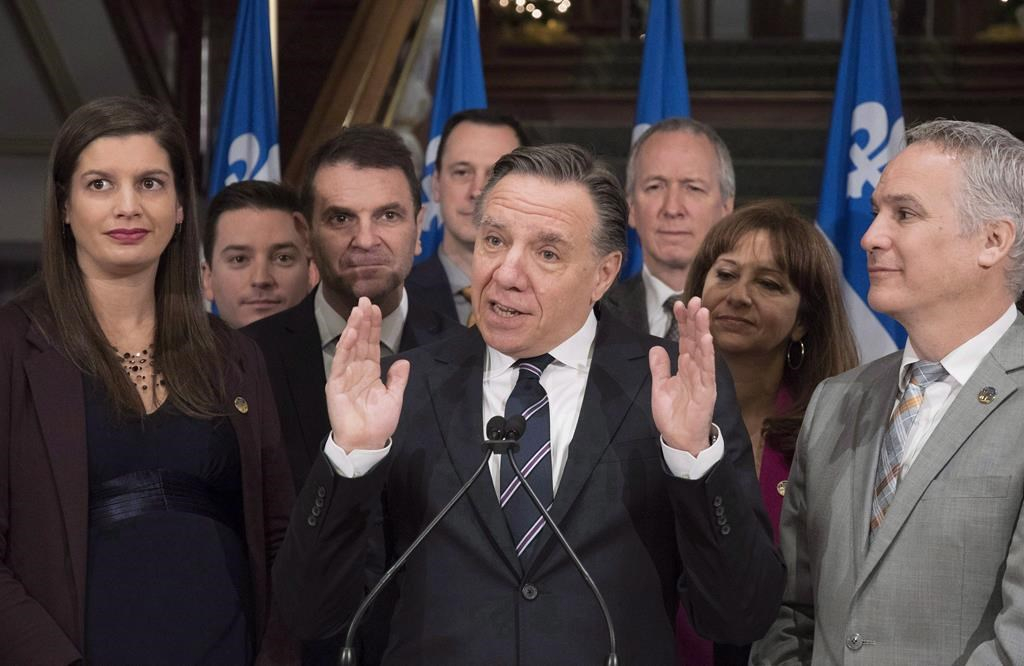 But the 10 months leading up to October's provincial election will be different.

There is a new division in Quebec, between those living in Montreal and citizens elsewhere in the province.

The consistent and sustained rise in the polls of the legislature's third-largest party, the federalist Coalition Avenir Quebec, reflects this new reality.

Polling indicates the six-year-old party has a serious shot at government — including a majority — without needing to win a single seat on the island of Montreal, a breakdown that hasn't happened in Quebec's modern political history.

"Whether or not it's possible to win without Montreal, I hope to — and I will — have a certain number of ridings on the island," Coalition Leader François Legault said during an end-of-year interview with The Canadian Press.

Quebec has 125 ridings, including 27 on the island of Montreal. A party needs to win 63 seats to form a majority government.

Philippe Fournier, an astrophysicist who runs the poll-aggregating blog Qc125.com, said it's "absolutely" possible for the (Coalition) to win without the metropolis.

"There are 98 seats outside Montreal," said Fournier, whose statistical skills have attracted serious attention across the province. "Can the (Coalition) win 63 of them? The answer is absolutely they can. We are in uncharted territory."

This new territory was created in part by Parti Quebecois Leader Jean-François Lisée, who has promised to not hold a referendum if his party wins in October.

"Mr. Lisee has taken away the scarecrow of the Liberal party," Legault said. "Quebecers are now free of this question that has divided them for the past 50 years."

Fournier said he initially thought Lisée's strategy was good politics when the PQ leader introduced the no-referendum idea 12 months ago.

"But in hindsight, (PQ voters) are saying, if there is no referendum then we'll just vote elsewhere," Fournier said, referring to the Coalition and to a lesser extent, Quebec solidaire, a far-left sovereigntist party popular in parts of Montreal but that has little support elsewhere.

Aside from a PQ minority government between 2012 and 2014, the Liberals have been in power since 2003. The anti-Liberal vote, according to the polls, seems to be crystallizing behind the Coalition — at the expense of Lisée's party.

During his end-of-year news conference, Lisée was asked if his decision to steer clear of a referendum until at least 2022 has unshackled sovereigntists from his party.

"There is good news and bad news," Lisée replied. "The good news is that people want to get rid of the Liberals. The bad news is that for now, they are looking at the (Coalition)."

Quebec, however, is enjoying its lowest unemployment rate since the 1970s and Premier Philippe Couillard is expected to table a fourth consecutive balanced budget in the spring.

The final budget of Couillard's first mandate is also expected to include pre-election goodies for Quebecers tempted to vote elsewhere.

In his end-of-year news conference, Couillard said he will "impress" Quebecers with his plan for a second mandate, adding "I am a lot tougher than people think."

The Coalition's political power was revealed in October's byelection victory in a long-held Liberal riding in Quebec City. More than 50 per cent of voters chose Legault's party, compared with 19 per cent for the Liberals. Turnout was 52 per cent.

Legault's policies reflect a base outside Quebec's metropolis.

Statistics Canada, in its demographic projections, notes that by 2031, roughly 30 per cent of Montreal's population will be composed of visible minorities, while they will account for fewer than five per cent in places such as Quebec City, Trois-Rivieres and Saguenay.

"We have exceeded our capacity for integration," he said, referring to the disproportionately high unemployment rate for newcomers. "For a few years, let's lower the numbers without reducing the budget, so there is more money for immigrants."

Bill 62 requires all people to remove a face covering while receiving or giving a state service — a position widely criticized as targeting Quebec's Muslims, the majority of whom live in Montreal.

If the Coalition wins in 2018, Legault promises his party will table legislation banning all public employees "in positions of authority" such as police offers and judges from wearing religious symbols.

"If we want to avoid racism, intolerance, it's important to have clear rules," he said. "And it should have been done 10 years ago. The goal is to move on to other things."

Legault says Quebecers are very welcoming people but are worried about the importation of radical Islam.

"Since the foundation of Montreal, there were Italians, Greeks, Jews — people from all different communities and they have always been part of Quebec society," he said.

"The worries came, really, regarding terrorist acts internationally and Quebecers, like everyone in the world, want to have certain rules in order to prevent the entry of these eventual terrorists."

While Legault's policies reflect a base outside Montreal, they also tend to represent the views of young Quebecers, who are less interested in questions of identity and sovereignty and more interested in wealth creation and lower taxes.

"It's a question of pride and ambition," Legault says, regarding his desire to make Quebecers richer. "I hope that in a few years, Quebec becomes as rich as the rest of the country so we have a certain autonomy in our discussions with Ottawa."