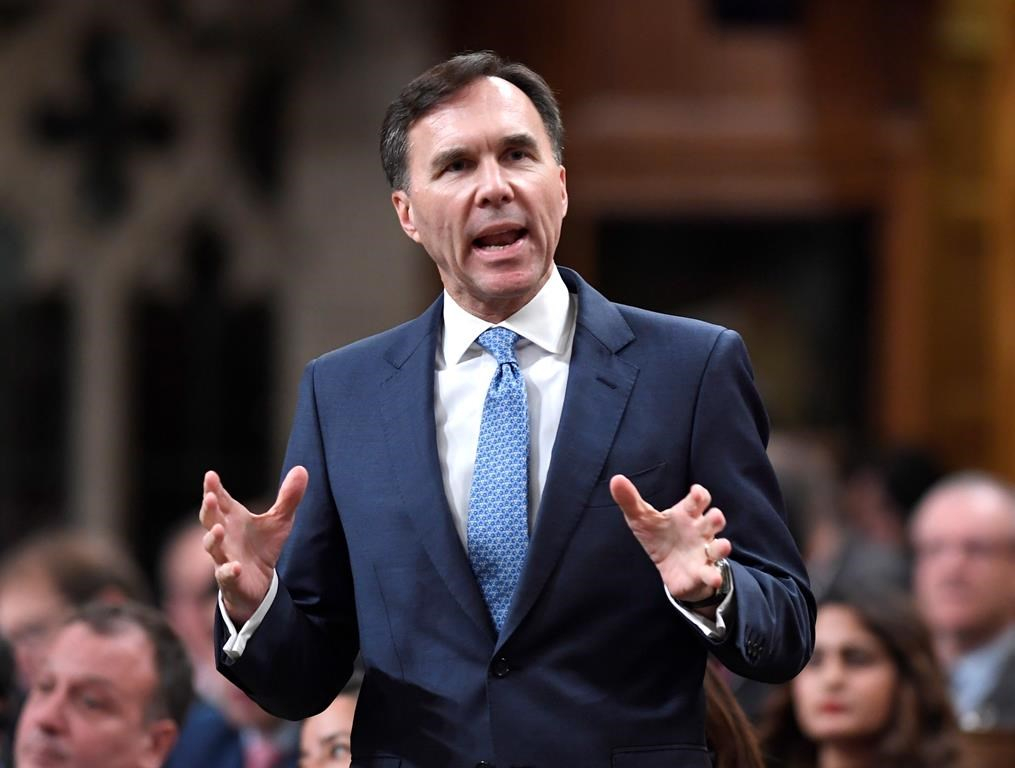 Minister of Finance Bill Morneau rises during Question Period in the House of Commons on Parliament Hill in Ottawa on Monday, Nov. 20, 2017. File photo by The Canadian Press/Justin Tang
Previous story
Next story

When 2017 dawned, Finance Minister Bill Morneau was presiding over the early stages of an economic resurgence that would lift growth beyond expectations, create jobs at an impressive clip and help shave billions off his projected budgetary deficits.

What a difference a year makes.

As the holidays loom, Prime Minister Justin Trudeau's financial lieutenant is likely licking his wounds after months spent at the centre of several headline-hogging controversies that overshadowed the good economic news.

Morneau's challenges in the second half of 2017 kept him in the news for months, making him an easy choice for the journalists who voted him Canada's 2017 Business Newsmaker of the Year in the annual poll of the country's newsrooms by The Canadian Press.

He won 50 per cent of the votes in a field of nine candidates that also included his counterpart in foreign affairs, Chrystia Freeland, Bombardier CEO Alain Bellemare and the proverbial thorn in Morneau's side: the small business owner.

Morneau's toughest stretch began slowly, with a contentious tax-reform plan released quietly in the dead of summer. Over the following weeks, however, a surge of complaints poured in from enraged business owners, doctors, tax experts and even backbenchers within his own Liberal party.

Later, the wealthy former businessman was swarmed by ethical questions over how he handled his substantial personal assets after coming into office. More recently, he faced conflict-of-interest allegations that led the federal ethics commissioner to launch a formal examination and the Opposition's call for his resignation.

Morneau has come to symbolize either unaccountable wealth and excess, or the fight against them, said Daniel Tencer, senior business editor of Huffington Post Canada.

"Certainly, the opposition in Parliament tried to paint Morneau as being an out-of-touch Liberal elitist — wealthy and trying to hide his own wealth from the public," Tencer said.

"Whether or not that is true, Bill Morneau vehemently disagreed with that portrayal — and yet that image seems to be sticking with him, at least to some extent."

Matt Goerzen, managing editor of the Brandon Sun, said the federal tax proposals erupted into a top concern for his readership. The newspaper received a flood of angry comments and letters, particularly from local businesses and the agricultural sector.

"Minister Morneau has been in the eye of that storm as the focus changed from the federal tax changes to Morneau's personal business interests," Goerzen wrote.

"This ongoing story has eaten up a lot of ink and airtime."

Morneau began attracting national attention as the uproar over his tax proposals grew louder at the end of the summer.

He argued the reforms were designed to inject fairness into the tax system for the middle class. The primary goal of the changes, Morneau has insisted, is to target wealthy individuals who have used the incorporation of small businesses to gain an unfair tax advantage.

But amid the concerns, Morneau was eventually forced to scale back and even abandon elements of the plan.

"It's been an intense experience. The tax changes, obviously, were met with a really strong reaction from the business community — my sense is that where we ended was in a really good place," Morneau said in an interview, referring to the revisions.

"I've learned from this experience that we have to be very good at communicating to Canadians what it is that we're trying to achieve. Clearly, that's got to be a critically important lesson that comes out of the discussion and the concerns that Canadians had."

As the tax-proposal story unfolded, questions about the minister's personal assets began to surface.

The federal ethics commissioner fined Morneau $200 for failing to disclose his role as a director in a private corporation that owns a villa in France. Morneau had disclosed his ownership of the villa to Mary Dawson but, thanks to what his office called an administrative oversight, failed to mention the ownership structure itself.

Questions then focused on his shares in Morneau Shepell, the large human resources firm he helped build with his father and presided over as executive chairman until his election win in the fall of 2015.

The criticism intensified when word spread that he hadn't placed his Morneau Shepell holdings into a blind trust after being named to cabinet — a decision Morneau insisted was framed by Dawson's own advice.

She advised him in 2015 that he did not need to divest the shares or put them in a blind trust because they were indirectly held in a numbered company. Dawson recommended instead that he set up a conflict-of-interest screen to ensure he was not involved in any discussion or decision that could benefit Morneau Shepell.

In response to the controversy, Morneau sold off the remainder of his Morneau Shepell shares, which were worth about $21 million. He donated to charity the difference between what the shares were worth at the time of the sale and their value in 2015 when he was first elected — estimated at about $5 million — and promised to place his other assets in a blind trust.

"I don't think that there's anything that I could have done differently," Morneau said of the ethics controversy.

"I think that what's important here is that I acknowledged that people did have a perception of the potential for conflict and that perception was important. So, in hindsight I think it was appropriate to follow the commissioner's advice, which I did, and it was important for me to also deal with the perception issue. I've done both of those.

"Could I have done it faster? Maybe."

Then came conflict-of-interest allegations over proposed pension reform that was spearheaded by Morneau. Opponents allege the legislation would have brought him personal financial benefit, given his links to Morneau Shepell.

Morneau denied any conflicts; Dawson launched a formal examination into the matter.

The Conservatives accused him of selling off Morneau Shepell stock in late 2015, a week before his own policy announcement drove the value of the shares down by half a million dollars.

An angry Morneau — conscious of the irony of being raked over the coals for selling shares by the same critics who derided him for owning them — railed against the insinuations of insider trading, and threatened to sue anyone who dared make them without the legal shield of parliamentary privilege.

Trudeau, however, stands by his man.

How long that confidence lasts remains an open question.

"It's a been a calamitous year for Bill Morneau," said Bill McGuire, editor of the editorial and opinion pages at the Guardian in Charlottetown, P.E.I.

"Perhaps a less capable minister would have been fired or tendered a resignation months ago. Yet, he remains in control. He certainly deserves the title as newsmaker of the year."

Provinces confront Morneau in feud with feds over marijuana-proceeds pot

Tories call for Morneau to resign, but Trudeau defends his finance minister