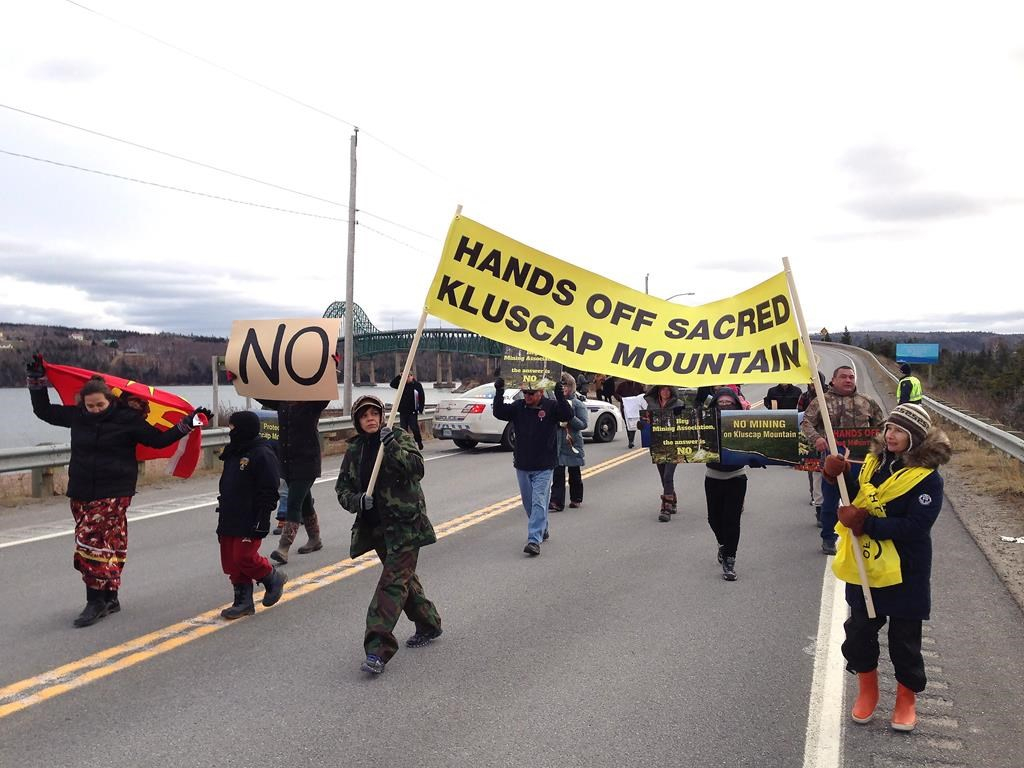 Dozens of protesters are taking a stand against mining projects on a Cape Breton mountain that is considered sacred by the Mi'kmaq.

Raymond Plourde of the Ecology Action Centre said traffic on Cape Breton's Seal Island Bridge was slowed in response to Saturday's rally against mining or quarrying of Kellys Mountain, and the roads were temporarily shut down by police during a Mi'kmaq ceremony.

Protesters walked down the middle of the road draped in flags and beating drums. Two people held up a sign reading "Hands off sacred Kluscap Mountain," referring to Mi'kmaq name for the mountain, which is protected by the province as a Kluscap wilderness area.

"(The mountain) is our sacred place and it is home of our sacred being," Elizabeth Marshall of Eskasoni First Nation said in a phone interview.

"To destroy that place for profit is the same thing as me going over to the Vatican and chipping off the gold, and the silvers and the rubies and the diamonds ... and maybe taking a couple of Michelangelos home."

The Nova Scotia Mining Association has expressed hope that the provincial government will revisit the status of the protected area, saying the policy has harmed Cape Breton's economy.

"We need to have a practical dialogue about protecting land and protecting jobs," Sean Kirby, the mining association's executive director, said in a statement on Saturday. "Acknowledging that the process for choosing protected lands was not perfect is a good place to start."

Kirby welcomed the protesters' "contribution" to the public dialogue, but said despite their fears, there is no proposal to build a quarry on the mountain even though reviving the shelved project could create 80 jobs.

Plourde dismissed the mining association's concerns about protected areas impeding economic opportunities, saying that 80 per cent of the province is free to be developed, including some of the most mineral-rich areas.

"If they got complete access to all the protected areas, it wouldn't result in any significant more investment in this province," he said in a phone interview. "I don't think their claims of economic harm bear any sort of scrutiny at all."

Plourde accused the mining association of lobbying the Nova Scotia government to upend long-settled issues surrounding protected areas in a bid to boost corporate interests at the expense of the Mi'kmaq.

"The audacity is breathtaking," he said. "They seem to be deliberately ignoring that history and reality, and acting as if somehow this is some new thing and somehow unfair."

Organizers said another demonstration was held at the mining association's headquarters in Ingramport, N.S., on Saturday.

Editor's note: This article was updated with a new headline to correct that the protest occurred at a proposed mining site and not at a natural gas storage site.