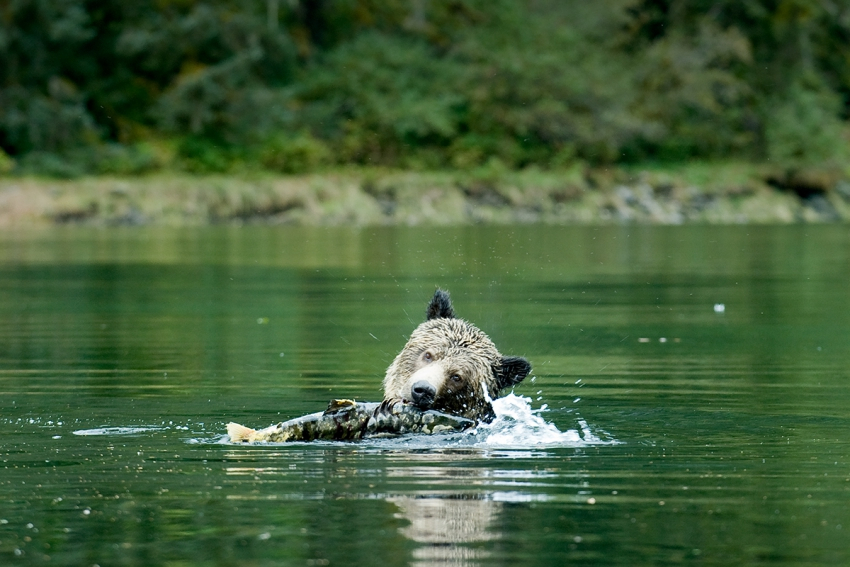 The British Columbia government announced on Monday it was ending the trophy hunt of grizzly bears throughout the province.

"Through consultations this past fall, we have listened to what British Columbians have to say on this issue and it is abundantly clear that the grizzly hunt is not in line with their values," said Doug Donaldson, Minister of Forests, Lands, Natural Resource Operations and Rural Development. "Our government continues to support hunting in this province and recognizes our hunting heritage is of great importance to many British Columbians."

The spring grizzly bear hunt was scheduled to open on April 1, 2018, but the ban on hunting for resident and non-resident hunters takes effect immediately.

"Our government is committed to improving wildlife management in B.C., and today's announcement, along with a focused grizzly bear management plan, are the first steps in protecting one of our most iconic species," Environment and Climate Change Strategy Minister George Heyman said. "We also want to promote the healthy grizzly bear viewing economy in B.C. and give everyone the tremendous opportunity to see these incredible animals in their natural habitat."

"We're really excited," Kitasoo/Xai'xais Nation Chief Doug Neasloss told National Observer. "We want to continue to work with the province on this issue. I think it's a no-brainer to focus instead on bear-viewing. There's economic analysis that supports this."

"This is a very smart move by the NDP," he said. "There's a growing (bear-viewing) tourism economy, and B.C. has one of the best wildlife viewing in the world."

First Nations will still be able to harvest grizzly bears pursuant to Aboriginal rights for food, social, or ceremonial purposes, or treaty rights.

"We're elated," said Raincoast Conservation spokesman Brian Falconer. "We've been working on this for 25 years, and this is really something the people of B.C. have wanted."

According to recent polls, over 70 per cent of B.C. residents, including hunters, support a ban on grizzly hunting. According to the poll, nearly 80 per cent of women polled said they approved.

Falconer said this shows the B.C. government is moving toward an economy based on bear-viewing.

"They listened to the consultation, and it's an investment in a whole new economy," Falconer said. "The government needs to be congratulated for this."

The Guide Outfitters Association of BC, a strong advocate of grizzly hunting in the province, expressed opposition to the ban.

"We're very disappointed with the province. It's going to have repercussions for our guide outfitters, airlines, restaurants and hotels," Scott Ellis, the executive director of the association, told National Observer. "Hunting generates $350 million a year in B.C."

Ellis said he doesn't have exact details on how much of that is specifically from grizzly bear hunting. But he said the loss of grizzly bear hunting would have a significant impact on the hunting industry in B.C. regardless. According to the GOABC, a typical grizzly hunt costs around $25,000, not including hotels, flights and other expenses.

Ellis expressed frustration that his association's efforts to have a positive impact on conservation weren't taken into consideration by the government.

"When you manage wildlife, it's a very complex and complicated job," Ellis said. "When you make decisions on politics based on emotions, it's not good for the province. We've got some of the best scientists in the word and a robust system of tracking...what this decision says to us is, none of that matters."

As part of its 2017 election platform, the New Democratic Party of British Columbia had pledged to ban all trophy hunting of grizzly bears in the province, which was allowed under the previous BC Liberal government. BC Green Party leader Andrew Weaver had also tried in 2015 to introduce a private member bill to curb trophy hunting of grizzlies.

More than 300 grizzly bears are killed every year, according to data compiled by the David Suzuki Foundation. While some grizzlies are killed by conservation officers after being deemed 'problem bears' for nearby communities, the vast majority are killed by licensed hunters.

For Trish Boyum, marketing director of B.C. eco-tour company Ocean Adventures, the announcement was a welcome change. Boyum had become an outspoken advocate of grizzly conservation after confronting hunters at the Foch-Gilfttoyees Provincial Park in northern B.C. in 2009. She had been relentlessly writing MLAs and ministers in the years since, urging them to reconsider the grizzly hunt.

"Grizzly bears are the what brings [foreign tourists] to B.C., but when they get here, we encourage them to stay and spend time in the rest of the province," Boyum said. "Our guests come from Surrey, North Vancouver, Alberta and as far away as Great Britain and Germany. They've also written to our government about how much money they spend in B.C. after coming on a (bear-viewing) tour."

"I don't think you'll find many people in the world who are as proud as us of our wildlife," she said.