Leitch, Trost among Tory MPs facing challenge for right to run in 2019 election 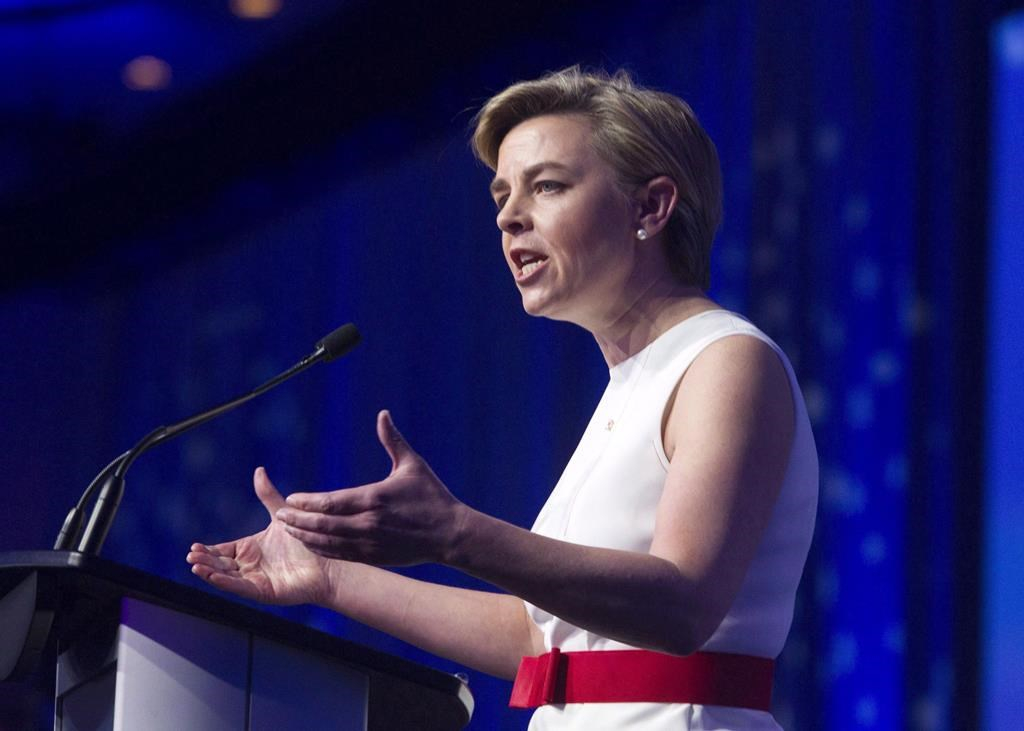 Candidate Kellie Leitch speaks during the opening night of the federal conservative leadership convention in Toronto on Friday, May 26, 2017. Photo by The Canadian Press/Fred Thornhill
Previous story

Three Conservative MPs who sought the party's leadership earlier this year are bracing for a fight to represent the party at all come the 2019 election.

Kellie Leitch, Brad Trost and Deepak Obhrai are among several sitting MPs facing nomination challenges for the next federal vote, but it's expected to be weeks yet before their prospective foes are approved to run against them.

Conservative party headquarters in Ottawa is now reviewing applications from several people seeking to challenge incumbent MPs after the deadline for filing to do so passed Friday.

If the applications are approved, riding associations get to interview and sign-off on prospective candidates and if they get the final nod from the party, elections will be held later in 2018.

Leitch, Trost and Obhrai have all committed to running again.

Leitch finished sixth in the leadership contest, running on a platform that included, among other things, a controversial call for a values test for new Canadians. She's kept a relatively low profile in the House of Commons since and was not included in new leader Andrew Scheer's shadow cabinet.

But she won her Ontario riding by 5,000 votes in the 2015 federal election and said she continues to enjoy the strong support of people there.

The challenge isn't connected to her failed leadership bid, she said.

"Our party has an open nomination process and I agree with it," she said.

"It's part of a healthy process and evidence of a strong party."

At least two people have filed the paperwork to challenge her. One is Gillian Yeates, a Harvard-educated physician, who told a local news outlet last month the riding needed a change.

"I feel strongly there needs to be changes and changes on how we are addressing our public and presenting ourselves as a country," she told Simcoe.com.

"Sometimes there is something that says this is a need and this needs to change and that’s why I am doing it."

The other is Terry Dowdall, mayor of Essa Township, about an hour north of Toronto. In 2010, Dowdall beat out incumbent mayor David Guergis for that job; Guergis's cousin Helena is the former Conservative MP for the riding whose departure from caucus in 2011 after a sting of controversies saw Leitch take over the seat.

Trost finished fourth in the leadership race, buoyed by strong support from social conservatives. He's been an MP since 2004 and won his Saskatchewan riding by about 4,400 votes in 2015.

Trost said it's too soon for him to know whether his leadership campaign put his nomination at risk. He said he's met Brad Redekopp, the local businessman challenging him, and is ready for a fight if the application is accepted.

"I will know for sure in the first week of January if he got everything together and his Is dotted and his Ts crossed."

"I'm preparing as if he has, but he may not have."

Redekopp declined to comment, saying his campaign will issue a statement in the coming days.

Obhrai was the first to drop off the ballot in last May's vote.

He's the longest-serving Conservative MP, but saw his share of the vote in his Calgary riding drop in the 2015 federal election for a victory of about 4,900 votes compared with a landslide of 18,000 in 2011, though the riding boundaries shifted between elections.

In a post to his Facebook page, Obhrai called news of a challenger a "conspiracy," suggesting it was linked to his work travelling on behalf of the party to drum up support during recent by-elections across the country.

"I do not know why this person is challenging me," Obhrai said in a subsequent email.

"This person has been telling people that I am not running in 2019. This person is a former (provincial legislator) from this riding, in 2015. I have always helped him in his election efforts, hence, this is a big surprise."

Other MPs facing challenges include party stalwart Cheryl Gallant in her rural Ontario riding, longtime MP Mike Lake in his Edmonton riding, and relative parliamentary rookie Jim Eglinski in his western Alberta riding — he was elected for the first time in a 2014 by-election.