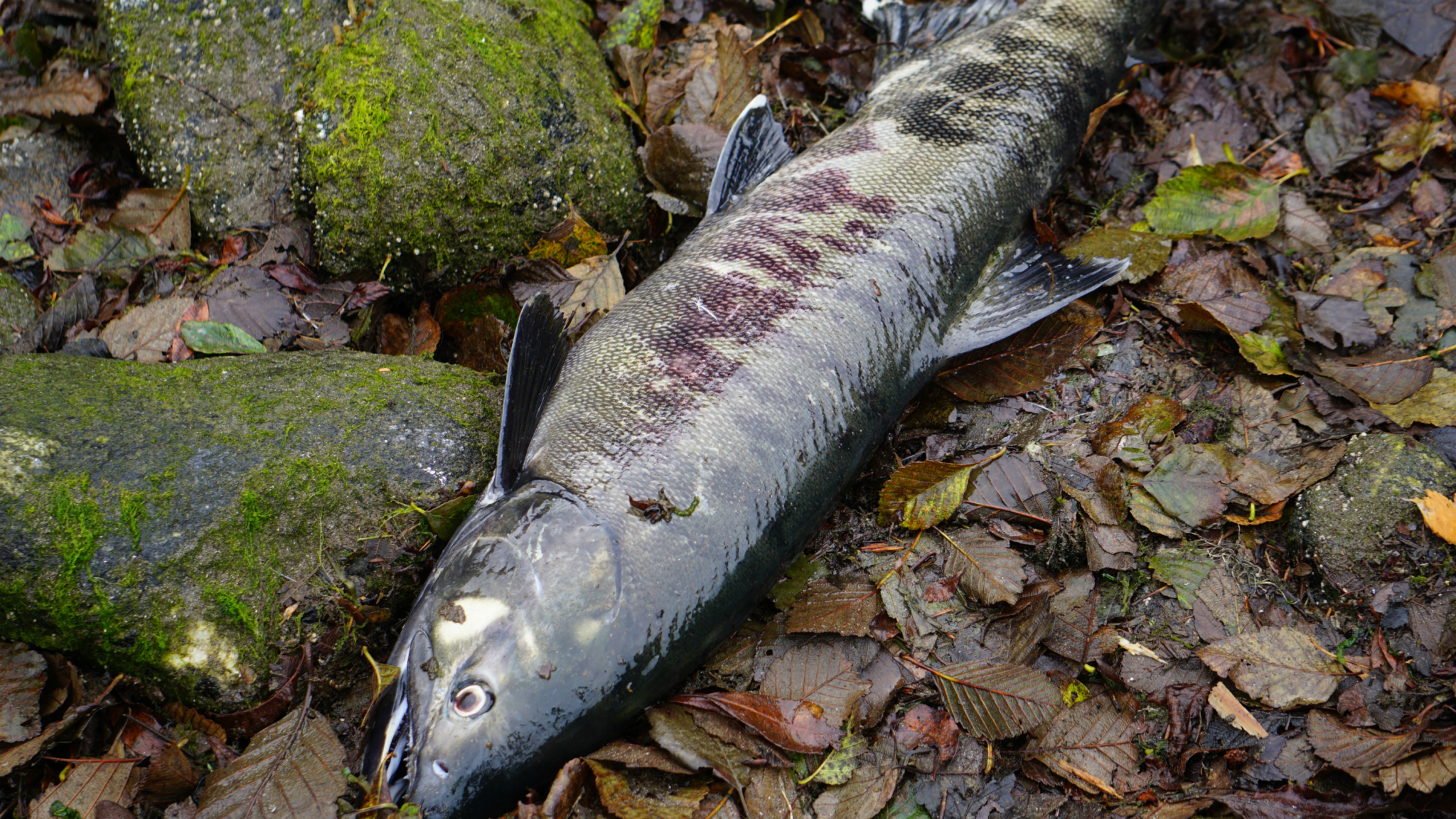 A new report from Fisheries and Oceans Canada has determined that Fraser River sockeye are at minimal risk of catching a particular infectious pathogen from nearby farmed Atlantic populations. File photo by Elizabeth McSheffrey
Previous story
Next story

On Wednesday, Fisheries and Oceans Canada (DFO) published a report concluding that the struggling population, whose annual runs have seen a general decline for the last decade, are unlikely to contract the Infectious Hematopoietic Necrosis Virus (IHNV) from farmed Atlantic salmon populations around B.C.'s Discovery Islands.

The new report comes as B.C. Environment Minister George Heyman said his government is launching a review that will crack down on contaminated discharges into the water from salmon processing plants.

Meantime, the federal department said there are two main factors keeping the risk low of IHNV contraction low for the Fraser River sockeye. It explained this — or at least, tried to explain it— in two scrambled, confusing sentences that described the odds.

First, it said that the likelihood of an IHNV outbreak on Atlantic salmon farms around the Discovery Islands is estimated to be "very unlikely with reasonable certainty," given current fish health management practices, which include an IHNV vaccination with 95-per-cent efficacy.

Second, DFO estimated with "reasonable uncertainty" that it was "extremely unlikely" that young Fraser River sockeye will be infected and diseased from the farms, given that the first two measures limit the amount of potential IHNV that can reach wild waters.

"Based on available evidence, it is concluded that it is extremely unlikely that juvenile Fraser River sockeye salmon will be infected and become diseased due to IHNV released from Atlantic salmon farms," the department's spokeswoman, Carole Saindon, told National Observer in an email. "Reporting uncertainty is a best science practice which characterizes the quality and robustness of the scientific evidence and the variability of the natural system used to reach conclusion for each step of the likelihood assessment."

There was reasonable uncertainty, Saindon added, in the email, as a result of knowledge gaps related to the IHNV concentrations on farms during an outbreak, and the time juvenile sockeye salmon spend around farms. As it stands, it added, all farmed Atlantic salmon are vaccinated against IHNV, which is a native pathogen in Pacific Northwest waters.

IHNV is harmless to humans, but extremely lethal to Atlantic salmon. Infected fish can end up with the acute, systemic disease Infectious Hematopoietic Necrosis (IHN), which attacks the kidneys and spleen of the fish and lead to rotting flesh and organ failure.

It was detected in B.C. fish farms in 2003 and 2012, but DFO confirms that it has not been detected in fish farms since the latest outbreak. The prevalence of INHV outside of farms in spawning adult sockeye salmon is highly variable, said the department, but all Pacific salmon tested for it by the Canadian Food Inspection Agency between 2012 and 2014 in B.C. were negative.

In its Wednesday report on the risk to Fraser River sockeye, the department analyzed several factors: regulatory fishing requirements and fish farm practices on vaccination, rapid detection and euthanization of infected fish; oceanographic process that transport water away from fish farms; the susceptibility of sockeye salmon to IHNV at different stages of life; and the estimated maximum waterborne concentrations of IHNV from net pens and plumes.

For the moment, it said, is has no plans to produce similar reports for other kind of Pacific salmon, including chinook, coho, pink and chum.

"At this point in time, our focus is on conducting risk assessment to address recommendations from the Cohen Commission related to diseases on Atlantic salmon farms in Discovery Islands... Although the risk assessment focused on the risk to Fraser River sockeye salmon, considerations were given to other fish species susceptible to IHN. Pacific salmon species other than sockeye salmon are either not susceptible or are less susceptible and therefore are of a lower likelihood to be at risk."

In 2009, the steady decline of the Fraser River sockeye stirred the federal government to launch the most comprehensive inquiry into Pacific salmon stock management ever conducted. Three years later, the $36-million Cohen Commission produced 75 recommendations to help replenish local salmon runs, one of which included the suspension of new net-pen salmon farming in the Discovery Islands until 2020, to give the sockeye some recovery time.

The B.C. government has honoured that suggestion, but broadly-speaking, Pacific salmon stocks continue to struggle. Exceptionally warm conditions have compromised their diet by bringing smaller, less nutritious plankton into B.C. waters, and created a tougher, hotter swim for spawning adults.

The transfer of infectious diseases from farmed Atlantic salmon living in ocean pens to wild specimens has exacerbated the problem, says B.C. biologist Alexandra Morton. She has taken the federal government to court for allowing the transfer of farmed salmon that have not been tested for piscine reovirus into underwater pens in the wild — a practice she says is illegal under federal fishing regulations.

Piscine reovirus, she told National Observer, is rampant in Pacific salmon and present in 95 per cent of farmed Atlantic salmon that wind up on the shelves in B.C. markets. The virus recently made national news when disturbing footage surfaced of pipes pumping untreated waste — described as 'bloodwater' — that spread it into B.C. waters.

​Morton backed up DFO's assessment on IHNV — over the last few years, she said the federal department has been able to crack down on the disease effectively. Infected, farmed Atlantic salmon are culled by the fish farmers, she explained, and adult sockeye salmon have developed a resistance to the virus.

But she's still not sure what the government meant by its ambiguous phrasing on the reasonably uncertain, extremely unlikely odds of juvenile sockeye infection, she said.

"It's only when things get tipped out balance, like the weather's too warm or the fish are too crowded, that they will get the (INH) disease," said Morton. "I think what that statement is saying, is building (DFO) in some wiggle room. They’re not exactly sure.

"The problem with any kind of feed lot is that any kind of virus, whether it's wild or imported — if you let it build up in numbers it can mutate and challenge the fish at a terribly high level."

Morton encouraged the federal government to remove all diseased fish from B.C. waters, including those with piscine reovirus, which is linked to the development of fatal heart and skeletal muscle inflammation (HSMI).

Meantime, the B.C. government — spurred by outrage over the bloodwater video — has announced a review of wastewater discharge and pest management practices, in order to ensure that no more contaminants flow into wild water, and that treatment for sea lice infecting salmon is on par with global best practices.

"We’re going to systemically inspect the fish processing operations up and down the coast and ensure people are working to the kind of standards that British Columbians expect and world leading standards ghat we find in jurisdictions like Norway," Heyman, the B.C. environment minister, told National Observer on Wednesday.

"We have new science, modern science, we have new public expectations and the expectation is simple: people want to be assured that people operating near the ocean aren’t discharging contaminated or otherwise infected discharge into the marine environment and threatening wild salmon."

Lack of care under BC Liberals

Following the release of the bloodwater video, Heyman said the B.C. government sent inspectors to fish farms in Tofino and Campbell River to take samples and test them for piscine reovirus. It became clear at that time, he added, just how little attention had been paid to the risks posed by net-pen fish farms to wild salmon under the previous government.

"...In the course of the investigation, we realized that inspections have been few and far between for the (past) 16 years under the BC Liberals," he said in an interview. "One of the plants, they were last inspected four years ago and they were out of compliance then. Orders were written, but no one followed up. We’re short of staff on the ground, and we also became aware that the permits themselves in some cases were 30 years old."

The 2012 Cohen Commission made eight recommendations directly to the B.C. government, which has jurisdiction over the farms and their permits, but not the oceans, which are managed federally. The BC Liberals, in power at the time, “accepted the intent” of most of those measures, but did not commit to implementing them.

It did, however, commit to working with the federal government to become 90 per cent compliant with Riparian Areas Regulation, and not to issue any new tenure agreements for net-pen salmon farms in the Discovery Islands until 2020.

As it stands, B.C.'s waste discharge regulation allows discharges from fish processing plants into the marine environment, with a total of 35 discharge authorizations issued. Heyman would not comment on whether he thought the province's fish farmers were complying with provincial regulations, since the NDP government has not yet inspected them "directly."

But he said his ministry will work with First Nations and stakeholders to look at the practices they're using and draft new regulations in the New Year.

"If we think they need to be improved, we’ll work with them to ensure they’re improved. If they’re out of compliance with their permits we’ll deal with that," he said. "If we think the conditions need to be strengthened, and I think they probably do, we’re going to work with them to make sure they understand the new conditions of their permits and that they work towards meeting those in every way they can."

He would not comment on the federal report on Fraser sockeye and IHNV, since it falls outside B.C.'s jurisdiction.

1. Maybe there should be no

1. Maybe there should be no comma after "added" since it makes it seem like the uncertainly is in the email. "...There was reasonable uncertainty, Saindon added, in the email, as a result of..."

2. I don't see anything about the policy of "err on the side of caution, all other things considered, in cases where risk is not clearly known" (my wording). It should at least be implemented in the policy, or lack thereof, that results from this assessment.