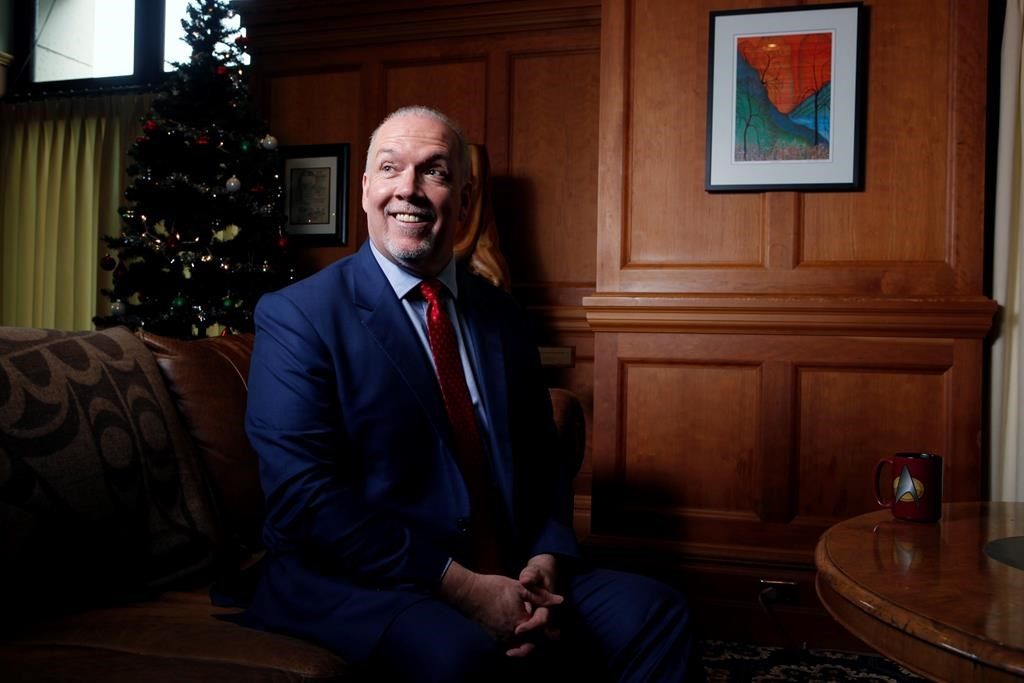 Premier John Horgan poses for a portrait following a year end interview at his office at Legislature in Victoria, B.C., on Tuesday, December 12, 2017. File photo by The Canadian Press/Chad Hipolito
Previous story

A pact with the Green party that allowed the NDP to form a minority government in British Columbia is a working example of electoral reform ahead of a referendum on the issue next year, Premier John Horgan says.

There have been a few bumps in the agreement between the New Democrats and Greens since last May's tumultuous provincial election, but Horgan said in a year-end interview the disagreements are just further proof that such an electoral model can work.

The government passed legislation setting the stage for a provincial referendum by Nov. 30, 2018, that will ask residents if they support changing the voting system to a form of proportional representation in time for the next election in 2021.

The mail-in vote would require a 50 per cent plus one margin of support to be successful.

"If a minority government can continue to demonstrate results for people, they'll (voters) look at proportional representation with a different view," Horgan said. "They'll say, 'Maybe this is a good thing. Horgan has to get up everyday and work with people.' "

While the Greens were angry about the NDP decisions to move ahead on Site C and its slow approach to ride sharing by ordering a review, they voted with the government to pass legislation to ban corporate and union donations to political parties, reform the registration of lobbyists and close a loophole in the Residential Tenacy Act to protect renters.

Horgan said B.C.'s electoral system is not fair, with only one party in the past five elections forming government after receiving more than 50 per cent of the vote.

The Opposition Liberals formed government briefly after the election and proposed an electoral reform referendum in its throne speech last June, only to vote against the referendum legislation proposed by the NDP.

The Liberals said the New Democrats, with the support of the Greens, are formulating a referendum that ensures the results are slanted towards proportional representation.

"This is a deliberate and cynical attempt by the NDP and the Green party to manipulate a specific result that will allow them to cling to power," Liberal Andrew Wilkinson said in a statement.

Green Leader Andrew Weaver said it's the Liberal members who want to preserve the first-past-the-post system despite surveys that indicate 70 per cent of B.C. voters favour change.

B.C. voters turned down two previous referendums on electoral reform in 2005 and 2009.

Horgan said the referendum will likely be B.C.'s last if it's rejected.

"I think we will have exhausted the public's interest in this issue," Horgan said.

Horgan said the referendum will be a major political topic next year, but housing will dominate February's budget.