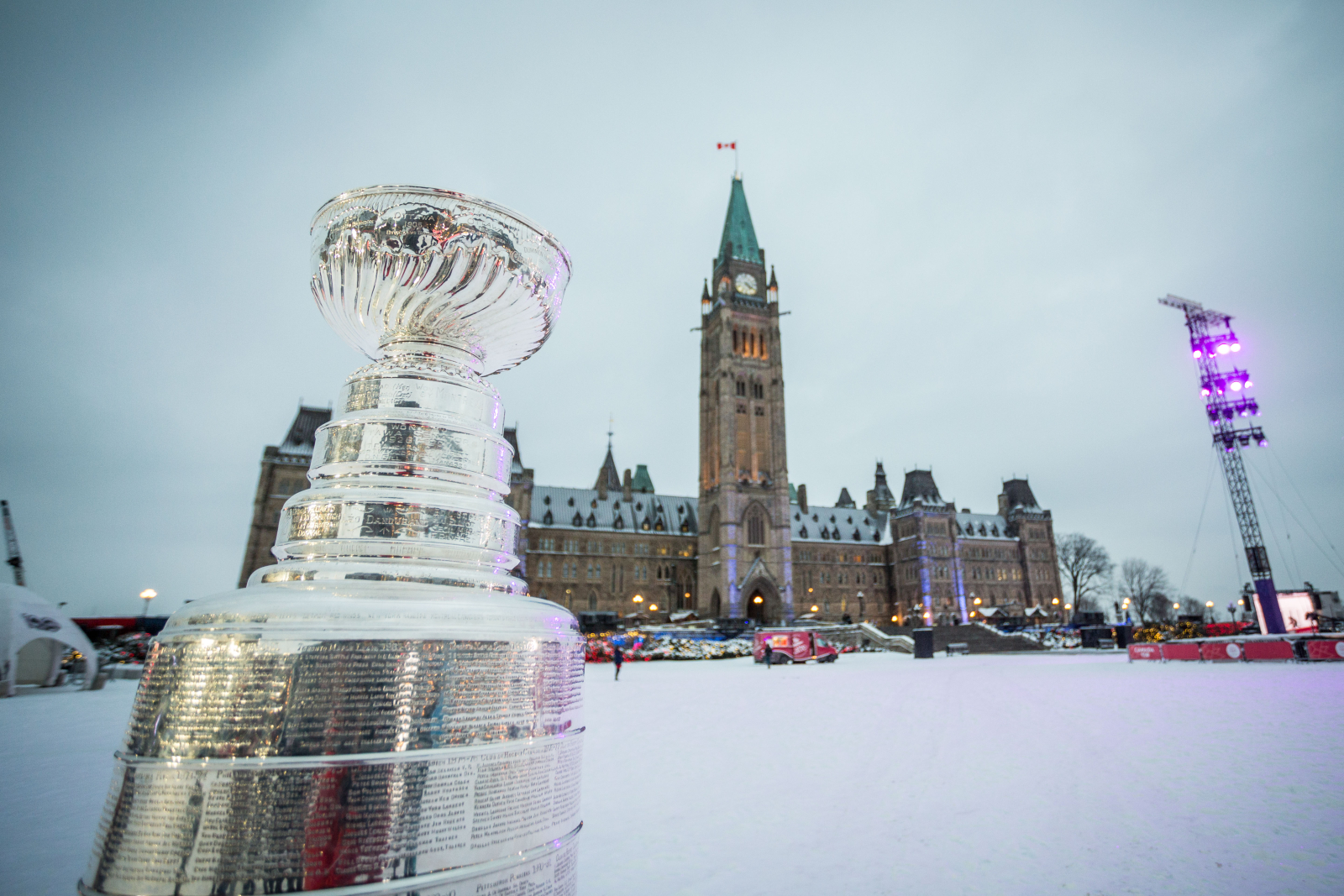 The Stanley Cup makes an appearance on Parliament Hill on Dec. 15, 2017. Photo by Alex Tétreault
Previous story
Next story

Mother Nature drowned out Canada Day on Parliament Hill and now she might freeze out New Year's Eve.

Organizers were checking the forecast every hour Friday hoping to see some improvement but the polar vortex that has turned Ottawa into a living icicle shows no sign of lifting until at least January 2.

So they've cancelled plans for musical entertainment and DJs for the Canada 150 closing events, but will go ahead with fireworks and a laser show scheduled for midnight.

Heritage Minister Melanie Joly said while Canadians were able to manage all the snow that fell around last New Year's Eve to ring in Canada 150, this year the cold was proving to be too much.

"Of course it's a bit of a disappointment with this extreme cold weather but we have to deal with it and making sure that Canadians are safe and everything is well taken care of in terms of public health we decided to modify the celebrations," Joly said in an interview.

In a statement Friday, her department asked people to "consider the extreme weather conditions and prepare accordingly to prevent frostbite and other injuries."

Earlier Friday, plans for the bash were in doubt altogether as the department's website briefly listed everything as being cancelled, but a final decision wasn't made until mid-morning.

Andrew Campbell, the senior executive director in charge of the Canada 150 secretariat, had said earlier Friday with the current forecast offering up temperatures close to -28 Celsius with 15 km/hour winds, there had been concern that the equipment needed for the fireworks and multimedia light show might not work.

Hip hop artist Kardinal Offishall is among the artists scheduled to perform on Parliament Hill Sunday night. News on social media that the party might be cancelled prompted him to post his displeasure.

Campbell said it will be disappointing if things end up being cancelled but there is still lots going on for New Year's Eve.

He pointed to Nimidiwin, a showcase of Indigenous culture being put on at the Canadian Museum of History on Sunday afternoon, and the official lighting of the National Arts Centre's new Kipnes Lantern, which is the showpiece of its $110.5 million makeover.

The City of Ottawa has already moved all its events indoors including a session of Parka Yoga and a concert.

Organizers of a New Year's Eve party in Toronto's Nathan Phillips Square scaled back their plans too, bumping the party ahead to just before midnight with a countdown and fireworks display. The event was previously scheduled to begin at 8 p.m. and include live music and dance performances.

Toronto officials say they will continue to monitor weather conditions ahead of the celebration and will make more adjustments if necessary.

In Montreal, a huge New Year's Eve party to cap the city's 375th-birthday celebrations will go ahead as planned but organizers are expecting attendance to drop because of cold-weather warnings. The weather there is forecast to be -26 Celsius.

More staff also had to be hired, said Martin Durocher, the co-founder of Montréal en Fêtes.

"Everything that usually takes one day to do is taking two days because people have to go inside so often to warm up, so that's why we've doubled the number of people working on the party," Durocher said.

In Quebec City, where it's forecast to be -15 Celsius, Andre Verreault of Action Promotion Grande Allée said residents are accustomed to the cold.

"This is Quebec City. It's a winter city. We have lots of beautiful white snow. It's cold but with gorgeous sunshine. We're not cancelling anything," Verreault said, noting 50,000 turned out in 2013 when it was -38 Celsius.

Organizers on the Prairies scoffed a bit at the notion cold could detail their plans.

In Calgary, where temperatures are expected to hover at the -30 Celsius mark on Sunday, celebrations will once again be held in and around the downtown Olympic Plaza.

A number of bands are scheduled to play outdoors prior to the midnight fireworks.

The cold in Ottawa versus the cold in Alberta is different, said Teresa Byrne, arts and culture superintendent of festivals and events for the City of Calgary.

"...So it's harder to compare when Ottawa might pull the plug versus when Calgary or Edmonton would pull the plug."

Since the temperature tends to drop as the night wears on, Edmonton scheduled fireworks there early — for 9 p.m.

Officials are prepared to modify the schedule for outdoor events, should the temperature become too extreme. Fireworks would only be scrubbed if the wind speed reached 40 km/h which, for safety reasons, makes them unsafe to set off.

"We've had cold temperatures on New Year's Eve before and we've still had large crowds come out, so we're expecting something similar this year."

— with files from Ken Trimble in Edmonton, Paola Loriggio in Toronto, Roxanne Ocampo Picard in Montreal.

Hell freezes over: A photo essay of hockey on a bone-chilling Ottawa night

Bono and friends just warmed the hearts of soggy Canadians