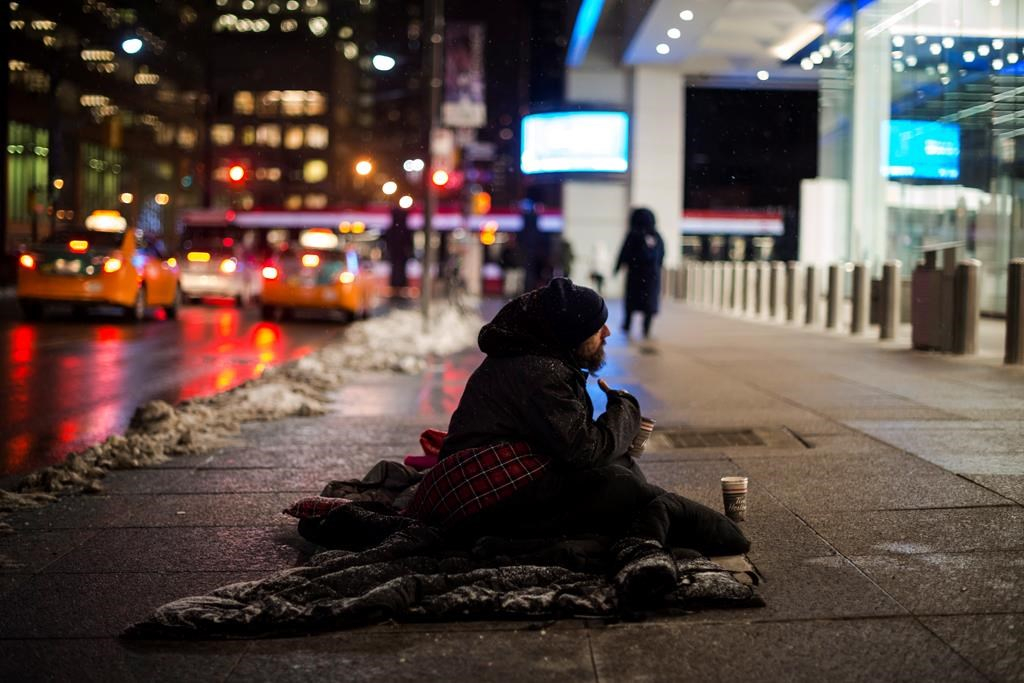 A homeless person is seen in downtown Toronto, on Wednesday, January 3, 2018. Photo by The Canadian Press/Christopher Katsarov
Previous story

Goodale says options are being evaluated to find the most effective solution as quickly as possible following a request from Toronto's mayor to open a federal armoury to shelter the homeless.

Environment Canada has issued a new extreme cold warning advisory for the city, predicting overnight temperatures of as low as -25 C with wind chill values that could make it feel like -40 C.

After nearly two weeks of similar conditions, Tory bowed to public pressure to seek permission to open the Moss Park Armoury, which is owned by the federal government.

Tory says the city is asking Ottawa and the provincial government to determine whether the armoury would be suitable as a 24-hour winter respite centre that could remain open until April 15.

To cope with Thursday's imminent cold snap, however, Tory says Toronto has opted to open two additional short-term warming centres downtown that will be available to residents for the duration of the cold weather warning, which is set to extend into the weekend.

Tory said the city will also be dispatching additional teams of outreach workers and deploying other staff to help with the expected influx of people tapping into the shelter system, which has come under unusual strain in recent weeks.

Tory said the prolonged spell of cold weather, combined with an influx of refugees over the past two years and a city-wide mental health crisis, has seen demand on the system soar 30 per cent from where it was at this time last year.

The proposal to open the Moss Park Armoury, which was rejected by city council last month, gained fresh life as temperatures plummeted and led to Tory's promise to reach out to higher orders of government to discuss the idea.

"I want to say those discussions have been going very well, have been very constructive," he said Thursday, adding that he expects a resolution will be finalized soon.

Ontario Premier Kathleen Wynne said the government is working closely with Toronto and has reached out to other municipalities due to be affected by the frigid weather.

She said protecting homeless residents from the harsh conditions is a high priority.

"It's going to be very cold tonight," she said. "Our immediate concern is that we work as quickly as possible with the city to make sure that there is space for anybody who needs a warm place tonight."

The city's ability to address the needs of the homeless is now the subject of two inquiries following confusion over the availability of spaces during the prolonged cold snap.

Advocates have said in recent days that they tried to find spots for homeless people only to be told that they were completely full. The city has said there are still beds available and blamed miscommunication for the confusion.

Calling the miscommunication "indefensible," Tory previously said he welcomes the inquiries recently announced by the city's general manager of shelter support as well as Toronto's ombudsman.

The latest data from the city indicates Toronto's shelters operated at between 94 and 95 per cent capacity on the weekend with 5,460 people staying in the shelter system on Jan. 1. Another 445 people used winter respite centres.

- With files from Shawn Jeffords