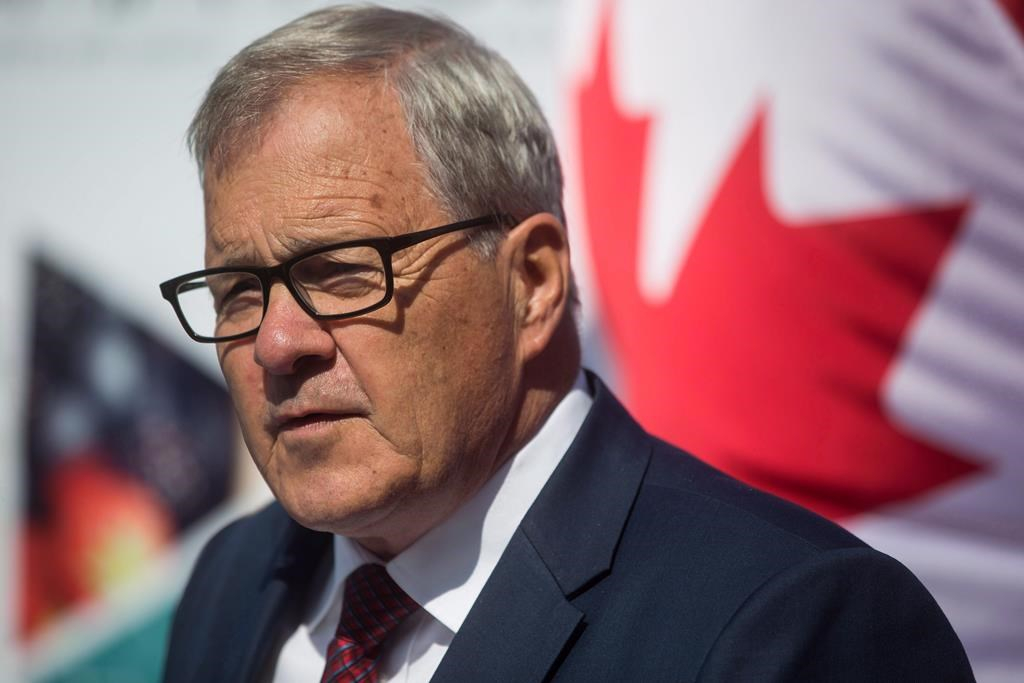 Federal cabinet ministers have fanned out south of the border in hope of energizing U.S. supporters of the beleaguered NAFTA deal as yet another critical round of talks is set to begin in Montreal later this month.

In this latest effort to sing NAFTA's praises to the Americans, the stakes appear highest for Agriculture Minister Lawrence MacAulay.

On Sunday, MacAulay will deliver Ottawa's message from a big stage in Nashville, where he will become the first Canadian cabinet minister to deliver a keynote address at the annual convention of the American Farm Bureau Federation. The conference is a huge gathering of more than 5,000 delegates from across the U.S. agricultural industry.

MacAulay's speech comes at a crucial time for the future of the deal, which he says has had big impact on the continent's farming sectors.

But the significance of his address will be even greater given the higher-profile event on the convention calendar expected in the days after his appearance — a speech by U.S. President Donald Trump.

Trump, who will become the first American president to address the convention since George H. W. Bush in 1992, has repeatedly threatened to begin withdrawing the U.S. from the agreement.

"It's without a question a big deal," MacAulay told The Canadian Press in an interview when asked about speaking before Trump at the same convention.

"This is very important, this meeting, in my opinion, and I'm very pleased to be there and hopefully it works well."

Fortunately for MacAulay, the U.S. farming lobby has been a leader in opposing the push to abandon NAFTA, which means his pro-trade message is likely to get a warmer reception than that of his presidential counterpart.

In his address, MacAulay is expected to remind the crowd how about 80 food and agriculture organizations sent a warning to the U.S. administration that pulling out of NAFTA would immediately hurt their industries and kills tens of thousands of jobs.

MacAulay, Environment Minister Catherine McKenna and Public Safety Minister Ralph Goodale have all been meeting political and business leaders in the U.S. this week to promote NAFTA's benefits.

Their visits come ahead of the next round of bargaining, which starts Jan. 23 when negotiators from Canada, the U.S. and Mexico reconvene in Montreal.

Goodale met with strong pro-NAFTA officials in Kentucky, including Gov. Matt Bevin and the leaders of the state's chamber of commerce.

In prepared remarks for his speech Friday, he stressed the importance of identifying and dealing properly with any genuine unfairness in the deal, rather than "tanking the whole relationship."

Canada's message hasn't changed as it renews its defence of the trade deal, said McKenna, who continues to repeat the mantra that NAFTA is key to tackling environmental challenges and boosting economic growth in all three countries.

"I think what we're doing is just looking at all the opportunities to make the case for why NAFTA is really important," McKenna said.

One U.S.-based trade expert said the "maple charm offensive" by Canadian political leaders over the past year has been effective at providing outside support to pro-NAFTA supporters in the U.S. Congress.

But Dan Ujczo, a lawyer for Dickinson Wright in Columbus, Ohio, doesn't think the needle has moved much for those opposed to or even undecided on the deal.

"I don't think hearts and minds have been changed," said Ujczo, who wants Canada to deploy a fresh set of messengers — and messages.

It's time to go beyond touting NAFTA's benefits and start acknowledging that there have been some losers in North American integration, Ujczo said — and explain how best to help those people.

Canadian businesses should also be playing a bigger role in the U.S. outreach effort, he added.

January is likely to be a critical month for NAFTA, since it includes another round of potentially substantive negotiations as well as Trump's latest State of the Union address.

Until then, Trump's NAFTA message Monday will be "an important measuring stick" on how the administration plans to proceed, he said.

"While I don't expect the president to make any promises about not withdrawing from NAFTA, I think his comments will add some clarity as to how effective the farm lobby's advocacy has been."