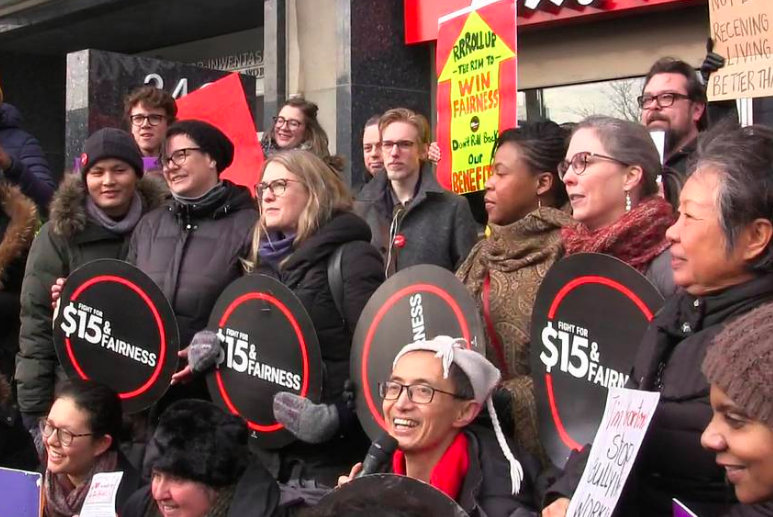 In both processes, the planned increases have generated significant public debate, including the predictable circulation of exaggerated claims about the supposed harmful effects of minimum wage increases and stereotypes of who will benefit. I’d like to use recent economic research on minimum wage hikes to debunk five of the most common claims, using examples from several Canadian provinces.

Earlier this week, Tristin Hopper wrote in the National Post that “Ontario’s minimum wage will rise 29 per cent (from $11.60 to $15) within the span of a year. Not only is the province raising the minimum wage to a level that is proportionally higher than anything known before, but it is doing it within an incredibly short timeline.”

Jack Mintz, a University of Calgary economics professor and a director of Imperial Oil, recently claimed that “Economists generally agree that minimum (wage increases) cause job losses, even if the impact may not be significant in some cases.”

That would be true if Mintz was referring to what many economists believed decades ago. This article, whose authors include two former presidents of the Canadian Economics Association, does a good job of explaining that, “For over 20 years now, many highly credible studies have found that the disemployment effects of higher minimum wages are generally very close to zero.”

Here’s a recent letter that 53 economists signed as an endorsement of a $15 minimum wage in Ontario.

In advance of B.C.’s 2011-12 minimum wage increase, the right-wing Fraser Institute published a report warning that the 28 per cent wage hike “could lead to over 52,000 job losses,” equivalent to a 16 per cent decline in employment for young workers under 25. That didn’t happen. University of British Columbia economics professor David Green examined this case and found that the employment rate for workers under 25 declined by 1.6 per cent between 2010 and 2013. That’s a mere one-tenth of the Fraser Institute prediction.

In 2009, Hristos Doucouliagos and T.D. Stanley published a meta-study of 64 U.S. minimum wage studies published between 1972 and 2007. The researchers took the almost 1,500 employment estimates in these studies, weighted the estimates by their statistical precision and “found that the most precise estimates were heavily clustered at or near zero employment effects.”

Mintz makes the bold claim that Ontario’s wage hike will not only hurt minimum wage workers, it will hurt all workers because consumer prices may go up a bit. He seems to believe that if the price of a Tim Hortons coffee goes up 5 or 10 cents as a result of the minimum wage hike, then it isn’t worth putting billions of dollars of additional wages into the hands of the 1.2 million people making minimum wage in Ontario.

The National Post’s Tristin Hopper writes that “a $15 minimum wage is unlikely to come without costs. The likely forecast is that some Canadians will get a pay raise, others will get a layoff notice and still others will simply never get hired.” As evidence, he cites recent reports from Ontario’s Fiscal Accountability Office, TD Bank, and the Bank of Canada.

Economist Michal Rozworski has criticized the skewed media coverage of these three reports and some of the assumptions made in the reports themselves (here, here, and here). In short, Rozworski shows that the media coverage highlighted predictions that the minimum wage increase would result in slower job growth (not necessarily losses of existing jobs), but the media failed to mention that the Bank of Canada and Ontario’s Fiscal Accountability Office both conclude that the minimum wage hike will result in net gains for workers. Rozworski writes, “the Bank (of Canada) found that the costs of projected lower employment are outweighed by the benefits from higher economy-wide wage income stemming directly from the minimum wage increase.”

The quote above is from Hopper. He continues, “The ideal outcome to a minimum wage hike would be if business owners simply became more prosperous and shared the bounty with their workers. But if there’s one constant among minimum wage studies, it’s that having higher-paid employees generally doesn’t prompt more customers to walk in.”

Recent economic research comes to the opposite conclusion: a minimum wage increase is in effect a stimulus to the local economy because low-income earners spend most of their income, and chiefly spend it right in their community. Raising the minimum wage increases overall consumer spending power and the amount of money circulating in the economy. Research published in September, 2017 by ATB Financial, an Alberta-based bank, shows that restaurant and bar receipts in Alberta are at an all-time high.

Lars Osberg, a Dalhousie University economics professor and a former president of the Canadian Economics Association, and his colleagues assert, “Seven … Nobel Prize winners endorse a 40-per-cent increase in the U.S. minimum wage and a former editor of The Economist, the world’s most influential free-market voice, recently called for big minimum-wage hikes to help boost lackluster purchasing power across the industrialized world.”

Mintz writes, “if someone with little education is getting $15 per hour plus some benefits, why would workers bother putting in the time and effort to get a better-skilled apprenticeship? Meanwhile, the workers who will be increasingly shut out of minimum-wage jobs will be those who bring the lowest skill value, including youths and immigrants.”

Beyond the dubious claims about immigrants' low skill value, many low-wage workers have actually earned post-secondary education. In Saskatchewan, 33 per cent of workers making $15 an hour or less are post-secondary graduates, and in Alberta the figure is 36 per cent.

Gains for workers and local economies

Business as usual hasn’t been working. Past minimum wage increases had no significant impacts on poverty rates because they were too small, keeping full-time minimum wage earnings below the poverty line. It’s time for bold increases, and the governments of Alberta and of Ontario are showing leadership in this regard.

Cuts and privatization aren’t the answer for Alberta

Thank you. The mean spirited

Thank you. The mean spirited certainties of the right, often broadcast without genuine research, are more than tiresome. They miss what for me is the essential point. A business that can't survive unless it pays slave wages, likely shouldn't survive. Far from good wages hurting the economy, they will help it to thrive.

Time to get rid of these pseudo capitalists who haven't even bothered to master key concepts like the laws of supply and demand, or spent any time studying the deleterious effects on the economy of extreme poverty.

Thanks Ian and the Parkland

Thanks Ian and the Parkland Institute for their analysis here. Everyone should keep in mind the funders of the people who are opposed to the minimum wage. Jack Mintz is a former oilman and director of the C.D. Howe Institute who always complains about taxation and prefers deregulation and privatization. What people don't understand about the School for Public Policy for which he is the director, is that it publishes a lot of these studies all of the time under the guise of being a a real school for public policy analysis. At least with the Fraser and C.D. Howe Institutes, we know how their backers are and what they want, with the School there is the facade of being a respectable faculty in a respectable university. People need to be aware of this fact when reading these arguments in the mainstream media.