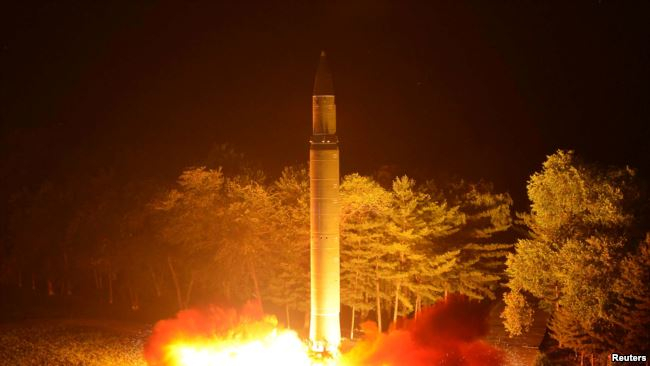 In 2004, Kim Jong-Il wanted to convince the United States that it had a nuclear bomb.

It was “an effort to to convince me that Pyongyang had a nuclear deterrent,” Hecker recalled. In November 2017, “to make the same point… Pyongyang lofted a missile 2,800 miles into space.”

Despite eight rounds of United Nations Security Council sanctions since 2006, the North Koreans have increasingly been more successful testing missiles with greater range and explosive power. In 2009, they launched a missile into space, ostensibly for peaceful purposes. In 2015, the North Koreans successfully tested their first short-range ballistic missile from a submarine.

Last year, North Korea continued their tests well into the winter, a sign that more resources have been diverted to the missile program. To finance these operations, North Korea’s illicit trade networks have taken a central role in supporting the North Korean economy.

“What’s most indicative of the shift is the huge role of foreign currency and dollarization of the economy,” said David Thompson, a senior analyst at C4ADS, a Washington-based think tank. “Largely, the North Korean won is not the primary means of storing wealth, and in some places, it’s not even the way people conduct business.”

The lifelines keeping the North Korean economy afloat are also susceptible to outside pressure. According to C4ADS’s research, only around 5,000 Chinese companies traded with North Korea between 2013 and 2016-- compared to over 65,000 trading with South Korea. These overseas “gateway firms” give the regime valuable access to the international financial system.

Kim Jong's staff invited some of the world’s top nuclear scientists into his facility and handed Siegfried Hecker, a professor at Stanford University, a small piece of plutonium metal inside a glass jar.

“You’re going to see a little lag time on sanctions targeting revenue-generating activity; what’s important is that the measures being put in place should really create financial leverage targeting the regime,” Thompson said. “At this point, making sanctions effective is all about enforcement.”

At the Foreign Ministers’ Meeting on Korea, U.S. Secretary of State Rex Tillerson demanded that North Korea “irreversibly denuclearize” and threatened more sanctions if they did not comply.

“The great goal of the pressure campaign is to cut off the sources of funding that [North Korea] uses to fund its illegal nuclear and ballistic missile programs,” Tillerson said. “We cannot accept you as a nuclear state.”