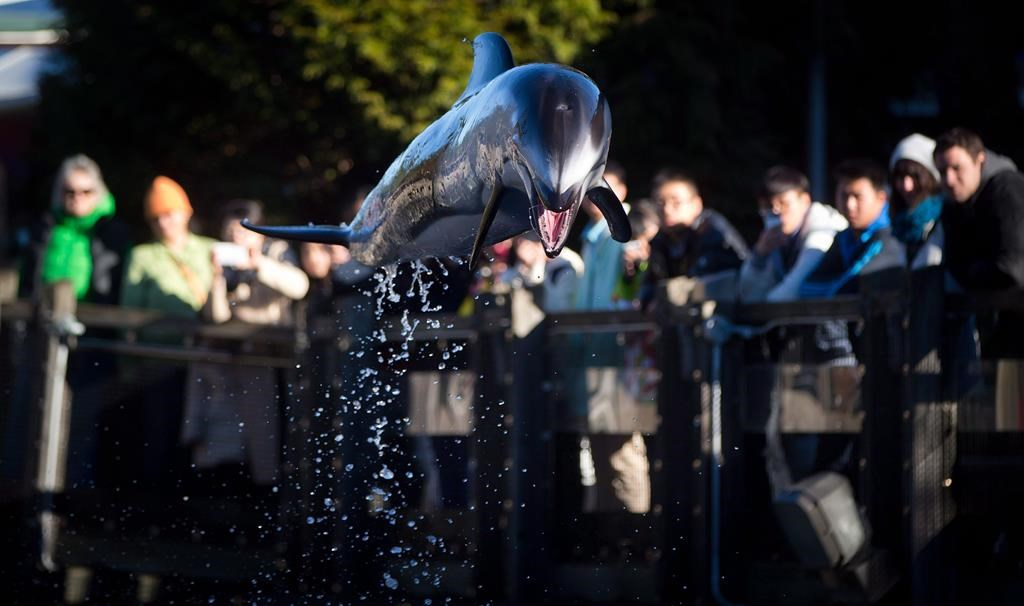 A porpoise leaps through the air during a show at the Vancouver Aquarium in British Columbia in 2017. The aquarium announced Thursday it will no longer keep cetaceans, including dolphins, in captivity. File photo by The Canadian Press
Previous story

Animal advocates across Canada are celebrating victory this week as the Vancouver Aquarium confirms that it will no longer display whales or dolphins on its premises.

The news comes nearly a year after a local bylaw banned them from adding new cetaceans to its collection.

The popular sanctuary, conservation and research centre announced what it described as a "difficult decision" on Thursday, in an online statement. The aquarium's mission will now focus on raising awareness of issues that impact the ocean and its critters, large and small.

"The ongoing discussions about whales and dolphins in our care have been a distraction from real threats to the ocean and have sidelined the critical work we lead," wrote aquarium CEO John Nightingale. "We aim to inspire people in every corner of the planet to participate in creating healthy oceans, and it's time to get on with it."

A message from CEO Dr. Nightingale about the future of Vancouver Aquarium. https://t.co/S3mQvHFO4b pic.twitter.com/NyYxg8QSXK

Exceptions for Helen and animal rescues

The Vancouver Aquarium, located in the heart of Vancouver's iconic Stanley Park, will make an exception for its single remaining cetacean, a Pacific white-sided dolphin named Helen, and the temporary accommodation of any rescued cetaceans. According to Nightingale's statement, Helen is a senior dolphin — likely in her 30s — and would not do well in the wild.

"She arrived at the Aquarium in 2005 after her rescue and rehabilitation from entanglement in a fishing net in Japan," he explained. "After many years in professional care and with only partial flippers, Helen is not a candidate for release."

"Today's announcement is a tremendous victory for the thousands of compassionate citizens who stood up against the cruel practice of keeping smart, sentient whales and dolphins imprisoned in tiny tanks," said @CamilleLabchuk

The aquarium's porpoise, Daisy, died on the premises in June 2017, while its young false killer whale, Chester, died in November last year.

The 'writing is on the wall'

Camille Labchuk, executive director of Animal Justice, applauded the aquarium's decision, but said it comes "extremely late in the game."

"Today's announcement is a tremendous victory for the thousands of compassionate citizens who stood up against the cruel practice of keeping smart, sentient whales and dolphins imprisoned in tiny tanks," she said in a press statement.

"For decades, the Aquarium has fought tooth and nail against attempts to restrict or prohibit whale and dolphin captivity at its facility. The Aquarium is now backing down from this fight, but only after years of being the target of protests, being embroiled in lawsuits, and hit with a ban on cetacean captivity imposed by Vancouver's park board. The writing is on the wall for the whale and dolphin captivity industry."

According to Animal Justice, the aquarium is still suing the Vancouver Park Board in an attempt to overturn the anti-captivity bylaw. The national animal law charity intervened in that case, and says a judge will issue a ruling shortly.

A bill currently moving through the Senate, Labchuk added, would impose a nation-wide ban on keeping whales and dolphins in captivity and should be voted on later this month.

— with files from Sandy Garossino

John Nightingale, dragged this on for so long, shame on him. But.... am very happy that the aquarium is doing the right thing. I first met Skana in 1968 when I was 7 years old. I have a vivid memory of feeling horrible for the poor Orca and could not believe how small the tiny pool was. I have been horrified ever since. No one had to teach me this empathy, I knew at 7 years old that this was wrong. Thanks to all the strong and determined people who have all come together the world over against such inhumane treatment of these intelligent animals. Huge relief being felt all over.