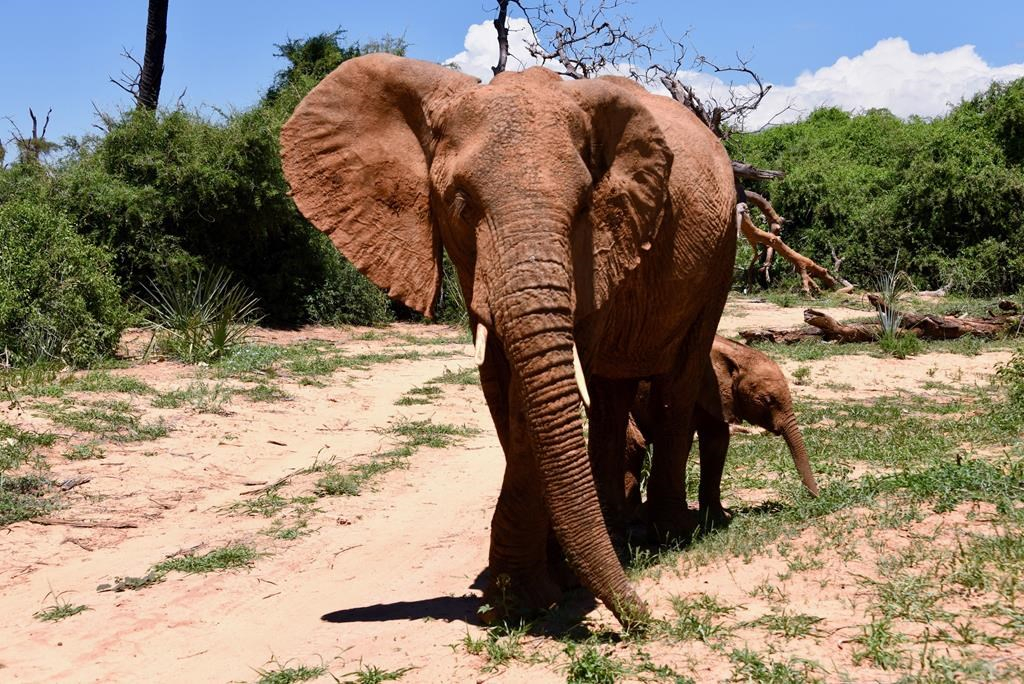 Sophie the elephant, named after Sophie Grégorie Trudeau, and her baby are shown in Kenya in a handout photo. Handout photo by Mark Starowicz
Previous story
Next story

Sophie Grégoire Trudeau is hanging out with some heavy hitters these days — names like Michelle Obama and Martha Washington. She eats fruit and tree bark, and spends her time caring for her nine-month-old son. She does not, however, do yoga.

Nor — as by now you may have guessed — is she the wife of Prime Minister Justin Trudeau.

Rather, she's an elephant, living on the Samburu National Reserve in Kenya, who was granted her politically prominent moniker after giving birth to her first calf — part of a tradition by the organization Save the Elephants to bestow names on female elephants in the park reserve after they become mothers.

George Wittemyer, chair of the scientific board of Save The Elephants, said the animals are named in themes based on their family units; Sophie is part of the "first lady" herd. Her mother is Rosalynn Carter, named for Jimmy Carter's wife. She has cousins named after Michelle Obama and Mary Todd Lincoln. Martha Washington is the matriarch of the entire group.

She is also the first elephant in the herd to be named after the wife of a Canadian prime minister.

That decision came about last May, shortly after she had her calf, because a crew with CBC's "The Nature of Things" happened to be in Kenya filming a documentary on the matriarchal behaviour of animals such as elephants, lions and baboons.

With Canadians on the ground at the time, Sophie Grégoire Trudeau seemed an obvious choice, Wittemyer said. The documentary airs this weekend.

Wittemyer is hoping that any attention the elephants might generate will help drive home the fact that they continue to face a serious risk of extinction.

"This is an incredible species," he said. "We're sharing the planet with it and we need to figure out how to do so and taking its teeth and putting it on your mantle is not acceptable."

The ivory trade resulted in the loss of half the African elephant population in the 1980s, leading the United Nations to ban international ivory sales in 1990. While the impact was immediately positive, several countries worked to lift the ban for ivory from their lands, and other countries continued domestic trading in ivory, including Canada.

Canada will not ban it because of the ivory market for narwhal and walrus tusks sold by the Inuit. However, it can be difficult to tell the difference between elephant ivory and ivory from other animals, making it easy to slip illegal products into legitimate trade. The black market has continued; the world's elephant population declined another 62 per cent between 2002 and 2012, largely due to poaching.

Still, poaching continues. Reports say 24 elephants were killed in Mozambique in one week in late December and trade in ivory is growing in other parts of the world to offset the impact of China's ban.

Sophie Grégoire Trudeau — the human version — was made aware of her elephant namesake last year. She was unavailable for an interview and had no comment.

By The Canadian Press | News, Politics | January 8th 2018
State Of The Animal

By Associated Press | News, US News, Politics | July 3rd 2017
State Of The Animal