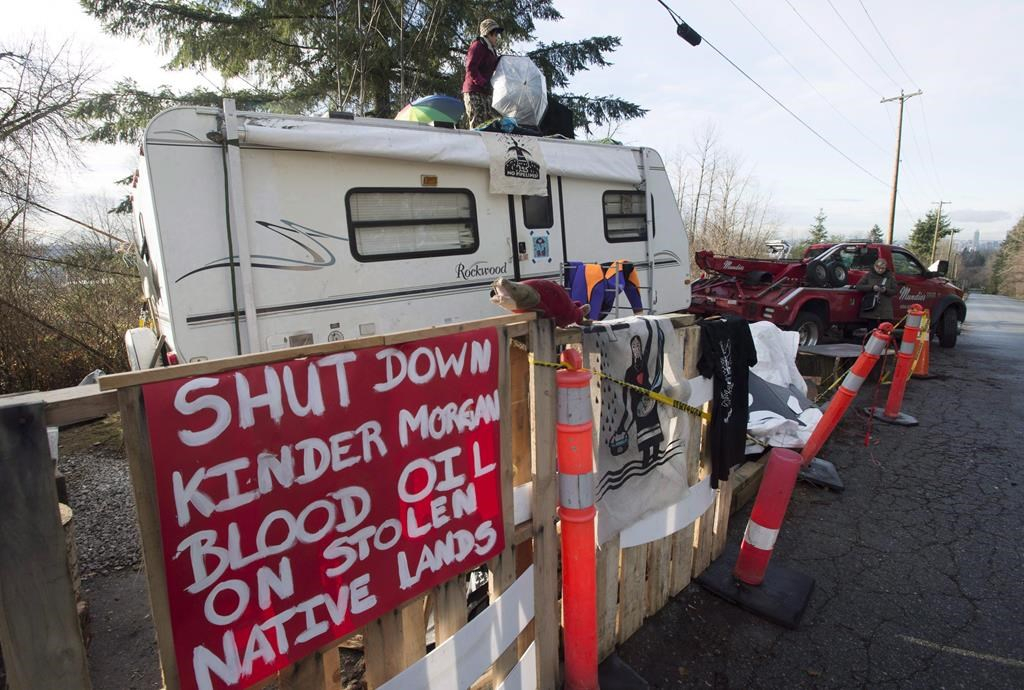 A protester who goes by the name Uni stands on top of a trailer outside the main gates of Kinder Morgan in Burnaby, B.C., on Wednesday, Jan. 10, 2018. File photo by The Canadian Press/Jonathan Hayward
Previous story

Municipalities and residents in British Columbia are set to argue that the proposed route of the Trans Mountain pipeline expansion would damage sensitive ecosystems, harm public parks and trails and adversely impact homeowners.

Municipalities and residents in British Columbia are set to argue that the proposed route of the Trans Mountain pipeline expansion would damage sensitive ecosystems, harm public parks and trails and adversely impact homeowners.

The National Energy Board will hold hearings starting Monday on the route that would run through Burnaby, Coquitlam and north Surrey. Burnaby is a major opponent of the project and has publicly battled Kinder Morgan Canada.

Burnaby will present for three days at the hearings, saying in a statement it will demonstrate the "significant and unacceptable" financial, environmental and social risks of the company's proposed route through the city.

"Because of the damage and disruption it would cause to the city and Metro Vancouver's environment, economy and neighbourhoods — in perpetuity — the City of Burnaby is determined to ensure that this route is never approved," said Mayor Derek Corrigan in the statement.

The Government of Canada approved the 1,147-kilometre pipeline project in November 2016 along a roughly 150-metre wide corridor. The detailed route approval process will determine the exact placement of the new pipeline.

People who anticipated their lands may be adversely affected by the route were able to file statements of opposition. The National Energy Board began holding hearings on the route in late November and has approved some segments in eastern B.C. and Alberta.

The hearings starting Monday cover a hotly contested Metro Vancouver portion of the route. Several residents and a land-surveying company are scheduled to speak at a Burnaby hotel over eight days, before a second set of hearings is held in March.

Steve Kean, the president and chief executive officer of Kinder Morgan told investors in a conference call last week that the Texas-based company was waiting to see if the NEB would issue a right-of-entry order on properties, which would force landowners to allow access in exchange for compensation.

"If we get objections to the route, we get a right of entry first," said Kean said in the Jan. 17 call.

"And then the question becomes what's the level of compensation involved? But first, we need to have the right of entry and then we can determine or reach an arrangement on the compensation level. But the main thing in my mind is we need to see the route hearings progress."

In documents filed with the energy board, Burnaby says the proposed route passes through conservation areas and parks that provide critical green space and extensive trail systems to the public. Significant amounts of trees and vegetation would be removed and sensitive creek and river ecosystems would be impacted, the city says.

The existing Trans Mountain pipeline has carried oil from near Edmonton to a marine terminal in Burnaby since 1953. The company tried to double the new line with the existing pipeline where possible, but in Burnaby, the old line runs beneath neighbourhoods and city streets, said spokeswoman Ali Hounsell.

"Throughout the Lower Mainland, the cities have kind of grown up around the pipeline," said Hounsell. "In some cases ... it's actually less impactful to go through areas that are not where the existing pipeline is."

However, the proposed route does run along municipal roads in Coquitlam. The city says in documents filed with the energy board that the route will negatively impact municipal operations and potentially incur millions of additional costs for routine operations, maintenance and rehabilitation work.

The route in Coquitlam does not parallel the existing pipeline, said a Trans Mountain spokesperson.

She noted that the federal government's approval came with 157 conditions, including that the company create environmental protection plans and minimize impacts in sensitive areas. The company is also committed to returning any environment it has disturbed back to its previous state, including replanting trees, she said.

A group of Burnaby residents remain concerned about the project's impact on green space. Six households are set to speak about the portion of the route that runs through a forested area that buffers their quiet residential neighbourhood from a Shell Canada tank farm.

The forested area is protected by a statutory covenant that obligates Shell to maintain it as a buffer. In documents filed with the energy board, the residents say the pipeline construction, including plans to remove trees, potentially violates the covenant.

Karim Dossa writes that one of the main reasons he and his wife bought their house was the pristine green belt, and over the years, they have witnessed a "myriad of wildlife" including bears, coyotes and a variety of birds and insects. He adds he's concerned about spills or accidents.

"As landowners who have invested our life savings in the house, we are traumatized by the impact this project will have on the quality of our lives, the value of our land and home and the legacy we wish to leave to our children and grandchildren."

Shell Canada said it has been in touch with Kinder Morgan regarding their proposed pipeline route and discussions are ongoing.

At least one scheduled participant has already resolved its issues directly with the company. Habitat for Humanity Greater Vancouver is scheduled to speak Friday but is not planning to attend, said director of operations Stephani Baker.

The organization had raised a number of concerns about construction in a green space that borders 27 of its townhouses in Burnaby. But after an arbitrated meeting in December, Kinder Morgan addressed all its concerns, including committing to add an alternate path for children to walk to school, said Baker.

"From our perspective, the best option was to have a face-to-face conversation," she said. "They were very willing to accommodate and work with us going forward."

James Stevenson, a spokesman for the National Energy Board, said the regulator will work as expeditiously as possible but the standard timeline for a decision following route hearings is about three months.

Editor's note: This is a corrected story. An earlier version quoted a spokesperson who said the new pipeline parallels the existing right-of-way in Coquitlam. In fact, the new pipeline does not parallel the existing line. This article was updated at 8:05 a.m. ET on Jan. 22 to add comments by Kinder Morgan CEO Steve Kean.

After promising to deploy

After promising to deploy "every tool in the toolbox to stop this pipeline", the NDP defended it in court and has been completely silent on it since. Not much effort and where is Premier Horgan now? On a junket to Asia to shill for LNG and promote the industry multinationals accompanying him. Quite the environmentalist John, approve the environmentally destroying and money sucking black hole called Site C, defend KM, and flog LNG, while claiming blah blah environmental protection, blah blah we will reduce emissions, blah blah we are acting on climate change, blah blah blah. His actions are aligning perfectly with the other pretend NDP in Alberta and if it continues, will absolutely destroy the NDP Party. Communities believed and supported the NDP all their lives only to be stabbed in the back when you got power. That ground shaking isn't yet another fracking caused earthquake, it's Tommy Douglas trying to get out of his grave.

" … 157 conditions, including that the company create environmental protection plans and minimize impacts in sensitive areas. The company is also committed to returning any environment it has disturbed back to its previous state, including replanting trees, she said."

These companies only hire consultants they can pay to come up with BS plans that fulfil the companies' mandate and best interests for the least cost.

NO ONE can ever return any "disturbed environment" back to its previous state. Any trees replanted will not be allowed near the pipeline right of way or control zone, where they inevitably, previously grew.

Will a three foot sapling replace a sixty to one hundred foot mature, majestic tree? Wildlife habitat is destroyed - where are the displaced animals to go, the YMCA? Dynamic communities of flora and fauna are eradicated.

But greed and the shareholders are satisfied?

George Heyman is angry about NEB help for Kinder Morgan