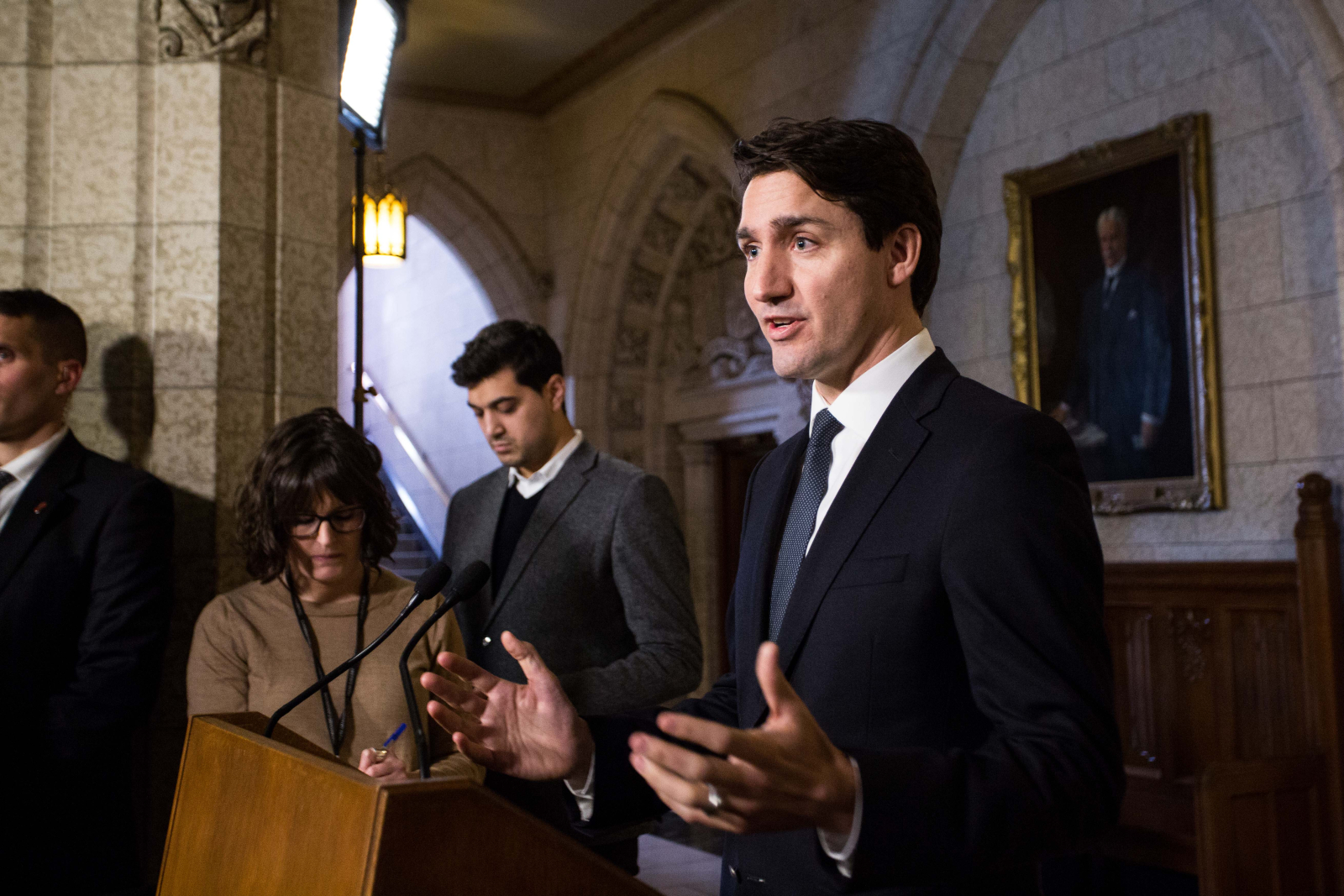 Prime Minister Justin Trudeau apologizes to the Canadian public on Dec. 20, 2017 after being found in contravention of ethics laws for a Christmas vacation on the Aga Khan's private island in 2016. Photo by Alex Tétreault
Previous story

"Justin Trudeau broke the law. A first in Canadian history for any sitting Prime Minister," reads a tweet from Conservative Leader Andrew Scheer on Jan. 5, 2018. Is it true?

In December, Mary Dawson, then the conflict of interest and ethics commissioner, found Prime Minister Justin Trudeau contravened four sections of the Conflict of Interest Act in relation to vacations on a private island owned by the Aga Khan.

The findings prompted Andrew Scheer to tweet that Trudeau had broken the ethics law, a historical first for a prime minister of Canada.

How accurate was the Conservative leader’s claim?

The Canadian Press Baloney Meter is a dispassionate examination of political statements culminating in a ranking of accuracy on a scale of "no baloney" to "full of baloney" (complete methodology below).

This one earns a rating of "a little baloney." The assertion is mostly accurate but more information is required. Here’s why:

The Trudeau case stands out as the only one in which a sitting prime minister was found to have violated a federal statute.

However, the issue of prime ministerial wrongdoing is not quite that simple, said Michael Atkinson, a professor with the Johnson Shoyama Graduate School of Public Policy and associate member of the department of political studies at the University of Saskatchewan.

"First, we haven’t had a federal ethics law for very long, so it is a bit misleading to invoke a standard that most prime ministers couldn’t breach if they wanted to. Second, breaking rules, whether laws or codes, is not the only standard for ethical evaluation."

The Conflict of Interest Act came into effect in 2006. It has applied only to Trudeau and his Conservative predecessor, Stephen Harper.

However, there are other examples of prime ministers being sanctioned for impropriety, facing serious accusations of wrongdoing or, at the very least, being called to explain their actions.

"We have had prime ministers whose dealings with private interests have proven exceedingly costly to their reputations and to the parties they led," Atkinson said.

Here’s a look at some of those cases, in chronological order:

The Pacific Scandal — John A. Macdonald’s Conservative government was rocked by allegations that wealthy Montrealer Hugh Allan had been promised a contract to build a cross−country railway in exchange for more than $350,000 in political donations. Macdonald professed innocence, but he resigned as prime minister in 1873.

Schreiber Affair — A federal inquiry led by Justice Jeffrey Oliphant found in 2010 that it was inappropriate for former prime minister Brian Mulroney, after leaving office, to accept cash−stuffed envelopes from German−Canadian businessman Karlheinz Schreiber. Oliphant said Mulroney "failed to live up to the standard of conduct that he himself adopted in the 1985 ethics code" for ministers, parliamentary secretaries and other senior public office holders.

Shawinigate — Jean Chretien was dogged by accusations in the 1990s of inappropriately using his influence to seek financing from the Federal Business Development Bank on behalf of Yvon Duhaime, owner of the Auberge Grand Mere hotel. At the time, Chretien was part−owner of an adjacent golf course, despite an attempt to sell his shares.

Contempt case — In March 2011, the Speaker of the House of Commons chastised Stephen Harper’s Conservative government for withholding the full costs of anti−crime measures, corporate tax cuts and a planned fighter jet purchase. It led to the government’s defeat on a non−confidence motion declaring the government in contempt of Parliament.

Given the historical record, Scheer’s claim contains "a little baloney."

No baloney − the statement is completely accurate

Full of baloney − the statement is completely inaccurate