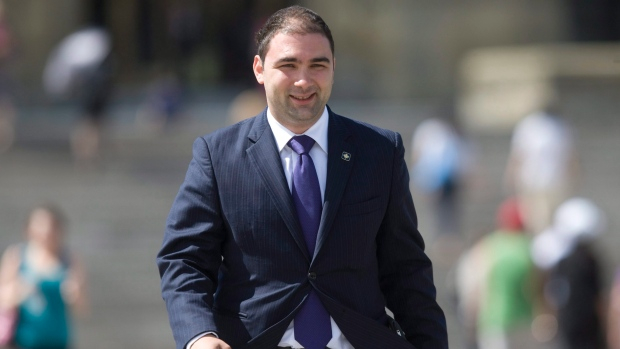 Dimitri Soudas, former communications director for Stephen Harper, walks away from the Peace Tower on Parliament Hill in Ottawa. Photo by The Canadian Press
Previous story
Next story

A former senior aide to Stephen Harper has confirmed he had known that there were "rumours" about Patrick Brown's conduct, but didn't follow up with action as he was a volunteer with Ontario's Progressive Conservatives.

Dimitri Soudas, who was once the communications director for former prime minister Harper, made the admission on Friday in response to comments made earlier by Tory MPP Lisa MacLeod. Brown resigned as PC leader early on Thursday morning, in the face of sexual misconduct allegations reported by CTV News.

National Observer has not independently verified the allegations.

Soudas had reportedly volunteered to run Brown’s election war room. His name came up regarding the sexual misconduct allegations after MacLeod told media Jan. 26 that she spoke with campaign officials "two or three times" as recently as December about rumours related to Brown.

According to reports, MacLeod added later that she had brought those rumours to Soudas. Later on Friday, Soudas responded in a series of tweets, suggesting that MacLeod had indeed informed him of rumours, but that they weren’t specific.

“Ms. McLeod [sic] informed me of rumours and allegations in regards to her then leader, Mr. Brown. She did not have specific details. Just rumours. I strongly urged her to raise these issues directly with Mr. Brown as I was a volunteer and she was a caucus member,” he tweeted.

“I also urged her to raise this issue with caucus. She clearly didn’t...according to Ms. McLeod. These rumours were given to her by Eric Lindros.”

Lindros is a former NHL player who has worked with MacLeod on her private member’s bill on concussion education.

MacLeod has said she didn’t bring the rumours to senior-level officials because she “didn’t have a lot of trust in a lot of Patrick Brown’s people.”

Several key members of Brown's staff resigned as the allegations against him surfaced, saying they did not approve of how he handled the situation. MacLeod said in a tweet those who resigned were not the people she had spoken to about Brown.

"There's been a lot of speculation and people have heard a lot of different things throughout a period of time. So, there were lots of things that were percolating that a lot of people heard," she said.

Brown's sister defends him, Fedeli to be interim leader

Brown resignation came a few hours after a hastily-called news conference in which he emphatically denied what he called "troubling allegations" about his conduct and his character.

The allegations were made by two women who spoke to CTV News. CBC News also quoted allegations raised by one woman about Brown's conduct in a report on Thursday.

The CTV report states that one of the women was in high school when Brown asked her to perform oral sex on him. The other, the report stated, was a university student who alleges Brown sexually assaulted her. Brown's lawyer has said he "categorically denies these false and defamatory allegations."

Brown's sister, Stephanie Brown, said in a Facebook post that he was the victim of a "political hit."

She describes Brown as a kind man who works tirelessly for others and says he did not deserve what happened to him this week.

Vic Fedeli, 61, was selected by the PC caucus to replace Brown as interim leader during a meeting Friday morning. It's not immediately clear if he will lead the party in the scheduled June provincial election.

Fedeli is the party's finance critic and represents the northeastern Ontario riding of Nipissing in the provincial legislature.

The Tory caucus erupted in applause as Fedeli's appointment was announced, with members chanting his name as reporters entered the room.

Asked how he was feeling about the appointment, Fedeli said "fabulous."

Fedeli has called Brown's alleged actions "deplorable." He also said, however, that he "never saw anything that would have indicated any activity such as that" during the time he spent with Brown.

The PC caucus will investigate how it dealt with allegations raised against Brown, Fedeli said, noting he would not support Brown remaining on as a Tory legislator if the allegations have not been addressed.

"If these allegations are standing at the time of the election I would not sign Patrick Brown's nomination papers," he said.

Fedeli entered politics in 2003 when he was elected mayor of his home town, North Bay, Ont. He served two terms as mayor before running, and winning a seat, for Ontario's PCs in 2011.