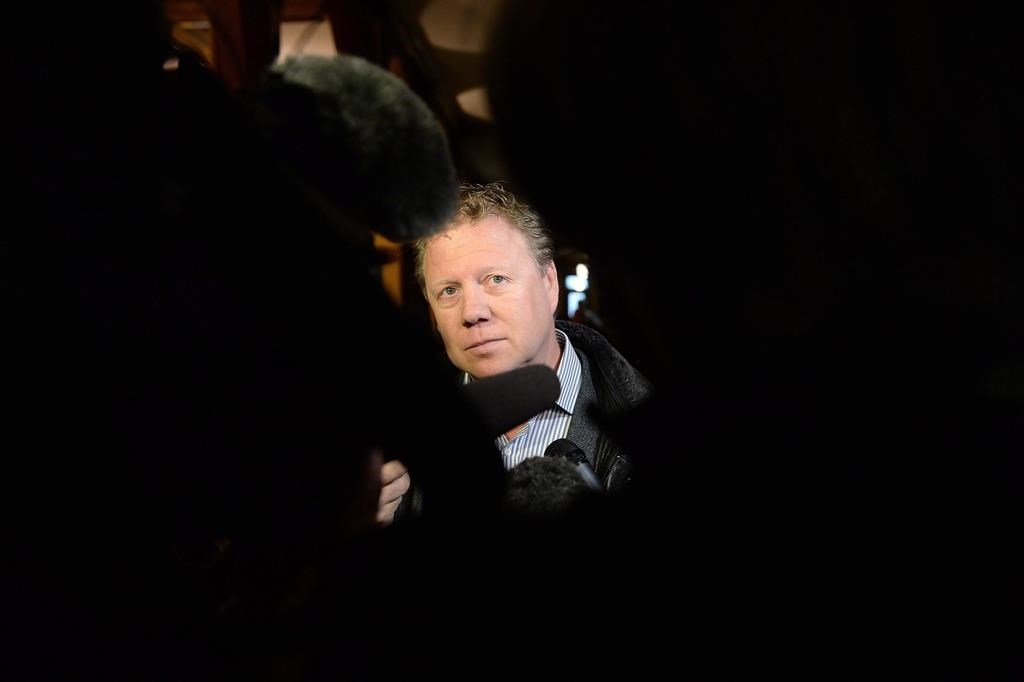 Rick Dykstra, President of the Ontario PC Party, arrives for a meeting to pick an interim leader to lead them into the June provincial election at Queen's Park in Toronto on Friday, January 26, 2018. Photo by The Canadian Press/Nathan Denette
Previous story
Next story

Rick Dykstra announced his resignation late Sunday in a Twitter statement hours before Maclean's Magazine published allegations that Dykstra was accused of sexually assaulting a young Conservative staffer in 2014, when he was an MP.

In Dykstra's statement, he wrote he would "step aside" to let someone else take the helm as the party chooses its new leader.

He did not reference any of the allegations reported by Maclean's, but the magazine said Dykstra told them he "will be responding."

Moving forward and moving on.

Maclean's said the staffer reported the incident to Ottawa police in 2014, saying that Dykstra sexually assaulted her after a party.

The magazine reported that senior Conservative campaign operatives were aware of the allegations and decided to allow him to run anyway.

Dykstra went on to lose his St. Catharines riding, and became president of Ontario's Progressive Conservatives.

His resignation came just days after Patrick Brown quit as party leader amid sexual misconduct allegations, and on the same day as a major shakeup that included two key staff members returning to jobs they had quit just days earlier.

Chief of Staff Alykhan Velshi and communications director Nick Bergamini were among four key party members who resigned Wednesday night, just minutes before CTV News aired graphic allegations made against Brown by two women. The allegations have not been independently verified by The Canadian Press, and Brown has said they are "categorically untrue."

A staff memo obtained by The Canadian Press, says Velshi and Bergamini are now back in their old roles, while several other high-level positions have been eliminated in a "reorganization" following the Brown debacle. An executive director, two deputy chiefs of staff, a party adviser and a number of junior and mid-level jobs are being slashed, according to the email sent by Velshi on Sunday.

"With any change in leadership comes a need for reorganization," Velshi wrote. "While reorganizations are always difficult, they are also sometimes necessary."

The staffing changes come as a political race takes shape to determine Brown's successor, who will attempt to lead the Tories to victory in June.

The Tory caucus chose Vic Fedeli as its interim leader on Friday, and caucus members had hoped the Nipissing MPP would maintain the leadership role throughout the campaign. But later Friday, the party's executive voted to hold a leadership race and select a new leader sometime before March.

Fedeli told reporters he would be a candidate for the permanent role.

Among the other names currently circulating as potential leadership candidates are several Tory members who aren't part of the legislative caucus.

They include Rod Phillips, a former executive at Postmedia and star candidate for the party in Ajax, Ont., as well as Caroline Mulroney and Christine Elliott, who lost to Brown in the 2015 leadership contest.

Mulroney, the daughter of former prime minister Brian Mulroney and another PC candidate, greeted the news of a leadership race positively.

"Our party is stronger when all of our members across the province have their voices heard about who will lead us into the next election,'' she said in a statement on Twitter.

Toronto Mayor John Tory and Conservative MP Lisa Raitt, meanwhile, have shot down speculation about their interest in leading the provincial party.

Tory broke the news on Twitter Sunday evening, saying he's had people approach him about seeking the PC leadership.

"I have the privilege of being mayor of a city I love, and I hope to continue to do that job," Tory wrote.

Raitt announced earlier that she would not be running.

Ottawa-area MPP Lisa MacLeod, who hasn't said whether she plans to run for the top job, appeared to welcome Dykstra's resignation Sunday night.

"This is good news for taking back our PC party," MacLeod wrote on Twitter.