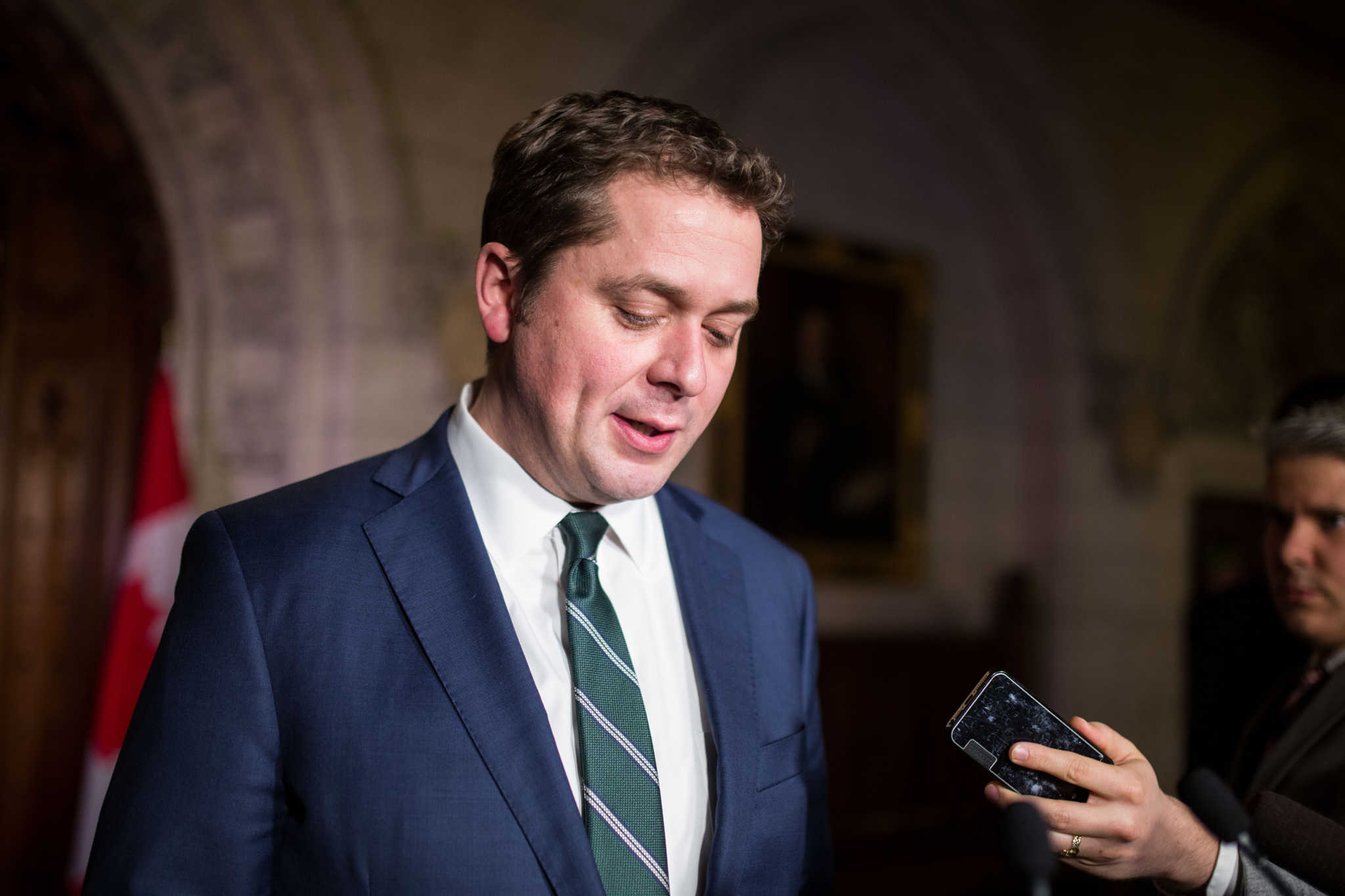 Conservative Leader Andrew Scheer looks down in the middle of a scrum with reporters in Ottawa as he announces a probe into his own party's 2015 war room. Photo by Alex Tétreault
Previous story
Next story

​Conservative Leader Andrew Scheer promised an independent, third-party investigation of the Rick Dykstra controversy Wednesday as his own caucus members wondered aloud how the Ontario MP was allowed to run for former prime minister Stephen Harper's Tories in 2015 despite facing serious allegations of sexual assault.

The party has been struggling since the weekend with how to respond to a report that a 2014 incident involving Dykstra and a Parliament Hill staffer was brought to the Conservative campaign's attention but seemingly resulted in no action being taking against the longtime Ontario MP.

But as differing accounts — many of them fuelled by anonymous sources — emerged about who at the party knew what when, Scheer said a substantive determination of facts is what's needed.

"The key is to make sure if there were breakdowns, if there was a lack of a process, if any of these allegations are true, obviously we have to make sure it doesn't happen again," he said.

"I think it is essential to guide that process going forward to have an understanding of exactly what happened."

Dykstra, who has denied the allegations against him, ultimately lost in his 2015 re-election bid which saw Harper lose power to the Liberals. Dykstra went on to become president of the Ontario Progressive Conservatives, a position he resigned after the details of the alleged assault were published by Maclean's.

The allegations have not been tested in court, nor have they been independently verified by The Canadian Press.

Scheer says results of probe to be made public

Scheer said the results of the investigation will be made public.

"I think that there is a real sense that restoration of the public's confidence in what life is like on Parliament Hill here is important."

At the same time, the party will also be strengthening its staff code of conduct, including requiring mandatory training, which will apply to candidates as well, he said.

Those ideas grew out of the Conservative caucus retreat earlier this year in Victoria, but were in announced Wednesday in tandem with the investigation.

Scheer — like many Conservatives — has insisted he personally knew nothing of the allegations against Dykstra or former Ontario Conservative leader Patrick Brown prior to a series of media reports that led to the pair's political downfall.

While in the initial aftermath of the duo's departure, MPs expressed disappointment in the allegations, they were largely quiet Wednesday on the issue of how they were handled by the party. At the time, Scheer would only say there would be "zero tolerance" for such behaviour going forward, a line parroted by most of his MPs.

Only Calgary MP Michelle Rempel spoke out, using a forceful speech Monday to call reports of how the party handled the incident "disgusting" and saying those involved should have no future role in the party.

By Wednesday, others were raising their own concerns.

"I don't know why the party didn't do anything at that time and they have to answer these questions," said Quebec MP Maxime Bernier, who finished a close second to Scheer in last year's leadership race.

A lack of a formal process existing at the time to investigate complaints lodged by staff against MPs has been cited as a barrier, and that's one part of the larger problem, said Ontario MP Erin O'Toole, who also ran for the party's leadership.

"We need to make sure is there's a system for vetting and dealing with these situations even during an election," O'Toole said.

What happened with Dykstra isn't the only ongoing investigation.

The Liberals are also investigating actions by members of their caucus; cabinet minister Kent Hehr resigned from cabinet last week after an Alberta woman alleged he'd made inappropriate remarks.

Prime Minister Justin Trudeau wouldn't say Wednesday whether the results of that one would also be made public.

But Liberal MPs said it is time to take a closer look at the code of conduct that is meant to address allegations of harassment between politicians.

The code was reviewed last fall, but Liberal MP Filomena Tassi, the government's deputy whip, said that things have changed so much in the past few months that it is time to examine it more thoroughly.

And a Manitoba senator said Wednesday she plans to create a safe, anonymous space for anyone who has been the target of sexual misconduct while working in and around the upper chamber.

Independent Sen. Marilou McPhedran, a human rights lawyer who has chaired independent inquiries into sexual abuse against patients, has set up a confidential email address ([email protected]) where anyone who has been an employee, intern or volunteer at the Senate can speak directly to her, or be referred to a lawyer she is hiring through her own office budget.

McPhedran said she does not know whether anyone will come forward, but she knows there is a "whisper network" on Parliament Hill and has heard talk of sexual misconduct against the people who work there.

— with files from Joanna Smith and Joan Bryden