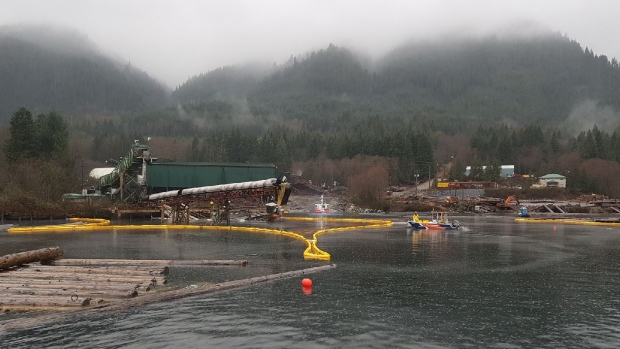 The cosmos must be messing with Justin Trudeau and Rachel Notley. Just as the Kinder Morgan pipeline controversy surges to fever pitch over oil spill impacts, a barge near Vancouver has sunk, spilling diesel into the ocean in the territory of the Squamish Nation.

Media reports about threatened trade wars between B.C. and Alberta and commentary on the role of Justin Trudeau's government will now be accompanied by pictures of containment booms, spill responders and affected First Nations.

The spill happened in Howe Sound, where orca whales were seen in recent days according to Squamish spokesperson Dustin Rivers. The orcas come to feast on herring, which are gathering for the annual spawning season in February and March.

The spill takes place amidst surging controversy over Kinder Morgan's Trans Mountain pipeline proposal which would increase tanker traffic to over a tanker per day travelling through Vancouver harbour. This week, the government of British Columbia announced new measures around spill control and diluted bitumen transport — a move seen as a blow to Kinder Morgan's pipeline proposal, igniting anger and threats of retaliation from Alberta.

Michael Lowry, communications manager for West Canada Marine Response Corp., said cleanup was underway and that this type of spill is not uncommon: "we get called out to spills of this size and nature on average 20 times a year."

"Along with the Canadian Coast Guard, our crews continued clean-up operations today within the containment boom (the vessel was contained yesterday with booms)," he said. "The product today was too thin for our skimming vessels, so crews used sorbent pads."

He said the company will soon have more information whether additional cleanup operations will be required tomorrow. But for Squamish Nation councillor and spokesperson Dustin Rivers, every fuel spill — no matter how fast or thorough the cleanup — is cause for concern.

"When spills happen, they can devastate our coastline. Oil spills directly impact our economy, culture, and community who have lived off our homelands for thousands of years. The risk of spills is always present in our minds, and our communities feel the consequences," Rivers said.

Rivers says the Squamish are especially concerned because herring are just beginning to spawn right near the location of the spill.

"There has been a massive increase in herring returning to the sound after a century of devastation. This has brought back killer whales and other whales. Our nation is deeply upset. This affects our rights, our economy and our community."

The cosmos must be messing with Justin Trudeau and Rachel Notley. Just as the Kinder Morgan pipeline controversy surges to fever pitch over oil spill impacts, a barge near Vancouver has sunk, spilling diesel into the ocean

The diesel spill took place on January 31 near the community of Port Mellon in Howe Sound, just north of Vancouver. A derelict barge sank, releasing diesel from equipment on the barge. Abandoned vessels and barges are a significant problem in Howe Sound. Squamish spokesperson Dustin Rivers said the nation has long demanded the federal government deal with the problem but without results.

Trudeau has showed over and

Trudeau has showed over and over that his promises are not to be given ant credibility. He and his smiling ministers (they're all very good at this) will pay their dues in 2019 !!
As for Notley, she's an NDP renegade, fit for the dust bin.

There's nothing NDP-like about the push for a pipeline. An NDP move would be to keep the petroleum jobs in Alberta. Even automating the labour makes more sense than pushing for a pipeline.

Just because a corrupt

Just because a corrupt National Energy Board gives their rubber stamp approval for a pipeline doesn't mean Killer Morgan has the social license to build it. Trudeau and Notley are hypocrites on a grand scale or just cuckolds for a very polluting industry. We have yet to find out who the buyers are of this dilluted bitumen? Not China which gets refined oil from other sources at a far cheaper rate, so then, who? Do Canadians understand the social, environmental costs of oil spills from pipelines, or from tankers? Keep the bitumen for Canadians and get more involved and evolved in renewables. We can give some of the subsides we give to oil to renewables and level the playing field. Time to give welfare oil the boot!!

I don't understand why nobody

I don't understand why nobody seems to be talking about upgrading bitumen before shipping it. Bitumen is particularly toxic and hard on pipelines. Also, the dilute medium has to be purchased from off shore and piped to Alberta. A few years ago, perhaps as much as thirty billion was spent towards construction of an upgrader in northern Alberta. Then construction stopped!!

Notley and Trudeau have

Notley and Trudeau have clearly not understood, perhaps not even read, the Nov 1, 2016, report of the Ministerial Panel that the Minister of Natural Resources set up after the NEB gave its approval for the pipeline. The report laid out six implied conditions needed for approval. These had to do with
- climate commitments
- national energy strategy
- First Nations reconciliation and UNDRIP
- economic rewards and risks
- the best route
- what are ‘social license’ and ‘Canadian public interest’?