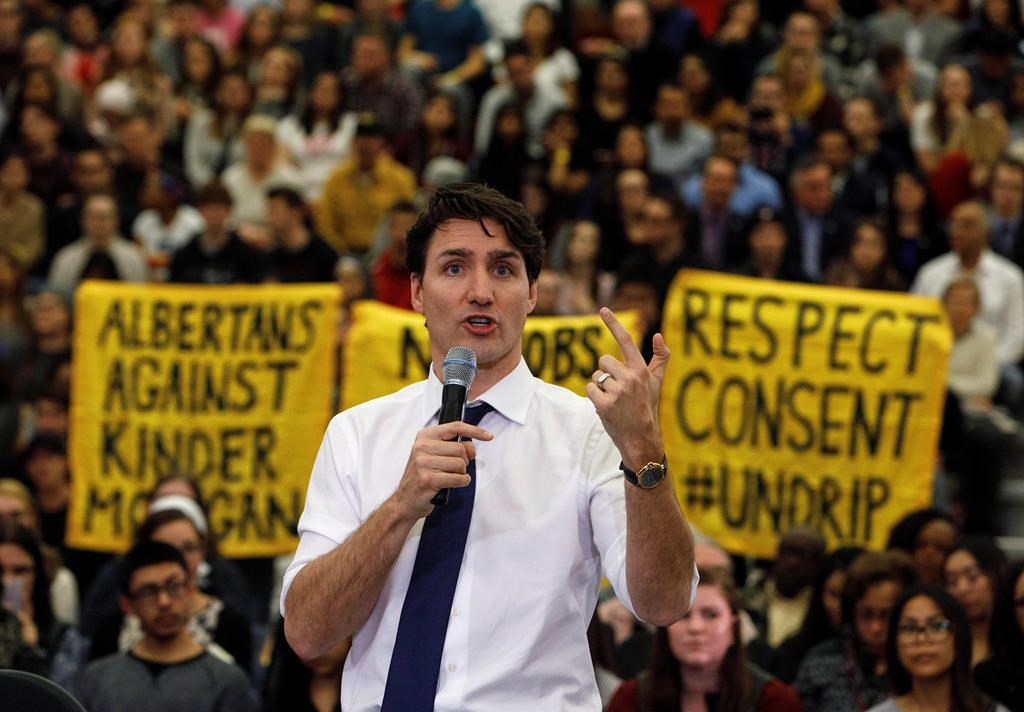 A disabled veteran, an Indigenous woman angry about racism and people worried about stalled oil pipelines had tough questions for the Prime Minister Justin Trudeau during a town hall meeting in Edmonton Thursday night.

A former soldier who lost a leg in Afghanistan was critical of Ottawa's plan to reform some veteran's programs, including changes to disability pensions.

"I was prepared to be killed in action," said Brock Blaszczyk, a former corporal who lost his left leg to a roadside bomb in Afghanistan. "What I wasn't prepared for, Mr. Prime Minister, is Canada turning its back on me."

Trudeau thanked the man for his service and said his frustration and anger are justifiable.

To some shouts and boos from the crowd, he defended his government's changes to veteran pensions, saying they shift the emphasis from lump payments to long-term services.

"We have significantly invested in services, rehabilitation support, investments in training and support for caregivers and families."

Trudeau said that program spending must be taken into account.

"Why are we still fighting against certain veteran's groups in court? Because they are asking for more than we are able to give right now," Trudeau said

A woman told Trudeau that Indigenous people continue to face racism and called for more action to better their lives.

The woman's voice shook with emotion as she spoke of the media vilifying Indigenous people. She mentioned murder trials underway in Winnipeg and in Saskatchewan where the victims are Indigenous.

"What are you going to do for our communities because I don't see you doing a lot, and that kind of hurts my heart."

The prime minister said the status quo is not acceptable.

He said his government is making progress on righting wrongs, but reconciliation is going to be a long road.

On pipelines, Trudeau faced questions from a man worried about stalled oil pipeline projects that he said are needed to help the economy and create jobs.

As the man spoke others in the crowd held up big yellow signs that read "Albertans Against Kinder Morgan" and "No Jobs On A Dead Planet."

The prime minister told the crowd that Canada must be able to get its resources to new markets and reaffirmed his determination to see the construction of the Kinder Morgan pipeline expansion project through British Columbia.

But he said it also needs a world-class plan to protect the oceans and a climate change plan to reduce carbon emissions.

"You cannot have any one of them, unless you have all three of them," he said. "That is what this government gets and that is what we will stand up for."

A small business owner said he's worried about growing payroll taxes, such as the increase to Canada Pension Plan benefits.

"The strategies that are currently being employed seem to limit the ability of employers to hire people."

Trudeau said the Liberal have lowered the small business tax rate and plan to lower it again. He said it's important to increase CPP benefits because more people move from job to job and can't necessarily take their pension plans with them.

"Getting that balance right of making sure we're securing people's retirement while at the same time giving our small businesses more opportunity ... this is all part of what we're working on."

Trudeau entered the hall in Edmonton's MacEwan University to mixed chorus of applause and boos. His answers were interrupted periodically through the night by angry shouts, although Trudeau never lost his composure.

He then spoke to a crowd of Liberals at a fundraising event.

The prime minister is to hold another town hall meeting on Friday in Nanaimo, B.C.