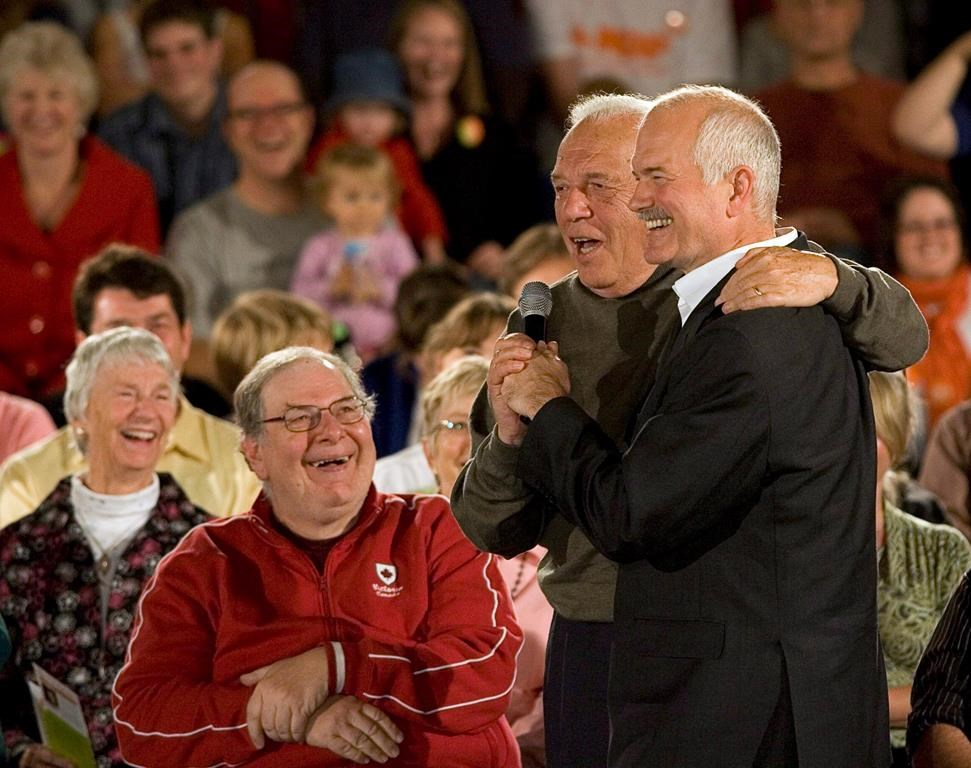 "He cared deeply about his province and devoted much of his life to trying to make it a better and fairer place to live. His love of the province was surpassed only by his devotion to his family. He will be sorely missed," said the statement, issued on behalf of Barrett's family.

First elected to the B.C. legislature in 1960, the former social worker from Vancouver who became known as the champion of the little guy would be elected to the assembly eight times.

He was also elected as a federal New Democrat MP in 1988 in the former Victoria-area riding of Esquimalt-Juan de Fuca.

Barrett made political history when his left leaning New Democrats defeated the five-term Social Credit juggernaut governments of W.A.C. Bennett in 1972. His three-year government from 1972 to 1975 was short-lived but enduring for its political accomplishments and fireworks.

Barron's magazine dubbed Barrett, "Allende of the North," after the elected socialist Chilean leader Salvador Allende was deposed in a military coup in 1973.

He introduced welfare reforms and created B.C.'s Labour Relations Board, which allowed workers and employers to attempt to resolve their issues without resorting to the courts. He also stopped the practice of mining in parks.

Many of Barrett's reforms have stood the test of time, including the Agricultural Land Reserve and Pharmacare.

"What he was able to accomplish in a three-year mandate was extraordinary," Horgan once said in an interview.

Horgan said he was working in Ottawa when Barrett was elected as a federal New Democrat in the late 1980s. Barrett ran to lead the federal NDP in 1989, but lost to Audrey McLaughlin.

"When he came to Ottawa it was like nobody had ever seen anything quite like him before," said Horgan. "He came to Ottawa with a B.C. swagger. He was so brash and so out there, and holding court."

But it was Barrett's political rivalry with the Bennett family, former premiers W.A.C. Bennett and Bill Bennett, that provided the ingredients for B.C.'s left-right, no-holds-barred politics, said Horgan.

"In the day, from the late 1960s to the middle of the 1980s, there was a battle between not just two perspectives, but two powerful people that became iconic in B.C. history," said Horgan. "They shaped the B.C. battles, the politics the rest of the country looked at. It was the clash of these two giants that held sway over two political dynasties, the Socreds and the NDP."

Brian Smith, a former Social Credit attorney general, said Barrett and Bennett would stare each other down during long debates in the legislature.

"Barrett and Bennett personally disliked each other," said Smith. "It was palpable. Barrett would sit there and stare at Bennett and try and put the whammy on him."

But Smith said he saw Barrett's sense of justice and compassion in action in 2006 when the former premier testified as a character witness for a Victoria barber convicted of tax offences. Smith said Barrett's testimony convinced the judge to sentence the barber to house arrest rather than jail.

"I thought, Dave Barrett, you are a pretty neat guy. Even in your failing years you have time to help somebody," said Smith. "That was Dave Barrett at his best."

The B.C. Federation of Labour said Barrett's accomplishments include making it possible for government employees to unionize.

"He was a bold premier for a bold era. Barrett's government marked a political coming of age for our province," federation president Irene Lanzinger said in a statement. "His term as leader of B.C. certainly wasn't a long time, but it surely was a good time to make B.C. a better place for working people."

In Opposition in 1964, Barrett pressed the government to preserve forest land in Cypress Bowl from development and in 1975, as premier, Barrett established Cypress Park.

The big interview Alan Thicke did before he died