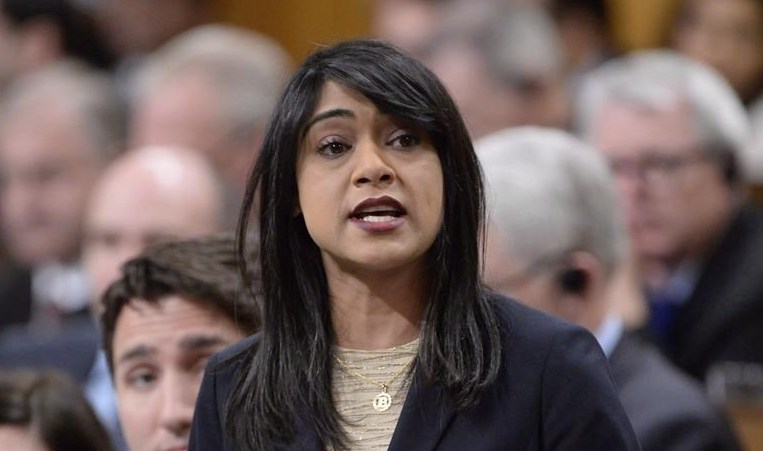 Liberal cabinet minister Bardish Chagger was never told about allegations that a senior staffer had acted inappropriately towards a job applicant because he had already left Ottawa and returned to the private sector, her spokesman said Monday.

"I find these behaviours entirely unacceptable," Chagger, the minister for small business and tourism, said in response to questions about allegations that Vahid Vidah, her former policy adviser, had made sexually suggestive remarks to a young woman applying for a job.

"They are not tolerated — not in my office, not in the government," said Chagger, who is also the government House leader. "So, when I was made aware of this, it was last week, and our office is definitely looking at finding out why I didn't know sooner."

HuffPost Canada published a piece written by Myriam Denis, who alleges Vidah reached out to her about a job in May 2016 and then made sexual comments during their meetings, after which she came to realize he lacked the authority to interview her.

After she was turned down for the position following a formal interview process, Denis wrote that she informed Rachel Bendayan, who was then chief of staff to Chagger, about her experience with Vidah.

Bendayan thanked her for bringing the matter to her attention, confirmed she had not asked Vidah to reach out to her, called the encounter inappropriate and noted he was no longer working there, Denis wrote.

Jonathan Dignan, director of communications to Chagger, said Bendayan did not share what Denis had told her because Vidah had already left.

"The person had left Ottawa, returned to the private sector, was on his way out of the office at the time," Dignan said Monday.

Bendayan, who is currently on parental leave, emailed a statement late Monday night, confirming that Vidah no longer worked for the government at that time and that she had no contact with him.

"I have had my own experience of inappropriate advances in the corporate world, and regret that this practice continues to haunt us in all sectors of society. It is through speaking out that we will and are bringing about change," she wrote.

"I'm glad there is now a formal process and team in place within government to address these issues," she wrote.

Vidah did not respond to a request for comment by The Canadian Press Monday.

However, he told HuffPost Canada that while he might have mentioned his romantic life to Denis, he did not make any sexual advances, and that he nonetheless "sincerely regrets" anything that made her feel uncomfortable.

Asked whether Chagger's office would be looking further into why Bendayan did not take further action, such as by alerting Chagger, Dignan said they would be focusing instead on ongoing efforts to improve how harassment is dealt with on Parliament Hill.

"When it comes to these kind of things, I think it makes sense to take a holistic kind of approach," said Dignan. "I think lessons that can be learned across the board."

Meanwhile, the Prime Minister's Office has set up a small team to handle harassment complaints from political staffers working for cabinet ministers.

Eleanore Catenaro, a spokeswoman for Prime Minister Justin Trudeau, said the two senior aides on the team respond to questions and complaints from ministerial staffers — including those in the PMO — regarding sexual harassment and other inappropriate workplace behaviour.

"This was set up to deal exactly, precisely, with those kinds of things in a clear, safe and respectful way," Catenaro said.

The Harassment Resolution and Investigation Office, which was set up last October, can also arrange for an independent investigation into allegations.

The office is being led by Brett Thalmann, who Catenaro said is responsible for human resources in the PMO, along with Sabina Saini, deputy director of policy.

Catenaro said the PMO is currently working to add the procedure to the official policy for political staff, which currently does not address harassment.

News of the office came to light after HuffPost Canada published the allegations by Denis, who also alleges she was contacted by Claude-Eric Gagne —then a senior official in the PMO — with a flirtatious message months after he had interviewed her for a job she did not get.

Gagne resigned last week after being the subject of a since-concluded third-party investigation into other allegations, which he denies.

According to HuffPost Canada, Denis said after she had shared details on social media, Thalmann reached out to ask her about the incident and said he could refer her to the third-party investigator.

Catenaro said he was doing so in his capacity as the head of the new office.