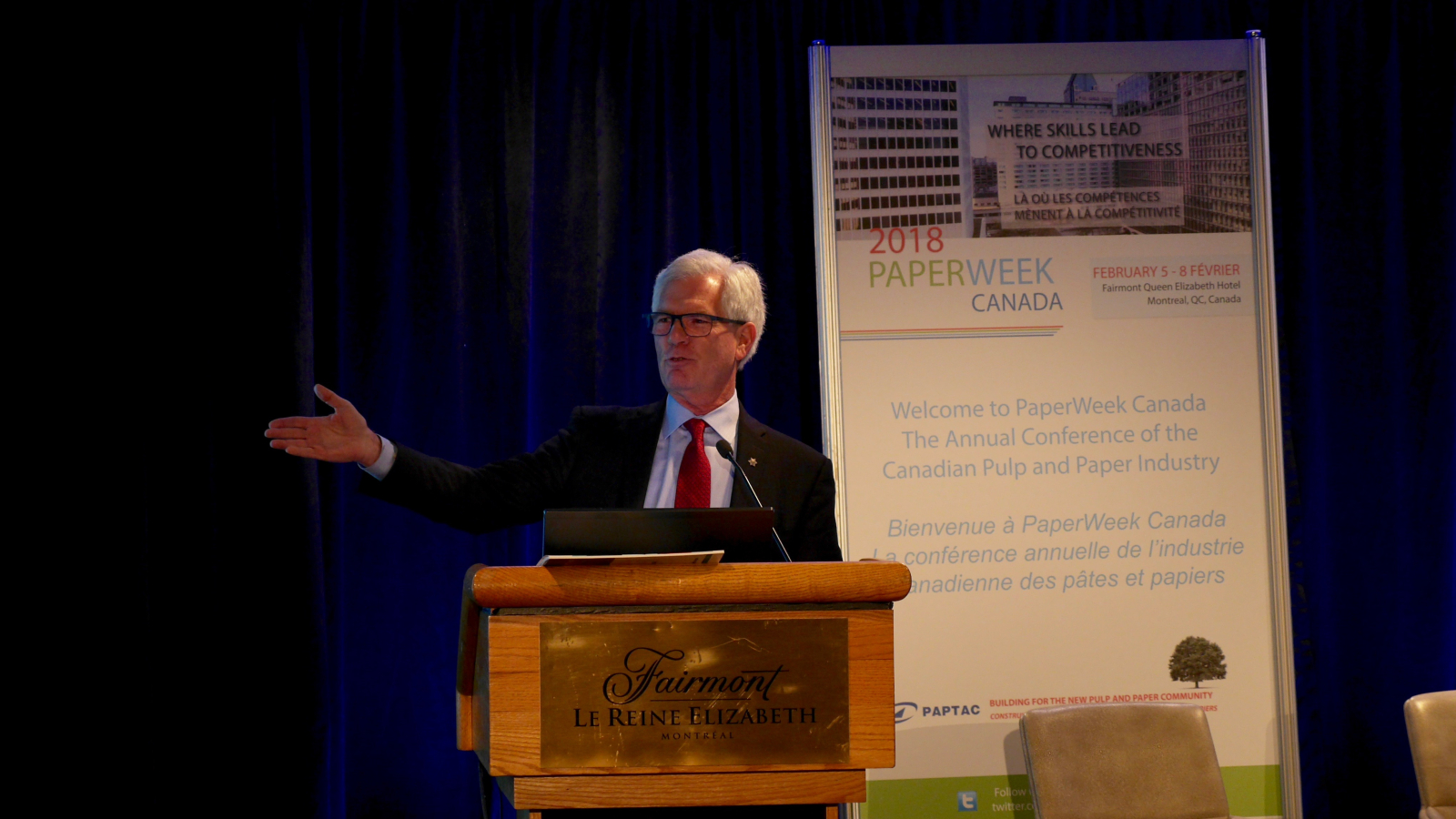 As trade tensions heighten between Alberta and British Columbia, the federal government says it's willing to mediate — but not negotiate — on the Kinder Morgan Trans Mountain expansion.

Alberta Premier Rachel Notley announced on Tuesday that it will boycott the import of wines from its west coast neighbour, in response to the introduction of new oil transportation restrictions in B.C. that could impact the controversial oilsands expansion project.

Ottawa is prepared to discuss the Trans Mountain expansion with both provinces, said Natural Resources Minister Jim Carr on Wednesday, but it will not back down from its approval of the oilsands pipeline.

"We have in this case determined what we believed the national interest to be and we stick by that decision."

Threats to electricity and booze

In January, B.C. Premier John Horgan announced new oil spill regulations that include restrictions on transportation until "the behaviour of spilled bitumen can be better understood." The move could further delay or complicate completion of the $7.9-billion Trans Mountain expansion, which aims to triple the capacity of an existing pipeline system, and ship 890,000 barrels of oil per day from the oilsands to the City of Burnaby.

At the time, Notley characterized the maneuver as "political game-playing.”

"We have in this case, determined what we believed the national interest to be and we stick by that decision," said Natural Resources Minister Jim Carr in Montreal.

While supporters of the pipeline, including Alberta, argue that it will create much-needed jobs and revenue, its opponents argue that it poses an unacceptable risk to the health of local ecosystems and could wipe out an endangered local killer whale pod through increased tank traffic, and possible oil spills.

Speaking to reporters on Wednesday however, Carr maintained that the pipeline is in Canadians' best interests.

“We've done our consulting, unprecedented consulting among Canadians and we stand by our decision to have that pipeline built,” he explained, adding that the pipeline will create thousands of jobs and bring Canadian oil to markets in Asia. ​

“The very reasons we used in the rationale that we have explained to Canadians to approve the pipeline exist today as well."

Kinder Morgan's Trans Mountain proposal, said the minister — subject to more than 150 environmental, technical and financial conditions — respects the Alberta government's climate plan and the Pan-Canadian Framework on Clean Growth and Climate Change. It can be compatible with Canada's transition to a low-carbon economy, he insisted.

“We believe that responsible energy development means that you develop economic potential while you sustainably develop the energy industry, as that's what we have done and that's what we will continue to do,” said Carr.

He spoke at a keynote speech at the BIOFOR conference, an annual Canadian forestry event in Montreal, after a tough year for the sector, which was hit by American countervailing and anti-dumping duties on Canadian softwood lumber.

Carr said the federal government has “stepped up” to the situation.

“Our government's position has been clear and unequivocal: the U.S. duty are unfair and unwarranted,” he said. “We are vigorously defending Canadian workers by challenging the duty before the World Trade Association and in the North American Free Trade Agreement.”

Carr said the country and forestry sector have been united in the face of protectionist tones from the U.S., and said forestry sector's growth needs are similar to those of the oil and gas industry. Ninety-nine per cent of Quebec's softwood lumber exports are sent to the U.S., he added, which makes expansion a "critical element of our trade policy going forward."

According to a 2017 federal report on the state of Canada's forest, in 2016, approximately 211,000 people were employed by the forest industry. In the same year, the forest industry contributed $23 billion to Canada’s gross domestic product.

Carr praised the sector for its ongoing transition to the bioeconomy — which makes use of renewable resources — and increased production of bioproducts, including biochemicals and bio energy made from wood-fibre residue.

The federal forestry report identifies bioenergy as the second-largest source of renewable energy after hydroelectricity in Canada. The global market potential for bioproducts, it said, is estimated to be more than $100 billion.

It will play a critical role in providing alternatives to fossil fuel energy in the years to come, said Carr.

With all due respect to

With all due respect to Minister Car, the record has to be clear. The National interest does not take priority over the well being and health of one province, its people, the First Nations Treaty Rights that are a cornerstone of Canada's founding or over the United Nations Declaration of the Rights of Indigenous Peoples, over our economy and over our vulnerable environment. Never. The assertions by Prime Minister Trudeau, Minister Carr and others in the federal government, that a rigorous review of this pipeline project occurred is patently false and misleading. This has been widely acknowledged by some of the most informed interveners in the NEB hearings and by many in our communities. This is fundamental. Need it be said yet again. The NEB hearings were a disgrace to the country. They were neither independent nor impartial. One intervener who withdrew from the NEB hearings in disgust was was Marc Eliesen, former CEO of B.C. Hydro,Chair and past CEO of Ontario Hydro, Chair of Manitoba Hydro,and Deputy Minister of Energy for both Ontario and Manitoba.
Marc Eliesen, a man not to be dismissed, made this final statement about the NEB process: “Accordingly it is not only British Columbians, but all Canadians that cannot look to the Board’s conclusions as relevant as to whether or not this project (in this case the Northern Gateway) deserves a social license.” Some reasons for this criticism:
-In first round of hearings NEB ordered Kinder Morgan to answer substantially only 4.5% of questions posed
- emergency response plans were not fully made available to Vancouver or B.C.,
-there was no reliable way to test evidence presented by Kinder Morgan as cross examination of witnesses was largely prohibited
-upstream and down stream impacts such as climate change not considered They were for Energy East where Trudeau stood to loose more MPs
-NEB failed to ensure Kinder Morgan's environmental and risk assessment conformed to best practices
-NEB engaged in public deception
-NEB endorsed a fraudulent process
-• The Board’s requests for information on TMX’s economic case were tantamount to a sweetheart written cross-
-• Canada Department of Justice said evidence given without cross examination should be rejected
-• B.C.’s request for elaboration on the risks of a spill and the mitigation procedures in place were denied by the board
As well Trudeau said repeatedly during his campaign for last election, that an overhaul of the NEB would take place and this would apply to the review of the Trans Mountain pipeline. This did not happen. At no time was the NEB to consider the great risk of catastrophic dilbit spills in Port Vancouver or in the risky to navigate waters of the Salish Sea, Haro Straits or Race Rocks where tugs and pilots are very challenged to keep tankers they are guiding from grounding. Can't happen. Well it just recently did to a double hulled tanker with state of the art navigation aids in the China Sea. A ship collision led to a fire, explosion and sinking releasing millions of gallons of condensate into the ocean. No study was contemplated about the impossibility of World Class spill cleanup of a dilbit/bitumen spill. We are expected to accept Minister Carr's assessment without scientific or economic analysis. No, this decision of the federal government is based not on our best interests. This decision is divisive to the point it will challenge National unity....B.C. should not be part of a country that so blatantly ignores our province.