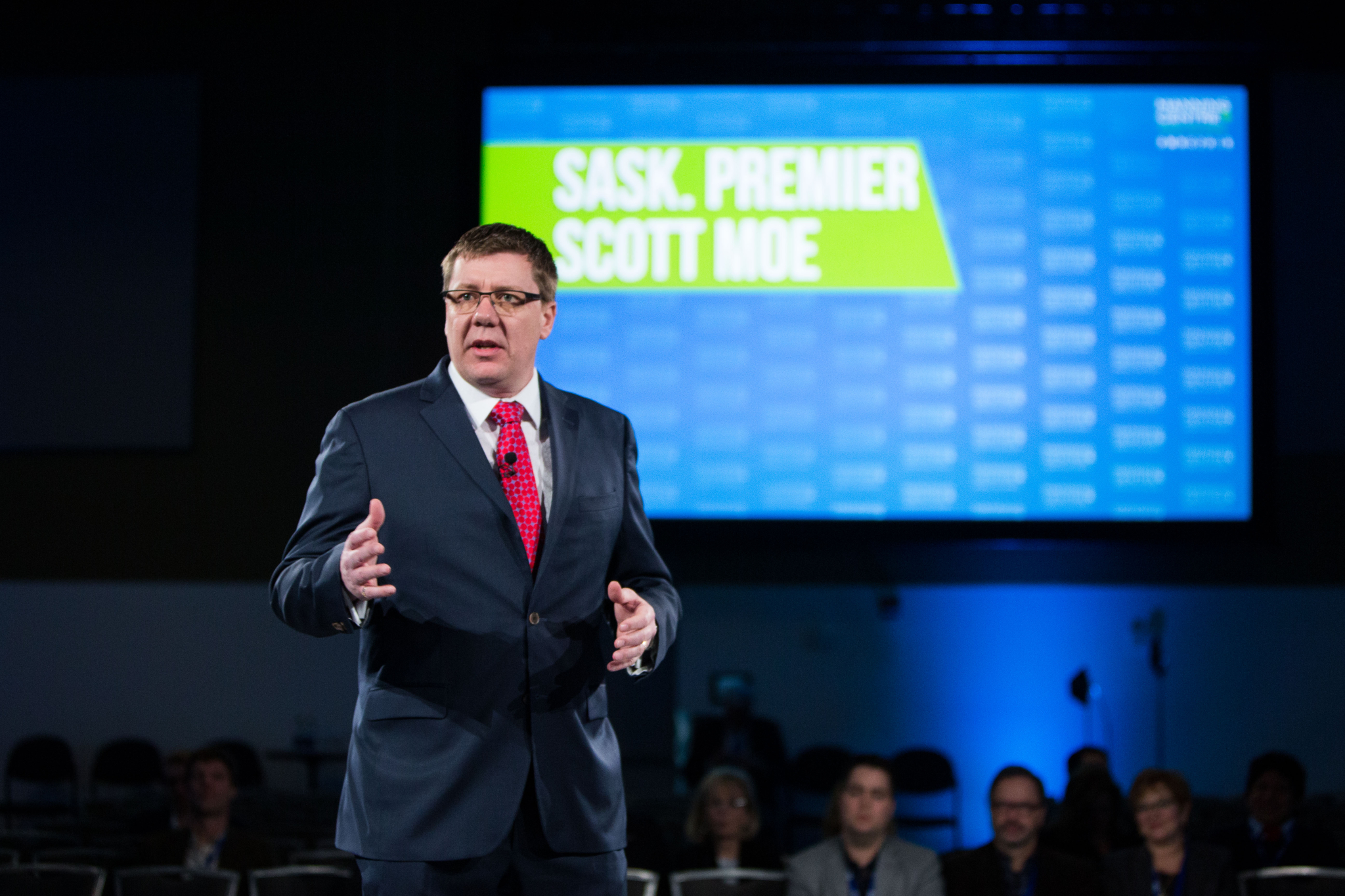 "Everyone will lose because of some flawed ideology," he told a receptive conservative audience at the Manning Networking Conference.

Moe said alternatives, such as Saskatchewan agriculture policies that reduce carbon pollution, should get more credit.

While he opposed the federal carbon tax, as did his predecessor Brad Wall, Moe also used his stage time to support Kinder Morgan's controversial Trans Mountain pipeline expansion — the current subject of a trade war between Alberta and British Columbia.

There are many ways to fight climate change, but the federal government's carbon tax simply isn't one of them, he said.

Moe pledged to uphold his party's resistance to the federal pollution pricing mechanism, while exploring other ways to contribute to global efforts to keep planetary warming below 2°C this century.

"The fact of the matter is, there is no jurisdiction in the world where a carbon tax has been introduced, where it has actually been responsible for reducing emissions in any way, shape or form," Moe said. "It's a flawed policy and it doesn't work, and it won't work in Saskatchewan."

Moe won the race to replace Wall as leader of the Saskatchewan Party in late January, and since then, has promised to maintain the political status quo. But that doesn't mean Saskatchewan is "backing away" from its responsibilities on climate, he explained on Friday — the province simply plans to go about it a little differently from the rest of Canada.

Saskatchewan has been a leader in climate action through its crop agricultural sector, said Moe, which is "more than carbon neutral on its own." Its farmers, for example, grow pulse crops that "fix their own nitrogen" and offset two million tonnes of climate-warming carbon annually.

"Everyone will lose because of some flawed ideology," said newly-minted Saskatchewan Premier Scott Moe of Justin Trudeau's carbon tax.

According to the Saskatchewan Soil Conservation Association, the prairie province's growers use zero till seeding methods that sequester 8.75 million new tonnes of carbon annually on more than 23 million acres of farmland. That's the equivalent, says its 2016 report, of taking 1.83 million cars off the road.

"That counts and that matters," said Moe, calling for "a little faith in science" as it develops clean, green technology that will push the climate conversation forward.

Moe said "everyone will lose because of some flawed ideology" if the federal government starts taxing everyday Canadians — and industry —for climate action, and good-paying jobs will go to other jurisdictions. The oil and gas operations, he added, will also move to countries with lax environmental and pollution standards.

While slamming the prime minister's carbon tax, he credited Justin Trudeau for sticking to his approval of Kinder Morgan's pipeline expansion in November 2016. He encouraged the Liberal leader to go "a step further" and direct its construction to actually happen.

Greenpeace senior energy strategist Keith Stewart says Moe's logic on the carbon tax only works if you don't consider the European Union to be a "jurisdiction in the world where a carbon tax has been introduced."

"The European Union has had a carbon tax for a long time and they have been reducing green house gas emissions," he told National Observer on Friday. "Any economist will tell you that if you put a price on carbon, you will get lower emissions than you otherwise would have."

If the carbon price is low, he added, it might not result in absolute reductions — but that's an argument for a higher carbon tax, not an argument that they don't respond to carbon taxes at all. Stewart did however, acknowledge Moe's concerns about the burden a carbon price would place on everyday Canadians.

"It's also important to give people tools to respond, particularly people on low income who have less ability to sort of make investments in housing, etc.," he explained. "But this is economics 101 and anyone who doesn't understand that when prices go up, demand goes down, really shouldn't be in charge of a provincial treasury."

Carbon taxes are currently in place in 14 European countries, including Finland, Norway, Denmark, Sweden, France, Ireland and Portugal. A European Union-funded research project surveying the impacts of carbon taxes introduced with revenue-neutral tax reforms in six of those countries found greenhouse gas emissions reductions of up to six per cent between the mid-1990’s to 2004.

By the end of 2018, each province and territory must have a system in place that prices carbon and meets minimum federal standards, or the government will implement one themselves on that region.

At the end of 2017, four provinces had a carbon price plan already in place: Alberta and B.C. Ontario and Quebec.