Are seniors being left out of Montreal's bid to make the city more 'age friendly'? 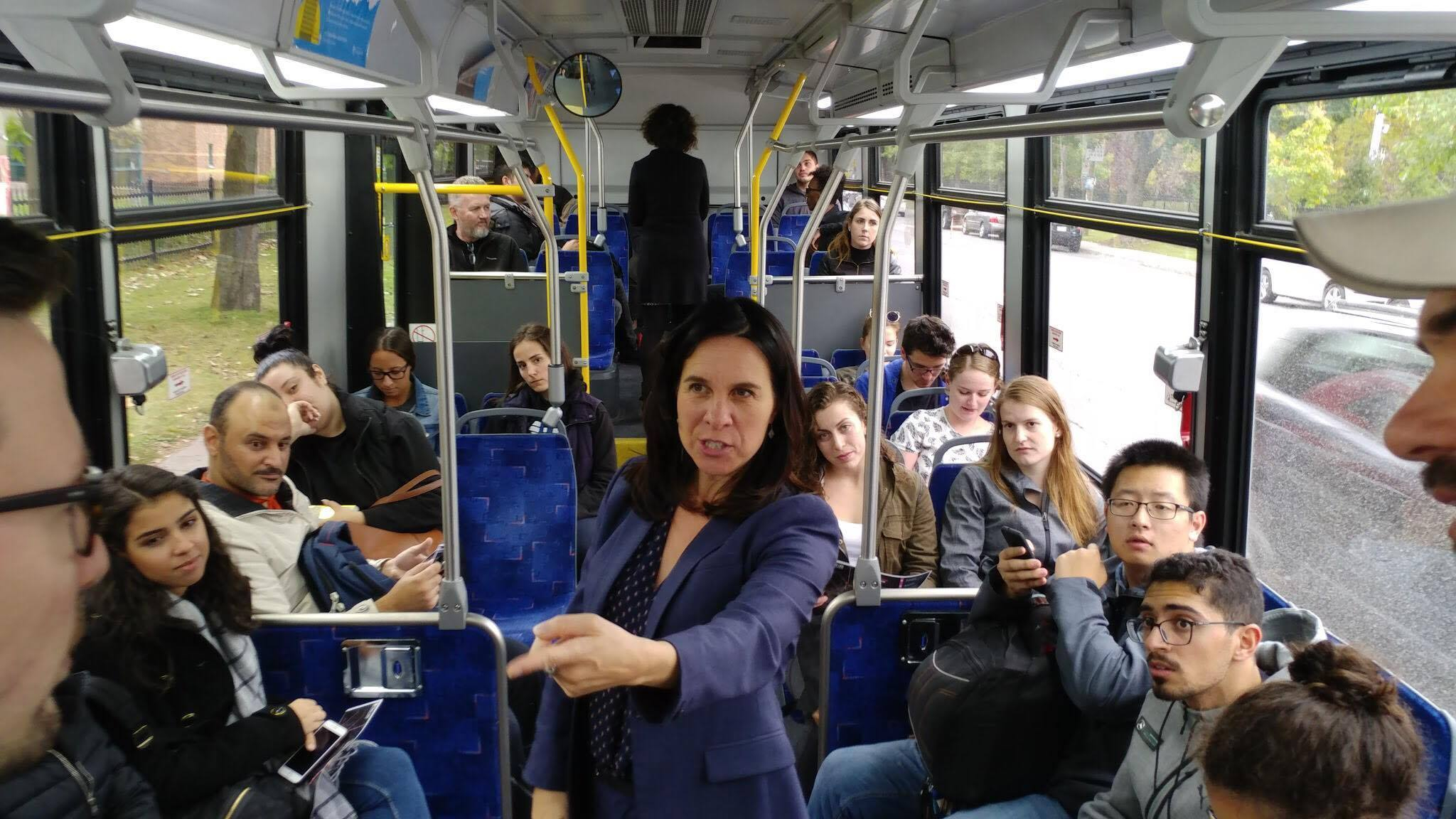 Montreal Mayor Valérie Plante campaigning on a city bus before the municipal election in 2017. Critics are calling on her administration to make consultations on an "age friendly" Montreal more accessible. Photo from Facebook
Previous story
Next story

If you were to hold consultations on how to best improve the quality of life and safety for a specific group of people, wouldn’t you do everything possible to ensure that members of that specific group would be present to provide their input? One would think so, right? Cue the City of Montreal.

The Valérie Plante administration’s recently announced decision to hold public consultations in the middle of winter, ahead of a new Municipal Action Plan for Seniors 2018-2020 that aims to make the city more “age friendly,” left members of two Concordia University-based research organizations scratching their heads.

In a bid to raise public awareness and gain the city’s attention on this issue, Ageing, Communication, Technologies (ACT) and the Centre for Research on Aging (engAGE) published an open letter to the Mayor of Montreal outlining their concerns and calling for immediate changes in order to build a better and more inclusive consultation process that would, in turn, lead to a better Action Plan.

According to them, the plan systematically excludes specific groups of seniors by “using unilingual online surveys, holding consultations during one of the coldest months of the year and choosing locations that are difficult to access with public transit. The people who are being excluded from the public consultation are precisely those who are most in need of an ‘age friendly city’”.

The first concern appears to be less of an issue, since the website clearly stipulates that if anyone needs help filling out the online survey (in either French or English) there’s both a phone number and an email address available. The other two concerns, however, could potentially be major obstacles to a truly inclusive consultation process.

First off, what able-bodied youngish bunch of bureaucrats at City Hall decided that holding a consultation process involving senior citizens in the middle of winter was a smart idea? There is nothing an older person fears more than a severe fall, which at their age can lead to serious complications and quickly turn into a life-or-death situation.

By all accounts, it’s been a tough winter for Montreal. The back-to-back snowstorms and the freezing rain left the city’s cleaning crews at times scrambling to keep up. Sidewalks were covered in ice for days and dangerously slippery, resulting in numerous spills and breaks. There is no reason to believe the rest of the winter will be any easier on us.

Not only is the timing all wrong, but the location of all four spots chosen for the consultations are hardly conducive for easy access. While three out of the four locations are near a metro station (one location requires an additional half-hour bus ride), none of the metro stations have elevators, making it impossible for seniors with disabilities to access them. If a senior intending to attend these consultations doesn’t have alternate transportation or the financial means to pay for a taxi, they are de facto excluded.

"We are really pleased that the city is engaging in consultations around this topic and we’re 100 per cent committed to making Montreal an age-friendly city, to make it more accessible and more inclusive, but it’s the process of consultation that we’re concerned with that’s excluding the people that are going to need this policy the most," says Shannon Hebblethwaite, director of engAGE, Concordia's centre for research on aging.

"I’m a younger person and I’m concerned about walking out on the sidewalks right now," she says. "Older people have told us that they’re not going to attend these meetings because it’s a dangerous time of year for them to be outside."

Hebblethwaite refers to this badly planned consultation process as the “illusion of inclusion.”

According to a document produced by the Montréal Steering Committee on Seniors (MSCS), known as the Table de Concertation des aînés de l’île de Montréal (TCAÎM) in French. More than 101,000 seniors (40 per cent) declare at least one disability that impacts the amount and type of activities they can engage in (such as difficulty seeing, hearing, communicating, walking, bending down or other similar activities). Slightly more than 44,200 live with a disability so significant that they receive home-support services from healthcare network affiliated establishments.

Statistics Canada 2011 figures reveal that nearly 300,000 seniors 65 years of age and older reside on the island of Montreal, which represents 15.6 per cent of the total population. It is expected that by 2026 that number will be 21 per cent. One out of five seniors live below the poverty line, and a large majority live alone.

"Even the city’s back-up plan, asking seniors to go online and fill out an online survey, excludes older people who don’t know how to use the computer or can’t financially afford a computer or an internet connection. It excludes the most marginalized of our older people who have lower incomes," says Hebblethwaite.

The two organizations, ACT and engAGE, want to see the city extend the consultations into the spring, which would allow more people to be involved. They would like to have at least one consultation in the west end of the city, where a large anglophone and immigrant population resides; ideally one meeting in English, and they hope to see the city connect better with the many organizations working with seniors.

“Seniors need to find out about these consultations through community organizations,” says Hebblethwaite. “If the information is only available online on the city’s website, that again attracts a younger, more able population. We’d like for the city to learn from this process so the next time that it happens they can be more inclusive.”

Like all-male panels discussing sexism or all-white panels discussing racism, a senior panel that would feature only the most able-bodied and active members of that community is simply not true representation. In this particular case, the ones hardest to reach are the ones most in need of being consulted on accessibility issues.

Is Montreal an age-friendly city?

The Concordia researcher does not believe that Montreal is particularly age friendly.

"Sidewalks aren’t particularly accessible," she says. "They’re broken, they’re cracked, they don’t have good curb cuts, we have eliminated benches for fear of the homeless occupying them. We don’t have environments and spaces that are accessible and easy to navigate with a wheelchair, a cane, or a walker. Our metro stations lack elevators and we often hear stories of STM bus drivers lacking patience in dealing with seniors who need a ramp."

In 2016, the City of Montreal announced it would be spending $213 million to add 14 more elevators to Montreal metro stations by 2022. These are in addition to the 10 already currently underway. When work is completed the Montreal metro system will have 31 accessible stations out of a total of 68, which isn’t great, but it’s a whole lot better than the current 10 in existence.

Language is also an issue for Hebblethwaite.

"English-speaking seniors are even more excluded because many of their children left the province in the '90s and so many don't have family and social support here."

A 2006 report by the Office of the Commissioner of Official Languages, concluding that English-speaking seniors in Montreal are at a higher risk of isolation than those who are French-speaking, corroborates that.

Additional dates in the works?

Reached by the Montreal Gazette, the executive committee member responsible for seniors’ issues, Rosannie Filato, said that consultation dates “cannot be moved at this point because all the community groups are getting ready for these dates and the new action plan is slated to be adopted at city council in May.”

To the city’s credit, since the complaints surfaced, Montreal councillor Peter McQueen announced that an English consultation meeting has been added at the Cummings Centre in the NDG-CDN borough on Feb. 26, assuaging one of the concerns. However, no announcement about additional dates has been made. While it’s understandable that the consultation dates cannot be moved, there is no reason why additional ones can’t be added in March and April, allowing more seniors to participate.

“This all goes beyond physical accessibility,” explains Dr. Hebblethwaite. “It’s also about social inclusion. The fact that people are ignoring seniors' opinions and being ageist, even in a non-malicious fashion, in how they approach these consultations is just one example of these negative stereotypes of aging and stigma. If people can’t physically get out into their communities, they lose that social contact, which we know is so vital for well-being among older people as they age.”