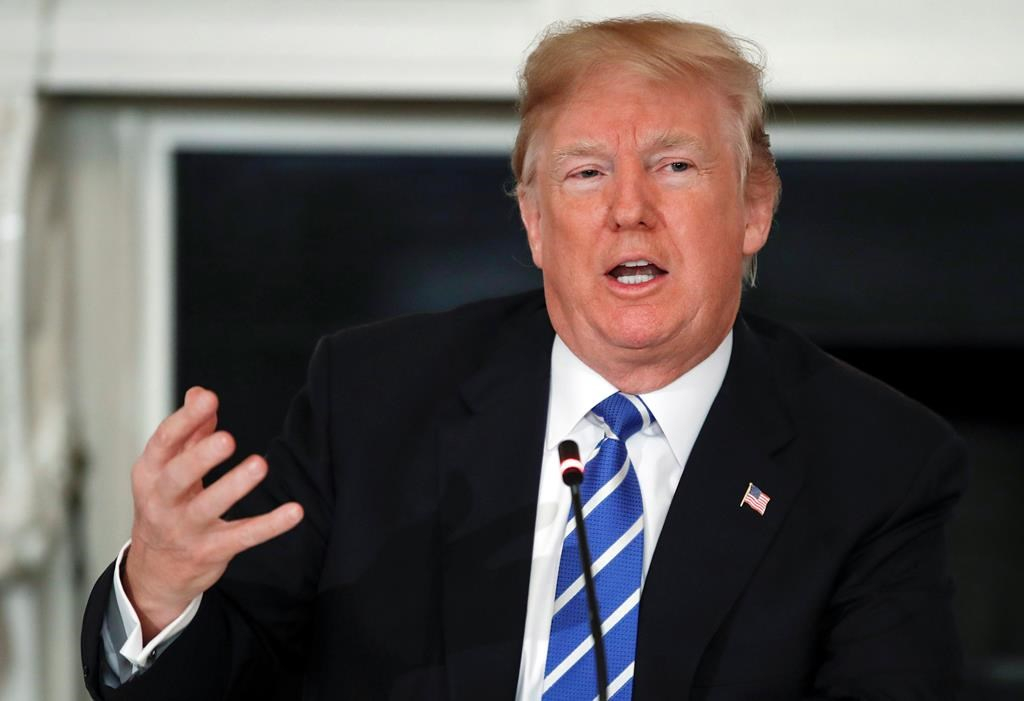 On a day that epitomized a suspenseful era in American trade policy, the U.S. played down a presidential threat to impose a border tax, but raised the notion of upcoming Buy American provisions, slapped duties on Canadian pipes and invited the world to witness its internal tug-of-war over economic visions.

The star of this economic-reality show: President Donald Trump.

The former TV host allowed cameras to record for nearly an hour as he went back-and-forth with aides and federal lawmakers in a sparring match over the future of the global economy, of the sort normally held behind closed doors.

In Tuesday's edition of "Survivor: U.S. trade policy," one idea appeared to get voted off the island. A senior White House official played down Trump's earlier talk about some ill-defined import tax that left veteran trade-watchers perplexed about how it could work — or even be legal.

''There is nothing formal in the works right now,'' said the official, who was not authorized to discuss the matter publicly and so spoke on condition of anonymity. ''He was simply reiterating the same sentiments he's been saying about reciprocal trade for years.''

Those sentiments were certainly on display Tuesday.

Wilbur Ross, Trump's commerce secretary, boasted about the 81 per cent increase in trade retaliations since his inauguration — and did so as the U.S. launched an investigation that could lead to more than 50 per cent in duties on wide-diameter welded pipe from Canada, of the sort used in oil and gas pipelines.

That dispute will play out into the fall. It started with a request from the American pipe industry, following a similar procedure that has resulted in duties on softwood lumber, newsprint and Bombardier planes — although the plane duties have been overturned by a U.S. tribunal.

Again and again, members of Congress attempted to rein in his more protectionist impulses. They expressed support for the president's get-tough attitude but raised different concerns about the impact tariffs might have on the economy, such as higher prices.

The president was undeterred.

He sounded unpersuaded by the argument that tariffs ultimately get passed down to consumers through higher prices, so people buy less, economic activity slows down, and ultimately the number of people hurt exceeds the number of workers helped in protected industries.

He shrugged off a warning from Roy Blunt of Missouri that he'd be courting a trade war. To Mike Lee of Texas, he shrugged off the idea that tariff costs will get passed to consumers: ''A lot of companies will eat it,'' Trump said.

Okay, he conceded, maybe costs will get passed down to consumers, but, Trump said, it's worth it: ''You may have a higher price, but you have jobs.''

Republican Sen. Lamar Alexander shared the cautionary tale of steel tariffs under George W. Bush — he said auto-parts companies and manufacturers lost jobs, because 10 times more people use steel in the U.S. than actually make it.

The U.S. is now contemplating a range of punitive actions on foreign-made steel, primarily from China. One thing it will also be weighing soon is the prospect of including a Buy American provision in a massive, $1.5-trillion infrastructure bill Trump wants.

A Democratic senator urged a Buy American provision in that bill for steel. ''(It) ought to be a no-brainer,'' said Ron Wyden of Oregon. Trump nodded vigorously at the idea of Buy American language.

Trump took some jabs at Canada.

He said Canada has treated his country unfairly on lumber and dairy policy, which he said had hurt the state of Wisconsin. The Republican senator for Wisconsin interjected to defend the northern neighbour.

''We ought to be very cautious,'' said Ron Johnson. ''Wisconsin operates a trade surplus with both Canada and Mexico... Trade works very well for Wisconsin.''

Left unresolved is the greatest cliffhanger of all issues in Canada-U.S. trade policy: NAFTA. It's still unclear whether Trump might start withdrawing from the agreement to pressure Canada and Mexico into a quick deal.

In other, private versions of the meeting broadcast Tuesday, the president is being repeatedly urged to leave that option alone.

Trump's trade czar Robert Lighthizer weighed in with a status report on the negotiations. He said they're advancing — but made clear his greater frustration with the Canadian negotiating team.

''I think we’re making progress,'' Lighthizer said. ''Particularly in regard to the Mexicans.''

Brian DePratto, a senior economist at TD, says it's challenging these days following U.S. trade news. He said it's important to disentangle what's real, like punitive duties, versus what's rhetoric — like the border tax idea.

''It certainly makes for a more interesting job,'' he said.

''It's always important to step back a little bit and try to separate the rhetoric from the action. Allowing a little time for things to settle is definitely important."

Stay tuned for the next episode: the upcoming round of NAFTA negotiations starts Feb. 26.