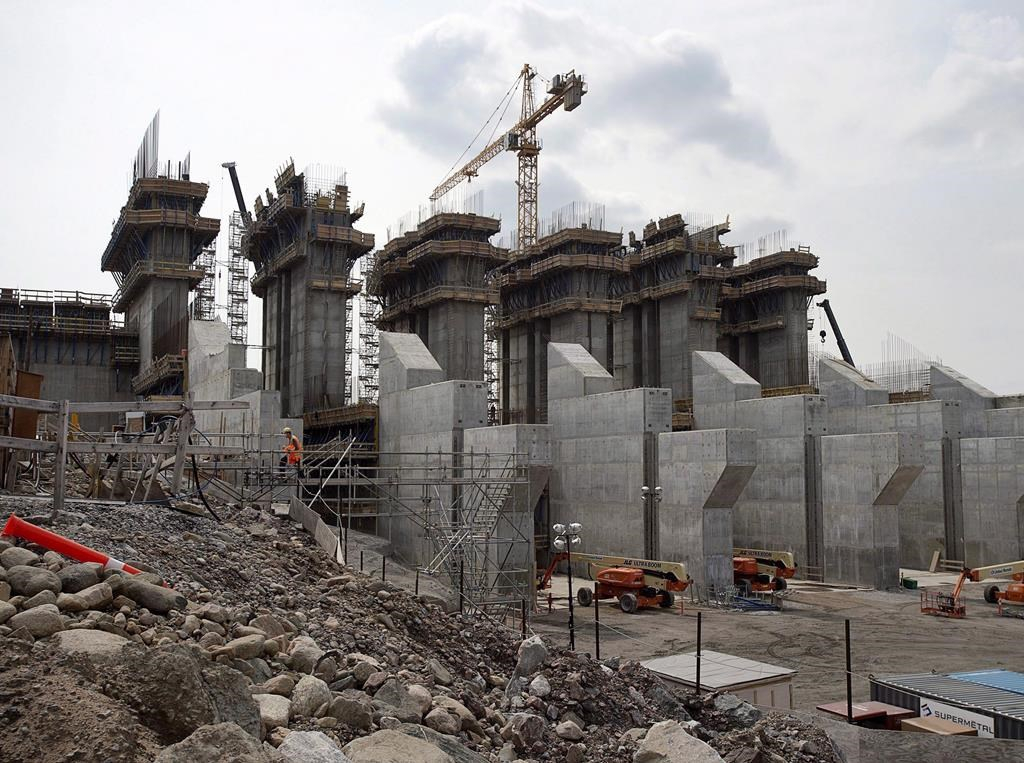 The construction site of the hydroelectric facility at Muskrat Falls in Newfoundland and Labrador is seen on Tues. July 14, 2015. File photo by The Canadian Press/Andrew Vaughan
Previous story
Next story

Roberta Frampton Benefiel lives downstream from the massive Muskrat Falls hydro project in Labrador. And, she's among many in the area taking no comfort from official assurances that a recent landslide nearby poses no risk of a major dam failure.

Moving is not an option.

"I couldn't afford to get out of here," she said from her home in Terrington Basin not far down the Churchill River from the almost $13-billion development. The cabin she has worked on since 1992 is in a recognized flood zone.

"I'd just have to clean out the house and keep on trucking," she said. "But for Mud Lake, that's life and death."

Crown corporation Nalcor Energy is trying to calm residents after the landslide earlier this month stirred what citizens' groups say is chronic fear and "anguish." They are especially worried after dozens of people living in Mud Lake, closer to Muskrat Falls, had to be airlifted to safety last May as sudden flooding swamped homes in the 200-year-old community.

Longtime residents said they'd never seen anything like it. They said the only thing different was that water levels were being manipulated at Muskrat Falls. An independent review of the incident, however, did not blame Nalcor or the project.

Still, residents say the landslide raises fresh questions about the stability of the North Spur dam, a crucial element of the Muskrat Falls design.

Nalcor says landslides in the region are fairly common and this one was downstream from the North Spur — a jut of sand and clay that was reinforced as part of the dam.

"The North Spur dam is a critical piece of infrastructure within the Muskrat Falls reservoir and significant work was completed to strengthen and protect this area," Nalcor said in a public update.

"The safety of the people and the communities in which we operate is our priority."

Premier Dwight Ball's office also said the well-being of residents "is the primary concern of this government" and that water management staff are now assessing the landslide.

Those actions stop short of what groups such as Grand Riverkeeper Labrador and the Labrador Land Protectors say is needed. They have called since May 2017 for an independent review of the North Spur, including a request signed by more than a thousand residents living downstream from Muskrat Falls.

"Still, to date, Premier Dwight Ball has given absolutely no response to this reasonable request," the groups said in a joint statement.

Others raising concerns include David Vardy, a former chairman of the provincial Public Utilities Board, who was a public servant for almost 30 years. He has repeatedly called for an independent review of what he believes is a lack of geotechnical evidence that potentially sensitive clays underlying the North Spur can withstand the pressure of higher reservoir levels.

Nalcor says water levels are now at 23 metres and will remain so for the rest of the winter. The plan is to ultimately raise the reservoir to 39 metres.

Nalcor insists it has made the North Spur safe.

"We've installed instruments and equipment within the Muskrat Falls dam structures to constantly monitor the facilities for movement, water pressure, water flow and seepage, temperature and any movements in slopes or foundations," it said.

But there are other issues raised by international researchers that, for some, cast more doubt on the reliability of the North Spur.

Scientists Stig Bernander and Lennart Elfgren of Lulea University of Technology in Sweden have questioned whether Nalcor and its engineers have properly tested soils for possible risk and whether drainage is adequate.

"That's very, very concerning," said Benefiel. "Before they fill that reservoir, I would like to see some really independent folks come in and take a hard look at this — people that we can sit with and discuss what they find."