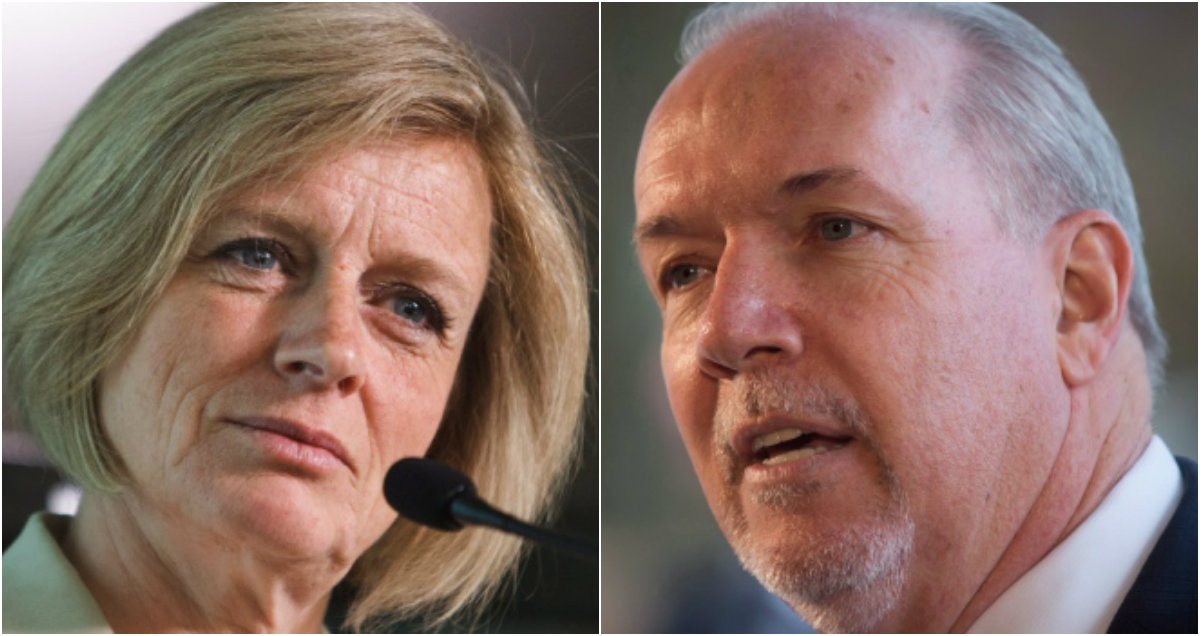 British Columbia and Alberta are perfectly poised to lead Canada’s transition to a more sustainable form of energy security and prosperity. Instead they have created a level of hostility and resentment I don’t think we’ve ever seen between the two provinces. It’s all fire and fury as threats of lawsuits are tossed over the Rockies into B.C., along with a boycott of B.C. wine and swearing off vacations here. All this for the B.C. government raising concerns over what could happen if a pipeline or tanker transporting hazardous materials ruptures and threatens thousands of jobs and entire industries.

The war cries centre on how our respective provinces can hurt one another, B.C. by defending its environment and economy, which purportedly puts Alberta jobs at risk, and Alberta by attacking B.C. industries, which definitely puts B.C. jobs at risk. With Alberta’s provincial election roughly a year away, this seems less like true leadership and more like unhinged desperation. There are other more constructive conversations we could be having. So let me sing some of Alberta’s praises for a moment.

Alberta is proud of its energy sector, the prosperity it has created in that province, the identity of the province as a hard-working, hard-playing, intrepid and entrepreneurial place where people aren’t afraid to get their hands dirty.

My family roots are there and many friends and family work in the oil patch. I don’t oppose Kinder Morgan’s Trans Mountain pipeline twinning because I have some ill will towards my own friends and family or Alberta in general. I oppose it because I have a moral obligation, and collectively we have an ethical obligation, to stand up for the interests of our respective communities and our provinces in order to protect what generates our own prosperity and sustains our quality of life. What self-respecting community, city or province wouldn’t do this?

Yet we are cast as ungrateful and maladjusted, bad partners in confederation, hypocrites unworthy of the gas in our cars and electricity in our homes for our concerns about B.C. taking on all the risk, and none of the reward, of a Texas-owned pipeline exporting toxic sand speckled tar to China. To Alberta Premier Rachel Notley we seem to be little more than a place to plough through. We have too much self-respect and pride of our own to simply put up with that kind of treatment.

So here we have two proud provinces, looking out for their own self-interest, recognizing their own economic strengths and what differentiates them. The two could not be any more different. Enter a prime minister, Justin Trudeau, who has said this thing will get built, taking a "You’ll eat it B.C., you’ll eat it and you’ll like it" approach. But ‘the national interest’ shouldn’t be a zero-sum showdown where one province gets what it wants and another gets what it dreads. How on earth is that nation-building?

My province doesn’t want to hold Alberta hostage, destroy its jobs, or take away its prosperity. So just stop with all of that. It’s nonsense. We know Alberta’s prosperity factors into our tourism economy, our wine sales, our housing sales, and our overall consumer market. Between Alberta and British Columbia we have world-leading post-secondary institutions and a supremely talented workforce, despite shortages of skilled labour in some sectors. A quarter of all Canada’s clean tech companies are in Vancouver, and the technical knowledge in both provinces’ private sector is globally recognized. We are smart, really smart, and hard working, and already have considerable financial resources to draw on from government, venture capital, and banks and credit unions. We need to work together on what we agree on instead of going toe-to-toe for an American pipeline company in an all-or-nothing battle. We can and should be doing so much better than this.

I’ll meet Notley and Trudeau halfway and concede that blocking the project at the expense of Alberta jobs isn’t acting in the national interest when they respect that it's not in the national interest either to force Kinder Morgan through at the risk of jobs and communities in British Columbia – let alone a safe and habitable coastline and planet for ourselves and our children in the century ahead.

In contrast, Washington Gov. Jay Inslee spoke enthusiastically about partnership and building prosperity together when he visited our provincial legislature in Victoria just a few months ago. That seems like the kind of neighbour we can work with, and one with the fastest-growing economy of any U.S. state. It’s good to remember that we still have some neighbours who see our strengths for what they are and who want to build on those strengths together, not simply build over them. I hope Notley and the rest of Alberta can take a step back for a moment and really consider what a more constructive dialogue might look like, if in fact this really is about jobs, provincial prosperity and nation building. Together we have all the pieces of a sustainable prosperity puzzle; divided all we have is a future of risk and resentment. So let’s please change the conversation.

British Columbians want Albertans to have jobs and we want them to buy our wine. Let's maybe just start there.

Nova Scotia premier weighs in on wine war between B.C. and Alberta