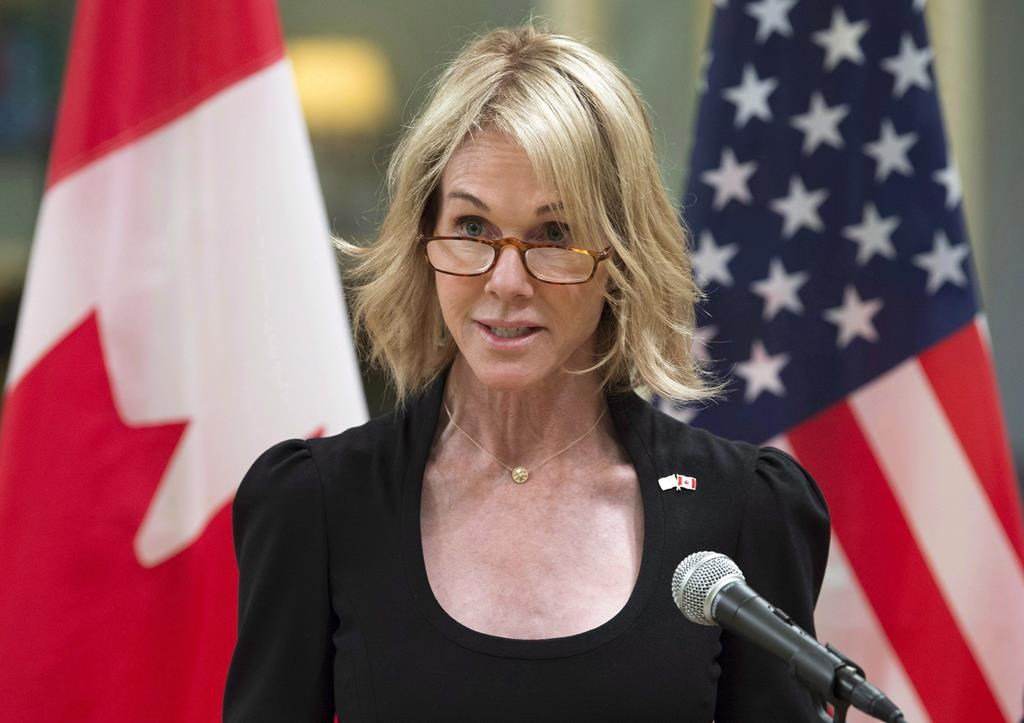 United States Ambassador Kelly Knight Craft delivers a brief statement after presenting her credentials during a ceremony at Rideau Hall on Monday, October 23, 2017 in Ottawa. File photo by The Canadian Press/Adrian Wyld
Previous story
Next story

Kelly Craft wants Canadians to know a few things about one of the least popular presidents an American ambassador has ever had to represent in this country.

Among them: He's taking the United States in a new direction, but that doesn't mean navigating away from its good friend, Canada; He's got way more in common with Justin Trudeau than you would think; He wakes each day seized with helping the working class people who elected him, but he could do a better job of explaining how he plans to do that.

In a recent Ottawa speech, the Kentucky-born, basketball-loving U.S. ambassador to Canada presented those insights — some more candid than others — to decode President Donald Trump for bewildered and curious Canadians.

Six months into her job, Craft is determined to put a more cheerful face on what many see as an ugly administration.

It's Craft's attempt to smooth her president's rough edges, like a shot of finely aged bourbon from her beloved state.

"I want to explain why our president — with a clear mandate from the people across the United States — saw a need for sweeping change. Responding to this mandate doesn't weaken our alliance," Craft said in a speech earlier this week to a gala dinner at the Canadian War Museum.

"I expect that some here who hear the slogan, 'Make America Great Again' are concerned about our country's engagement in the world. I'm here to tell you that yes, the president will put America first, just as Canada will put Canada first. However, America (First) does not mean America Alone."

The speech was well received by the several hundred at the annual Macdonald-Laurier Institute event, and it broke new ground beyond her previous, carefully scripted public appearances.

She said she understands why so many Canadians "are weighing American actions through a Canadian prism."

"But sometimes it's useful to look at all sides. This too becomes a challenge with today's competitive 24-hour news cycle. It is often difficult to discern what is current or old, real or fake, what is reporting versus advocacy," she said.

The Canada-U.S. relationship may be complex, and that includes the ongoing renegotiation of NAFTA, but Craft said it is as vibrant as ever "even when the signals coming from the media and thought leaders often suggest otherwise."

In her view, one of the biggest reasons for optimism is the relationship between Trudeau and Trump, both of whom are "strong-willed and charismatic."

Both leaders delivered similar messages at last month's World Economic Forum in Davos, Switzerland, about the need to extend economic prosperity to those who have been passed over, she said.

Craft quoted Trudeau in Davos: "Over the past decades, citizens and workers have been calling for change. But too often their pleas have been ignored … We all know that to be competitive in this modern economy change is imperative. And the grassroots desire for change is there, it always has been, but it's up to us to flip on the switch."

Then she delivered her punchline:

"I can't think of a better way to describe the wave that elected Donald Trump."

Mark Fisher, the president of the Toronto-based Council of the Great Lakes Region, listened with interest to her speech, and said it had all the hallmarks of an ambassador attempting to provide reassurance about a White House that is unorthodox and chaotic.

He predicted she will grow into the role as her predecessors have, but it won't be easy with musings about retaliatory trade action periodically coming out of the White House.

"At some point, we're going to have to sit down and say, 'are we really on the same page here' because the reassurances don't seem to be lining up with what we're hearing out of Washington?"

Craft herself acknowledged that figuring out Trump is not an easy thing to do — even for her.

But for any of the confusion he might create, she insisted that underneath it is a committed champion of working people who thinks like a businessman focused on getting results for them.

"I don't think that he is very good at expressing how we're going to achieve those results. I think that would be very helpful if he laid that out for all of us," she said, drawing laughter from the audience.

"It's about the people who voted him into office … and every day when he gets up, he will say, 'I want to make America great again for those people, the middle class.'"