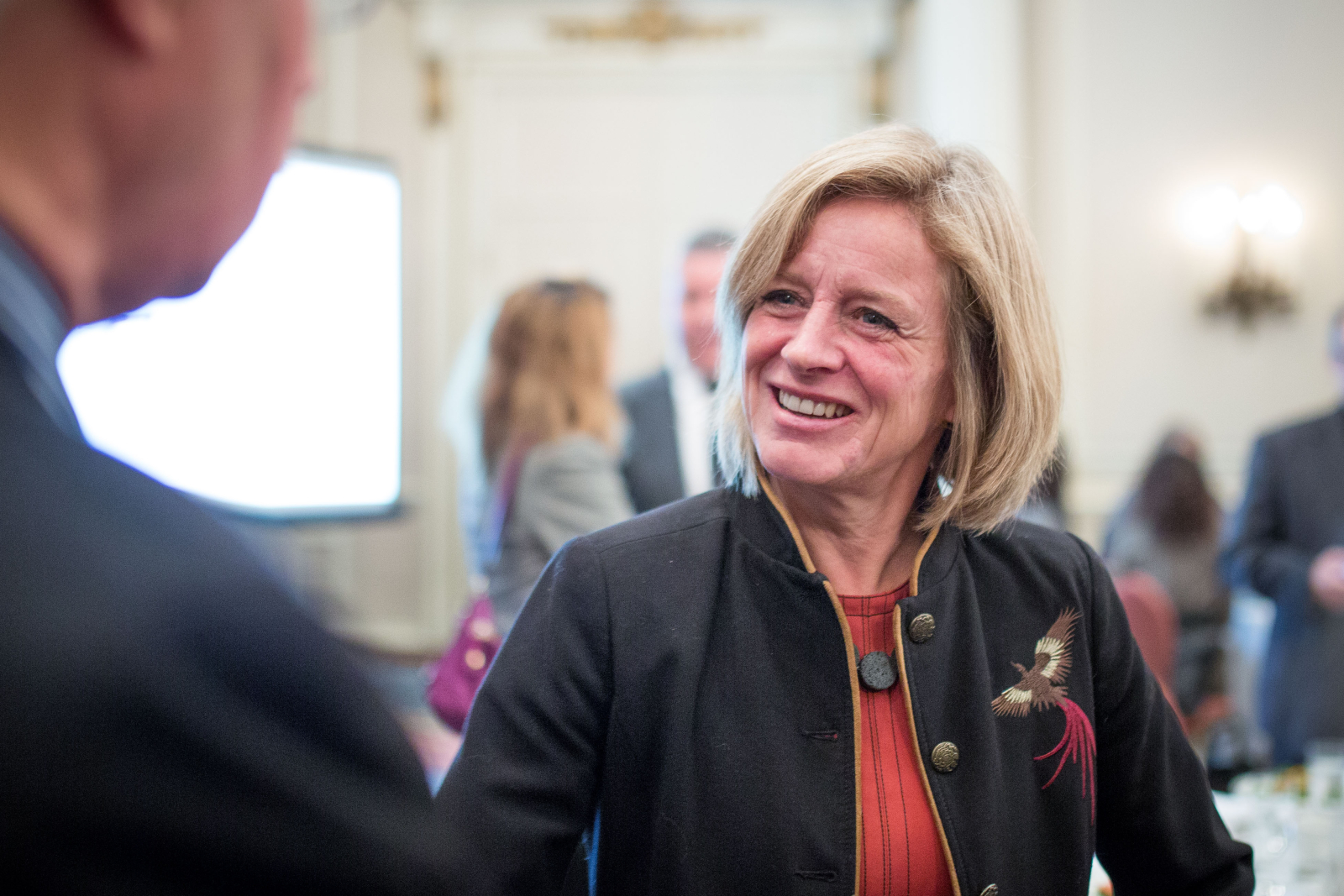 Notley's comments came after Horgan released a statement that said his government would pursue consultations on four different measures to deal with the threat of spills of bitumen, the tar-like heavy oil that would be shipped from Alberta to the B.C. coast on the pipeline expansion project. He also said his government would take the matter to court before acting, but appeared to drop a previous threat to restrict any increase in bitumen shipments in the absence of more scientific research.

His announcement was interpreted by Notley as a concession.

"I think it is fair to say that in a small way today B.C. blinked," Notley said. "B.C. is stepping back from the brink and abiding by the law, and this is a good thing."

If built, Kinder Morgan's project would triple the capacity of its existing Trans Mountain pipeline, shipping up to 890,000 barrels of oil per day. The project would also multiply the number of oil tankers on the coast by a factor of seven.

“We believe it is our right to take appropriate measures to protect our environment, economy and our coast from the drastic consequence of a diluted bitumen spill,” Horgan said in the statement. “And we are prepared to confirm that right in the courts.”

The statement said that it would take several weeks before the province brings the case forward in the courts.

Horgan's latest comments come a week after Prime Minister Justin Trudeau accused the B.C. premier in an interview with National Observer of trying to "scuttle" Canada's national climate change plan by blocking the Texas company's pipeline project. Trudeau said in the interview that the pipeline was key to getting Alberta to contribute to meeting Canada's climate change goals.

The prime minister also said, in the same interview, that he was prepared to impose a national price on carbon on any province that doesn't introduce its own measures to make polluters pay.

However, B.C. demands are backed up by American and Canadian scientists who have warned that there are significant gaps and uncertainties in the science related to how to clean up a bitumen spill in water. Environment and Climate Change Canada also made this argument in its final submission in January 2016 to the National Energy Board. The NEB, a Calgary-based federal regulator, reviewed the project and recommended its approval with 157 conditions. Despite concerns raised by First Nations and the scientists, Trudeau accepted the NEB's recommendations and approved the project in November 2016.

Horgan had previously described Notley's ban on imports of B.C. wines as disproportionate and unlawful.

“The actions by the Alberta government threaten an entire industry and the livelihoods of people who depend on it,” said Horgan. “We have taken steps to protect our wine industry from the unwarranted trade action by the Government of Alberta.

“It’s not about politics. It’s not about trade. It’s about British Columbians’ right to have their voices heard on this critical issue,” said Horgan. “And it’s about B.C.’s right to defend itself against actions that may threaten our people, our province and our future.”

The Trudeau government introduced a $1.5 billion plan to be spent over five years to protect Canada's oceans as part of its response to concerns about potential spills.

It hasn't yet provided full details of how this money will be spent.

Editor's note: This article was updated at 7:10 p.m. ET on Feb. 22, 2018 with additional information about a change in B.C.'s previously announced measures. It was updated again at 7:53 p.m. ET with comments from Premier Rachel Notley.

Typically, the dangers to

Typically, the dangers to Albertans of expanded oil sands and fracking activities are not even a part of the discussion. The Alberta Government has recently granted 10 year water licenses for fracking, without any stipulation as to where the companies will get the water from. At the same time, it is trying to take away water licenses from farmers and ranchers who have been dependent on this water for 100 years. Who cares about food production? We'll just eat money and drink oil.

The Trudeau govt. had good

The Trudeau govt. had good information from multiple science backed sources that Dilbit/bitumen has not been studied sufficiently to in anyway say a 'World Class Dilbit spill into the Salish Sea can be cleaned up. Spill response times, response times in geographic regions, compensation for damages, and new regulations related to marine spills are not the central issue here. These four concerns are irrelevant if dilbit and the condensate it is mixed with to make the bitumen flow, sinks. Even regular types of crude oil can not be sufficiently cleaned up.Exon Valdez comes to mind.The columnist Margaret Wente speculates in a recent article that we don't really know if there is a significant chance of a major tanker dilbit spill in the Salish Sea or Port Vancouver. Is the chance 1 in thousands she speculates....as if this makes an Aframax tanker a day passing through the dangerous waters of Haro Strait acceptable. Her speculation does not diminish the real risks at all. Is a tanker spill with modern state of the art guidance systems possible? Well, we have the double hulled tanker with state of the art navigational systems, colliding Jan. 6th this year with another ship in the South China Sea, catching fire, exploding sinking spilling 960,000 barrels of condensate....human error suspected....the navigational aids turned off, we have the Queen of the North in the B.C. ferry fleet, going aground and sinking March 2006....again suspected human error. Several studies on possible massive tanker/dilbit spills in our waters have been done ( A tanker with oil from the Kinder Morgan pipeline plies the waters off ...Vancouver

https://www.theglobeandmail.com/.../british-columbia/...bc-waters...oil.......
May 19, 2017 - The Concerned Professional Engineers, a group with expertise in the design, construction, and operation of the systems for moving marine goods such as oil, said even using Kinder Morgan's data translates into a 10-per-cent chance of a 8.25 million-litre heavy oil spill over the project's operating life. This catastrophic spill scenario has a very big brother, a real boogeyman here and that is climate change. Another discussion. Quite likely the end game for the world as we know it. Exaggeration? I think not!

If the science around

If the science around cleaning up dilbit spills is not there, it doesn't matter how much money the federal government is willing to spend on protecting Canada's oceans. Compensation for damages and spill response times are not relevant if proper clean-up after a spill is not possible.

Particularly when you consider that 1 1/2 billion over 5 years is a pitiful small amount to protect the extent of our coastline....or is this sum just for the benefit of the Vancouver Harbour?

Forgotten in the discussions

Forgotten in the discussions of oil spill response is that the best achievable recovery in case of a spill in the sea is only about 30% - and that's with light crude. Dilbit will be much harder to recover and is bound to be an ecological disaster, no matter how much money is spent on response.

Trudeau it seems in the

Think a Big oil tank farm on Burnaby Mountain with the biggest population of BC.
Living At the Bottom of the Hill does Rufugee come to mind