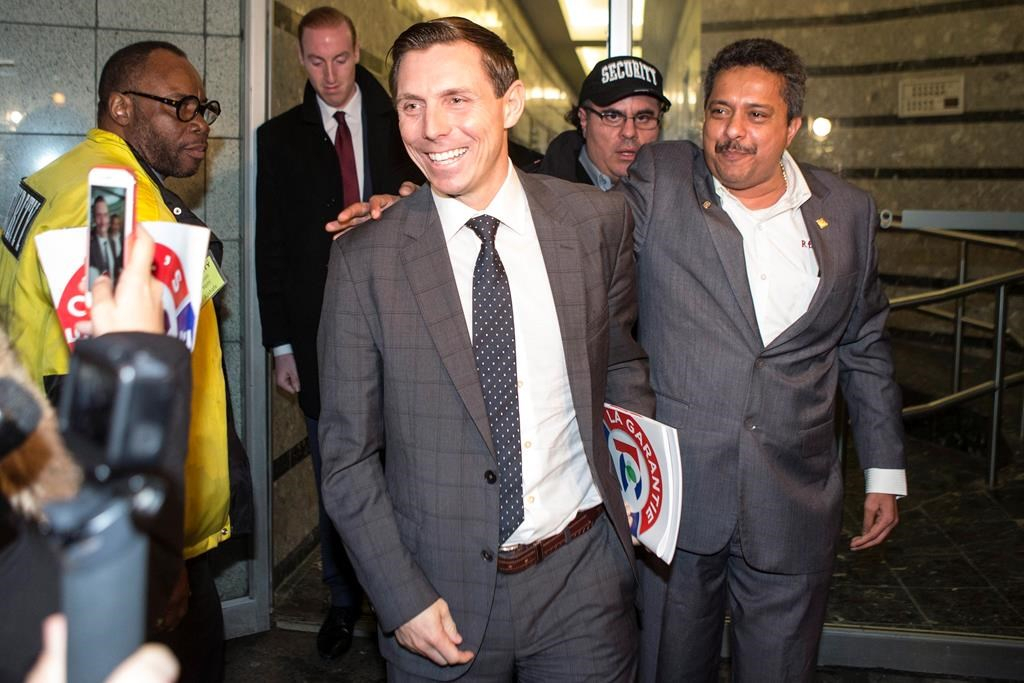 Patrick Brown’s quest to regain the leadership of Ontario’s Progressive Conservatives cleared a key hurdle Wednesday when the 39−year−old politician, who resigned amid sexual misconduct allegations, received the party’s stamp of approval for a run in the spring election.

A party nomination committee tasked with vetting all Tory leadership candidates announced that Brown and three others vying for his former job — Christine Elliott, Doug Ford and Tanya Granic Allen — had been approved for the contest. Caroline Mulroney, another leadership hopeful, had already been approved by the committee.

Brown thanked his supporters Wednesday and vowed not to let them down in a statement posted on social media after the party’s decision was announced.

"This is about a movement to get Ontario back on track," Brown said on Twitter. "I want to finish the job that we started. The People’s Guarantee (election platform) is our path to victory and ... I am the only candidate in this race that stands behind our plan."

Progressive Conservative members will start voting for the new leader on March 2, with the winner to be announced March 10.

"The debate will be fascinating," he said. "It will be interesting to see how (the other candidates) treat him."

In this political environment, Jacek said, Brown still has a chance to win the race.

"We have to think that a lot of those people on the membership list joined up for the party to vote for him," Jacek said. "They still may be there and most of them may still be loyal to him."

Brown’s departure as party leader and his subsequent bid to reclaim the post have plunged the Progressive Conservatives, who had been leading in the polls, into turmoil.

The Barrie, Ont., politician abruptly resigned as leader on Jan. 25 after CTV News reported allegations of sexual misconduct against him he has emphatically called false. The Canadian Press has not independently verified the allegations.

Brown has also been dogged by allegations of mismanagement and corruption, which have led one Tory legislator to file a complaint with Ontario’s integrity commissioner.

He has further been accused of exaggerating membership numbers after an internal audit found the party has about 67,000 fewer members than the 200,000 Brown had previously taken credit for.

He was also expelled from the party caucus by interim Tory leader Vic Fedeli on Friday, just hours before Brown announced he would seek to reclaim the leadership.

Brown has denied all the allegations against him and vowed last week to continue to fight to clear his name.

Meanwhile, some of his competitors in the leadership race said they were focused on their own campaigns.

Ford, who had criticized Brown’s decision to step into the leadership competition, said he wasn’t concerned that the controversy surrounding Brown will drown out the other candidates and their ideas

"I’m zeroed in and zoned in on Kathleen Wynne," Ford said in an interview Wednesday. "I’m zoned in on becoming the premier of this province and changing it and making sure we start respecting the taxpayer."

The former Toronto city councillor also said he will continue to highlight how he differs politically from Brown.

"If they want Liberal−lite, if they want someone that believes in the carbon tax that is going to kill businesses ... if they want to continue on with the sex ed curriculum and they want to be taxed to death, well, he’s your guy," Ford said.

Elliott issued a statement on the committee’s decision that did not mention Brown.

"Now is the time for our party to move forward," she said. "I remain the only candidate in this race with the ability to unite our members, and the experience to win the next election."

Mulroney and Granic Allen were not immediately available to comment.