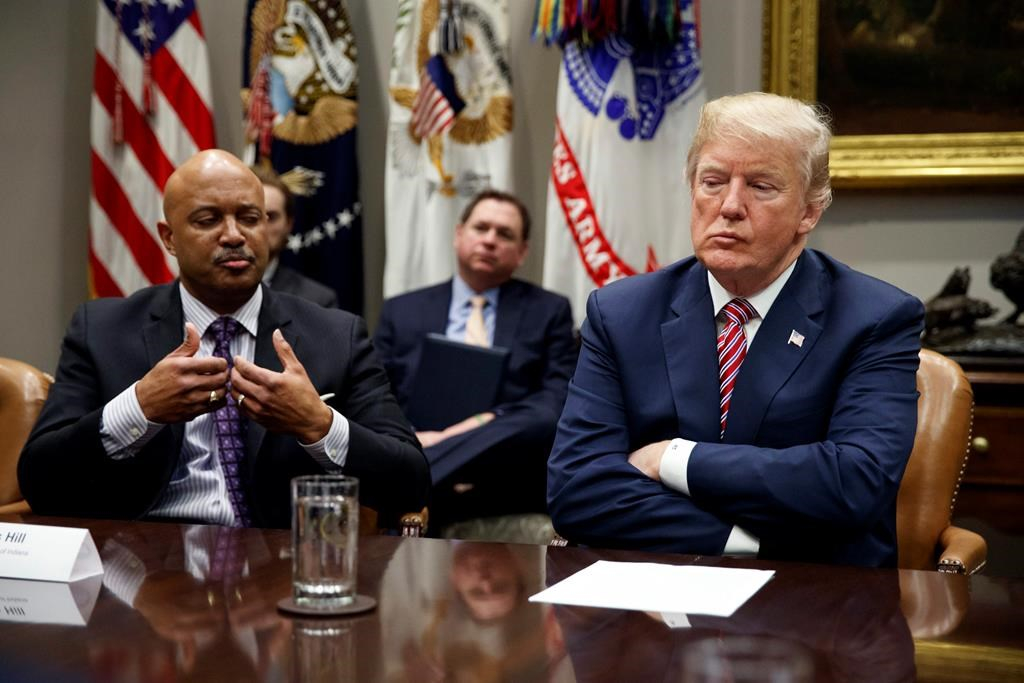 President Donald Trump listens as Indiana Attorney General Curtis Hill speaks during a meeting with state and local officials to discuss school safety in the Roosevelt Room of the White House on Feb. 22, 2018, in Washington. Photo by The Associated Press
Previous story

President Donald Trump is floating a unique two-step move on gun control. It involves both more guns and more controls.

The additional guns would be inside schools.

The president made clear Thursday that he believes additional security in schools is a key to halting America's mass-shooting scourge. In his view, the solution includes pay bonuses for teachers willing to pack weapons.

"We have to harden our schools, not soften them. A gun-free zone to a killer or somebody who wants to be a killer, that's like going in for the ice cream. That's like, 'Here I am, take me.' We have to get smart on gun-free zones," the president said.

"They're not going to walk into a school if 20 per cent of the teachers have guns. It may be 10 per cent, it may be 40 per cent. Now what I'd recommend doing is the people that do carry ... we give them a bonus."

That's consistent with the view of the National Rifle Association — the gun lobby has a program that funds schools willing to add security, including more firearms.

The idea faces potentially insurmountable resistance. Members of Trump's own party have said they're not interested in taking this up legislatively — Sen. Marco Rubio brushed it off during a heated town-hall debate on CNN.

Some teachers have expressed mortification over the idea and questioned how it might work in practice. The questions included training, and liability issues in the event a student were killed by friendly crossfire.

When Trump first raised the idea this week at a meeting with shooting survivors, one parent criticized it and drew applause from others in the room.

But that's only half of his proposed solution.

The other half involves more controls — with four new proposals: additional background checks, mental-health screening, a ban on so-called bump stocks and raising the age limit on certain purchases to 21 from 18.

These ideas face challenges from the right.

The NRA, for example, is dead-set against raising the age limit. In a statement, it questioned why a single mother aged 20 should be deprived of the same constitutional right to bear arms as everyone else.

The conservative Breitbart website also ran a story expressing concern about the background checks, saying they would lead to a national gun registry.

Trump sounded confident of his ability to get the NRA onside.

A number of Republicans are interested in the other proposals — background checks, mental-health screening, and banning bump stocks. Rubio expressed support for all three on live TV as survivors of the Florida school shooting grilled him.

Polls suggest widespread support for such limited measures — over 80 per cent, and in some cases over 95 per cent, far higher than the roughly two-thirds of Americans who favour a broader gun ban.

But those more modest measures have been thwarted in the past by opposition on the right.

That opposition was evident just outside Washington on Thursday. Supporters of the president's party gathered for the annual Conservative Political Action Conference. Two speakers from the NRA railed against gun control and against the news media for allegedly creating a phoney debate in the wake of last week's massacre.

Spokeswoman Dana Loesch pointed to the journalists in back of the room.

"Many in the legacy media love mass-shootings. You guys love it," she said.

"I'm not saying you love the tragedy. But I am saying that you love the ratings. Crying white mothers are ratings gold... Where's the CNN town hall for (black mothers in) Chicago?"

The organization's Wayne LaPierre also emphasized the organization's project called National School Shield. Created in the wake of the Sandy Hook massacre, the program provides advice and funding for schools to beef up security measures.

"It should not be easier for a madman to shoot up a school than a bank, or a jewelry store, or some Hollywood gala... Evil must be confronted immediately with all necessary force to protect our kids."

A top Democrat tweeted about his fear that, under heat from the gun lobby, the president will melt. Senate minority leader Chuck Schumer noted that the president had supported gun measures in the past and dropped them.

"(He's) pushing for action on things ... the NRA opposes," Schumer wrote. "Last time he showed support for sensible gun reform ... he quickly dropped his support once the NRA opposed it.

"I hope this time will be different."