By Tzeporah Berman | Opinion, Energy, Politics | February 23rd 2018
#22 of 55 articles from the Special Report: Letters to the Editor 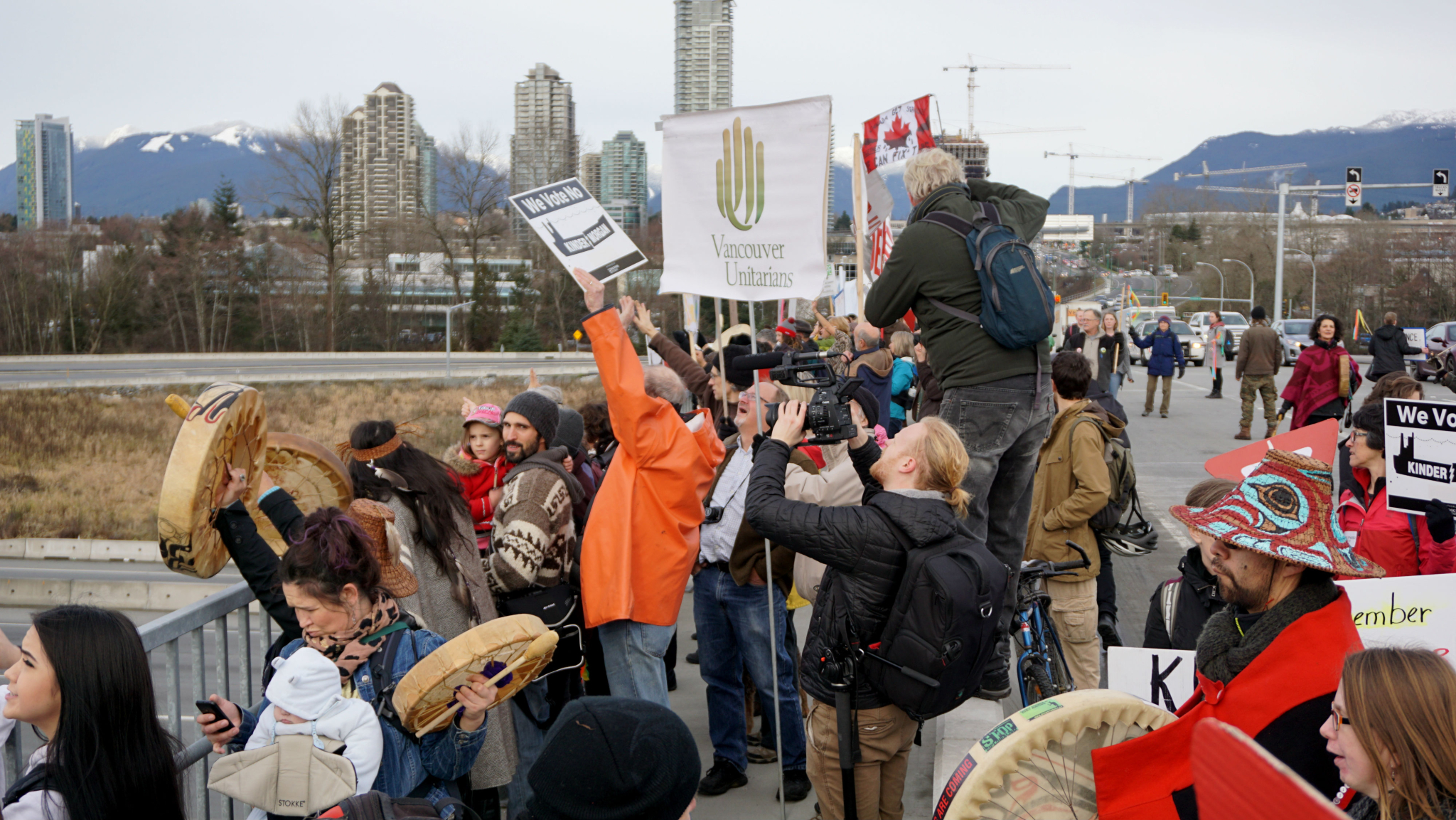 Protesters take over a bridge in Burnaby, B.C. during a National Energy Board hearings for the Kinder Morgan Trans Mountain expansion project in January 2016. Photo by Elizabeth McSheffrey
Previous story
Next story

The "national interest” is an interesting term.

Under the Harper government, this term was distorted to reflect a blinkered obsession with expanding the oil and gas industry despite the growing impacts of climate change, and the promise of new cleaner technologies and energy sources.

Many of us expected more from the Trudeau government. History shows us that national interest seems to mean whatever the person using it wants it to mean. Also interesting, is that it often gets invoked to overcome opposition of some kind.

Who gets to decide? Is it the prime minister of the day, regardless of merit? Many would say building the railroad was in the national interest.

But was interning Japanese Canadians during the Second World War? Was government funding for residential schools in the national interest?

Today we hear that building Kinder Morgan's Trans Mountain oil expansion pipeline is in the national interest. After all, Prime Minister Justin Trudeau says so. This is despite his broken promise to give the project a new environmental assessment process.

This is also despite his failure to answer questions raised by his own ministerial panel on the project. It is also despite the strong opposition of many First Nations across B.C. (along with an alliance of 150 Nations from Canada and the U.S.), and B.C. local governments.

Vancouver has been told it must accept a seven-fold increase in oil tankers through its waters. Young Canadians have been told to accept the associated increase in greenhouse gas emissions even as we are in a climate crisis that requires deep and immediate reductions.

Does Justin Trudeau get to decide that broken promises, flawed processes, violating Indigenous rights, and causing environmental damage is in the national interest, all as long as the oil flows?

That the B.C. government is now stepping in to study the effect of diluted bitumen on the marine environment is in fact due to Ottawa's failure to do its job. This was one of the key issues glossed over during an environmental assessment process that Trudeau once himself said was flawed, until suddenly it wasn’t.

British Columbia is doing what Canada should have. That we find ourselves in this awkward situation now, is a failure of successive federal and provincial governments to craft a meaningful energy and climate strategy for the country. Under NAFTA's energy chapter, we explicitly gave away our ability to make policies that would treat our oil and gas differently in the national interest – something the industry wanted, and something that current pro-oil politicians somehow always seem to forget when they wrap themselves in the flag.

As the seriousness of the climate crisis became known, Canadian politicians have been like deer in headlights, refusing to admit that climate math shows that we will not be able to dig up and burn the majority of our fossil fuels. The math also says we should not be building any new fossil fuel infrastructure like pipelines if we want to keep global warming below two degrees.

Indeed, we should be rapidly replacing it with clean energy infrastructure. Yes, all this is hard.

It means that Canada’s fossil fuel industry can’t keep growing unchecked. It means a managed transition to a clean energy economy with retraining for many workers and buyout packages for others. It means capturing more of the oil wealth currently flowing to offshore investors, and putting it instead into a clean energy future here at home.

In short, if anyone tells you that the national interest equates with Kinder Morgan (a Texan company born in the aftermath of Enron), then they have an incredibly blinkered perspective on where we are as a country at this point in history.

There are moments in history when our politicians fail us; when vested interests like the big oil incumbents have undue influence on our political process. There are moments in history when we are called to stand up, and demand that our politicians take into account the big picture, including the risks of unsafe projects like the Kinder Morgan pipeline, which scientists tell us threatens the very existence of the few remaining southern resident orca whales, and puts the safety of local residents at risk.

We must demand in this so-called era of reconciliation, that our politicians respect that local First Nations tell us that this pipeline threatens their treaty rights, water and food sources.

Standing up to oppose the Kinder Morgan expansion does not threaten existing oil workers' jobs. It is an acknowledgement that this industry is big enough and that the moment we live in requires us to instead invest in new clean technologies and prioritize growth in other industries that will ensure resiliency in the face of a changing climate.

Change is never easy and this transition away from the dirty industries of the past will be difficult, but make no mistake, our national interest is served by making decisions based on science and respect for Indigenous rights — not through crass political compromises and back room deals. Our prime minister has argued that this pipeline is part of a 'deal' to ensure a climate plan.

That's not good enough. Governing requires hard choices and leadership. History is made by those who have the courage to show up. Over 20,000 people have signed up to stand with First Nations to oppose this project, to redefine national interest, to do what Ottawa should have done months ago. I will stand with them.

— Tzeporah Berman, BA MES LLD (honoris causa) is an adjunct professor of environmental studies at York University and a board member of Stand.Earth.

The "National Interest" has

The "National Interest" has always been the need for greed. "… dirty industries of the past ..." will remain as dirty as they are enabled to be.

Moving away from an economy based on fossil fuels has only short term pain. Destroying the environment under the guise of the "National Interest", is forever, and with an irreversible cost.

Is the legalization of pot in the "National Interest"? Supposedly, "They'll stone you when you're tryin' to make a buck....everybody must get stoned". They are already.

All the better to push a

All the better to push a dirty pipeline through your back yard. LOL.....lighten up, would'ya?
If you're high enough, everything is possible.

Our politicians are captive

Our politicians are captive to the fossil fuel industry and this has to change very quickly.
Horgan is in the hot seat! He has to stop this pipeline dead in its tracks by what ever means.

It is in the national

It is in the national interest to save the over 30% of Canada's arable land which is in Alberta from the ravages of fracking. Not only the Government of Canada but the Government of Alberta needs to grab some courage and stop bowing to corporate interests, selling our oil and gas at bargain basement prices and selling out our environment.

Congratulations, Tzeporah, you have summed up the case against Kinder Morgan, in fact, against all new pipelines, very succinctly. The vast majority of people seem to agree that the tar sands should be left alone until they can be processed in situ and in a environmentally friendly way.

A project which pits the

This is a statement of

This is a statement of principles without an answer. So what's your solution? There seems to be only 2 choices: Proceed with the project (to make Albertans happy) or kill it (to make British Columbians happy)? If you have a third solution, let's hear it.