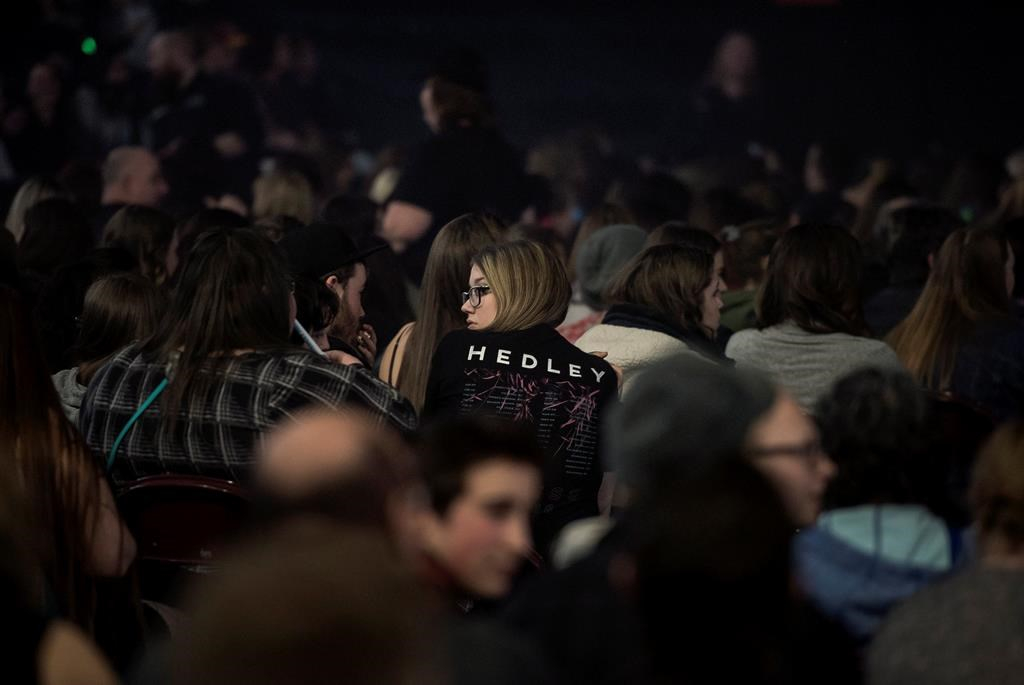 A fan wearing a t-shirt for the rock group Hedley sits in the crowd before the band's concert in Halifax on Friday, February 23, 2018. Photo by The Canadian Press/Darren Calabrese
Previous story
Next story

The band has been dropped by their management team, tour openers and dozens of radio stations, but concert-goers say they are standing by Hedley as the besieged pop-rockers continue to perform across the country in the wake of sexual misconduct allegations that they have steadfastly denied.

Fans screamed until they were out of breath during Hedley's lively performance at Halifax's Scotiabank Centre on Friday.

Frontman Jacob Hoggard thanked Hedley fans from the "bottom of our hearts" for being the people the band could always rely on, but did not directly address the anonymous allegations of inappropriate behaviour involving young fans that have emerged on social media in recent weeks.

"To everybody ... who has stood behind us all of these years — through the ups and the downs, through the highs and the lows, the good times and the bad — Halifax, we could never, ever imagine doing this without you," Hoggard told the crowd over anthemic music.

The Canadian Press, which normally does not pay to cover live events, purchased a ticket to Friday's show after representatives for Hedley only offered press credentials for the first three songs of the band's performance.

Band representatives said Hedley is not giving interviews at this time. Hedley has called the allegations "unsubstantiated" in a statement earlier this month.

As fans filed into the Halifax auditorium on Friday, many concert-goers said they were more focused on enjoying the show than litigating the allegations against Hedley, which some said had little bearing on their feelings towards the band.

Several fans said they had not investigated the claims themselves, or did not believe it was their place to cast judgement.

"The band is probably suffering, but until there's more about it, everything's pretty vague," said Kristen MacIntosh, who drove from Cape Breton to see the show with her eight-year-old son after buying him a ticket as a Christmas present.

Some fans expressed skepticism about the legitimacy of the claims, questioning why anonymous social media users would bring up years-old allegations online rather than going to authorities.

Madisson Muise, a 16-year-old who came to Halifax from Yarmouth, N.S., to attend her first concert, said she was relieved she could still see her favourite band perform after fearing the tour would be cancelled.

"Their fans are really supporting them and sticking together," said Muise.

Seats filled up in the auditorium as Toronto-based pop band Liteyears kicked off the show, filling in as Hedley's opening act after singer Shawn Hook and Halifax's Neon Dreams ditched the tour.

Liteyears frontman Brent Wirth told the crowd the past week has been a whirlwind, saying the band had been holding on to their musical dreams by a "pinkie" until their fortunes turned around in a matter of 24 hours.

Cellphone lights and flashing neon sticks swarmed like fireflies as the crowd welcomed Hoggard and Hedley bandmates Dave Rosin, Tommy Mac and Jay Benison to the stage with rapturous cheers.

Concert-goers danced in the aisles and sang along as the band played songs off their latest album and previous hits.

Nineteen-year-old Kendra Cann said she had won a radio contest to sing on stage with the band, but the plan was cancelled after the allegations surfaced.

Instead, Cann was pulled up to the front row where Hoggard picked her out of the crowd and called her out for texting during the concert, then jokingly confiscated her phone to call her family and friends from the stage.

During one phone call, Hoggard told Cann's star-struck friends that they "better be old enough to be having a fun time, you little rascals."

After the show, Cann said she "went blank" during the encounter.

"I was like, 'He's right there. He said Kendra. He said my name,'" Cann said with a giggle. "It was the experience of a lifetime."

The Halifax performance was met with mixed reactions on social media.

Some diehard Hedley fans cheered on the band from afar, while other Twitter users expressed discomfort with the cloud of controversy following the musicians as they continue their tour in Ontario this week.

Alison Weatherston in Ottawa tweeted that her 15-year-old daughter, who has seen Hedley perform multiple times, was "heartbroken" after learning of the allegations against the band.

"She put her concert tees into the bag of clothes for the Salvation Army," Weatherston wrote. "It's hard to see your idols being awful."