By Clothilde Goujard | News, Politics | February 26th 2018
#3 of 5 articles from the Special Report: Europe on Alert 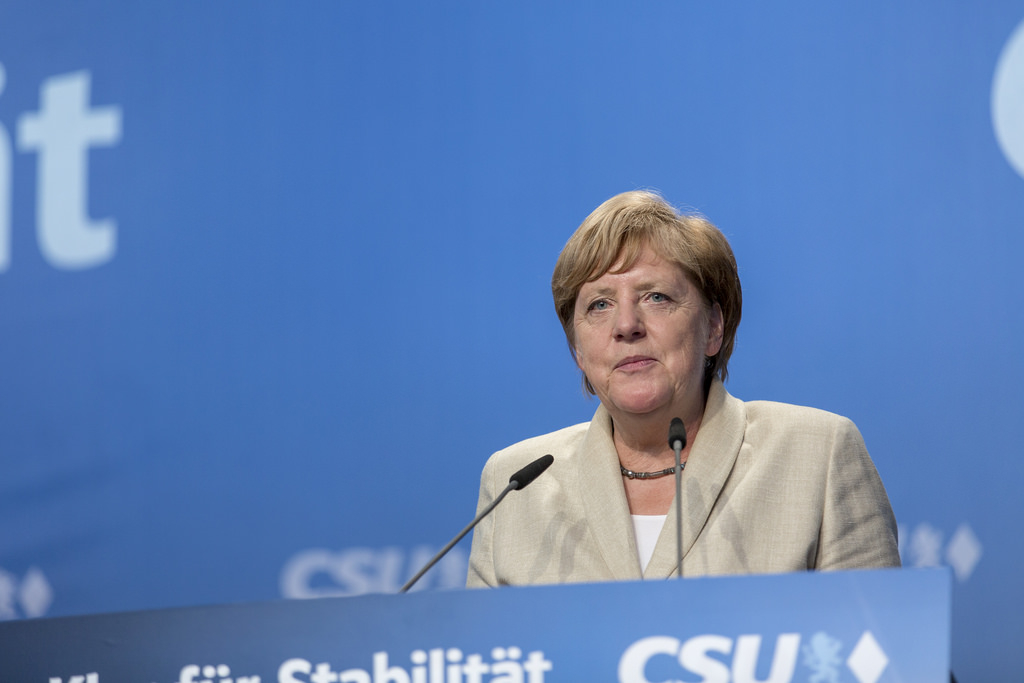 The city of Cologne coordinates its efforts for the arrival of refugees in an unremarkable third floor office inside an early 20th century administrative building.

Just a few doors down the hall is the local office of Alternative for Germany (AfD), the first far-right party to win seats in the German federal parliament in 60 years.

While the two offices are almost side-by-side, the work they're doing couldn't be further apart. The city officials work to integrate some 200,000 newcomers into Germany's fourth-largest city, while the AfD campaigns against them, stoking fear of Muslims and immigrants.

The AfD emerged in 2013 at the height of a debt crisis in eurozone countries and has since gained traction at all levels of government in Germany. The party's historic breakthrough came in September 2017, when the AfD won 13.5 per cent of the vote and 94 seats in the federal election.

Cologne is the largest city in the state of North Rhine-Westphalia, where 15 AfD members of Parliament were elected. That is slightly above the national average of 13 per state. Since the first waves of refugees arrived in Germany in 2015, Cologne has been at the heart of the discussion about the rise of far-right politics and its impact on refugees as well as on Germans of Muslim faith.

North Rhine-Westphalia is home to 1.4 million of the four million Muslims in Germany. Cologne is also one of the biggest German-Turkish communities in the country.

Lamya Kaddor is a leading German scholar who studies Islamophobia at the University of Duisburg-Essen, about an hour away from Cologne. Outside of her studies, she helps people organize and stand up to far-right rhetoric. She also does work to prevent the Islamic radicalization of youth.

Kaddor, 50, grew up in North Rhine-Westphalia in the city of Ahlen, and she describes herself as a "liberal Muslim woman." While she believes that there's nothing new about Islamophobia, she says it's a phenomenon that's getting worse everywhere.

“It’s not just against Muslim refugees but against all Muslims,” she said in an interview with National Observer in December. “It’s a worldwide phenomenon that is getting stronger.”

The rise of the AfD is souring the atmosphere, she said.

“If you are watching a talk show on TV on the topic of Islam, every time there will be a man or woman for example from the AfD…who will say that Islam is a problem and that Muslim people don't like democracy, are subversive and doing this or that and that the headscarf is a problem,” she said.

Kaddor is active within her community. She has been leading a research project on Islamophobia among youth since May. Kaddor was also the co-organizer of a march called “Not with us” (#NichtMitUns) for “Muslims and friends to unite against violence and terrorism” in June 2017 during Ramadan.

“There was a necessity, it was an emotional thing as a liberal Muslim to say ‘stop, it's enough,’ to do something symbolical,” she said.

She said that terror attacks have also sparked an increase in discrimination against Muslims. This is something that has prompted her to publicly condemn all forms of violence.

Riem Spielhaus is an Islamic scholar at the University of Göttigen who focuses on Muslim minorities and identity politics, among other topics. She agrees that the conversations she hears about immigration and Muslims are becoming “alarming.”

She said that in the federal election campaign, there were many questions during candidate debates — between German Chancellor Angela Merkel and her opponent, then-Social Democratic Party Leader Martin Schulz — that were related to the AfD’s platform about immigration and their concerns.

“It's always in the news, it's always approached as the "besorgte Bürger," as if the only thing "the worried citizen" is worried about is Islam, or Muslims, or refugees or immigrants,” she said in a phone interview with National Observer in February.

Spielhaus thinks that there is also a misconception that all Muslims are immigrants and that all immigrants are Muslims.

“It's a very tortured debate that we're having, that is not open for a diverse set of opinions but that is always opinionated into a very specific AfD direction and a lot of people are now worried that this will become stronger and stronger,” she said.

Merkel has been outspoken about the rise of Islamophobia on the international stage, accusing populists of distorting democracy.

Last year, she criticized U.S. President Donald Trump's attempts to impose a travel ban on citizens from Muslim-majority countries, while also making a point of stressing that Islam was not a source of terrorism, Al Jazeera reported in February 2017.

“As we go on with our lives and work, we tell the terrorists: You are murderers full of hate, but you will not determine how we live and want to live. We are free, compassionate and open,” she said.

Spielhaus is also worried that some alarming phrases, considered inappropriate for decades, are starting to return to the mainstream.

“With the AfD you see the bounds of discourse that have been really stretched into a direction that was not possible before because of the Nazi history in Germany,” she said. “That’s really changed in the last years and it became stronger in the last six months.”

Since 2010, Spielhaus and her colleagues have been studying what they call Germany’s “post-migration society." Germany has received an influx of temporary workers and their families who had come in the 1950s and 1960s, mostly from Turkey. Many have now settled and become citizens, creating nationwide debates about integration.

But fear and tensions have escalated after the terrorist attacks of 9/11, sparking “obsessions” around immigrants and their children from countries with Muslims majorities. Former immigrants, including Germans of Turkish descent, have also been caught in that debate which Spielhaus said has resulted in a growing fear of Muslims in Germany.

“Fear comes in very strongly because people have the actual feeling — a lot of the media and political debate is talking about that — that there might be a real threat (from Muslims),” she said.

She said that the security fear about terror by Islamic terrorists was often at the centre of political debates while there was not enough of a focus on extreme-right violence in the country.

Cologne is no stranger to such violence.

In October 2015, Henriette Reker was stabbed by an attacker with extreme-right views on the day before she was elected mayor of Cologne. At the time, Reker was a city councillor in charge of housing for asylum seekers. The accused assailant told a trial that he wanted to send a message against her support for refugees.

Tensions continued to rise in the city with the more visible presence of the AfD and its supporters. In April 2017, the anti-immigration party organized a two-day national convention in Cologne with 600 delegates. The event also brought about 4,000 police in riot gear on stand-by, in case of clashes among protesters.

In an annual report, Germany’s domestic intelligence agency said there had been a 42 per cent increase in violence by far-right extremists in 2015. The violence included 75 arson attacks against refugee housing centres.

"Current investigations against the suspected development of terrorist groups point to the possible emergence of right-wing terrorist structures in Germany and the need for the government to take rigorous action," the interior ministry said in a statement that was published with the report, according to an English translation by German broadcaster Deutsche Welle.

The report indicated that acts of violence by far-left groups had also increased sharply, often targeting far-right activists and police. It also noted a rising threat by about 10,000 Salafists, followers of fundamentalist Sunni Islam, who are now estimated to live in Germany. It's a trend that has security officials concerned that some may use this movement as a stepping stone to Islamist terrorism, Deutsche Welle reported last fall.

Hans Oster, coordinator for refugee integration, and Martin Dommer, communications officer for the City of Cologne, say they have been surprised by how people are starting to get uncomfortable about the growth in refugee housing units.

With the unexpected influx of refugees, the city of Cologne's existing housing infrastructure for refugees was inadequate. Oster and his team had to find vacant lots to build new apartment blocks for incoming refugees.

“With all the politics at the moment, people are saying ‘no we don’t want a refugee home, we have other problems in the neighborhood to take care of,’” said Oster in an interview with National Observer in December.

They are surprised about this reaction because Cologne is so diverse, with a third of its population born abroad, Oster said.

Dommer thinks images in the media of thousands of refugees arriving in Germany by train and by foot created anxiety even for professionals like them who wondered how they would accommodate them.

While he said there has been numerous citizen initiatives to help, the influx of refugees has also contributed to the rise of some parties with anti-immigration platforms.

On New Year's Eve, 2015, Cologne came under scrutiny when hundreds of women reported being sexually assaulted and harassed by groups of men around the central train station. Misinformation spread that crowds of thousands of refugees had mobbed German women. Later, police investigations found that 600 women were assaulted on that night and 120 suspects had been identified. About half of them were identified as new immigrants and asylum seekers.

“In a certain way, it was fatal because right wing parties profited from that event and played that event to create fears especially with people who are not faced with refugees in their everyday lives,” Dommer said.

His colleague, Oster, said that Germany needs to have a frank discussion about its immigration and integration policies.

“The more integration is successful, the less right wing parties will succeed,” he said.