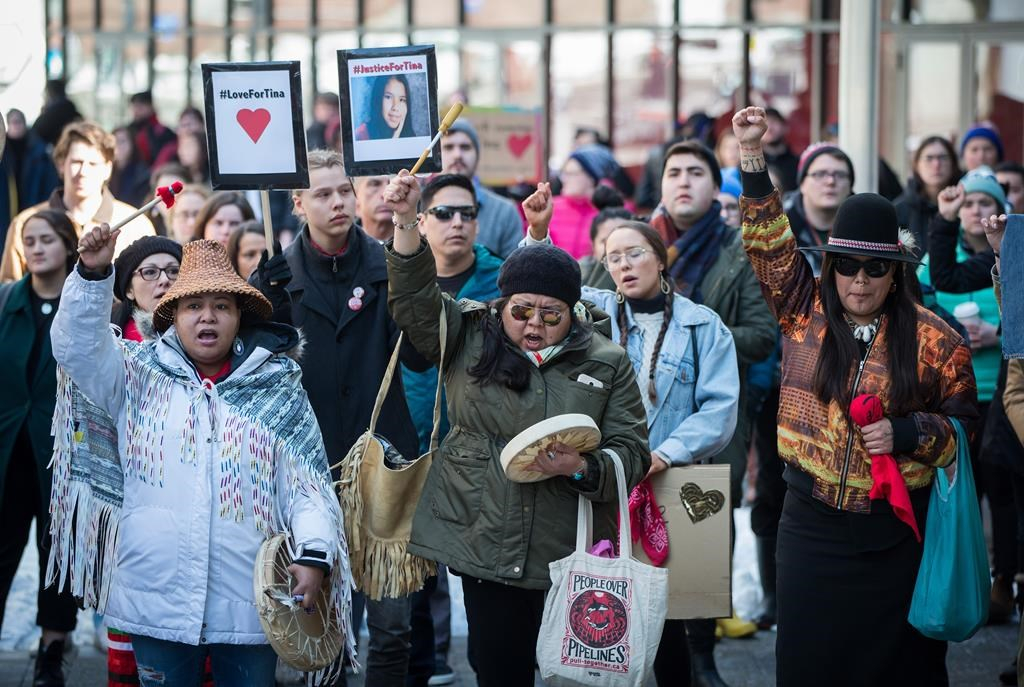 Rally for Tina Fontaine in Vancouver, B.C. on February 24, 2018. Photo by the Canadian Press
Previous story
Next story

The Aboriginal Women's Action Network is reeling from the utter lack of justice for Tina Fontaine. Despite our hard work to continually "break the silence" on male violence against Indigenous women and girls, Canada and its systems and institutions bulldozes "forward" with its neocolonial doctrine. We cite the horrid statistics, we march in the streets, we push for a National Inquiry and we provide testimonials. And that neocolonialism, rife with patriarchal values and practices, puts yet another Indigenous girl into the "disposable" pile.

We call on Carolyn Bennett to offer greater support to the National Inquiry on Murdered and Missing Indigenous Women and Girls. It's not enough to pass this issue off to the Commissioners. Our great leader, the late George Manuel said that we, First Nations, were like the seagulls flying behind the BC ferries, fighting for the scraps. The neglect and under-resourcing of this Commission reminds us of our own community struggles when the needs are so great and there's never enough to go around.

The concrete realities we, Indigenous women and girls face are known. We all knew about how broken the systems and institutions were long before the tragedy of Tina Fontaine.

In the face of this National Inquiry, police forces across this country continue to neglect our safety by refusing to arrest men who beat us, rape us or buy us for sex.

Indigenous mothers know that the state continues the theft of our children and the safety of our daughters is further compromised when they're in state care.

Mary Ellen Turpel Lafonde’s 2016 report "Too Many Victims: Sexualized Violence in the Lives of Children and Youth in Care" states that 57 per cent of these cases were against Indigenous girls despite the fact that Indigenous girls comprise 25 per cent of children in care. This unequivocally establishes that our girls are targeted with impunity.

We do not need to wait for the National Inquiry on the Murdered and Missing Indigenous Women and Girls to complete its Final Report to respond to these broken systems.

We share in the sadness of Thelma Favel, Tina's grand aunt and care-giver, as well as all our relations among Indigenous Peoples. We feel the rage Valentina Duck, Tina's mother, expressed following the verdict. And we feel the frustration that came through advocate Sue Caribou's tears because we are left with the burden of no end in sight of the injustices against us. But we will never give up on our struggle and our demand from the Canadian state to end male violence against Indigenous women and girls, to end violence against all women and girls.

As a 'Canadian', white, privileged female I am deeply ashamed of the settler legacy and ongoing crime of misogynist/racist genocide of indigenous women, girls, men and boys which continues unabated today. I will do everything in my power to speak out and take action. You are not alone, I and others stand with you. Together we will overcome.