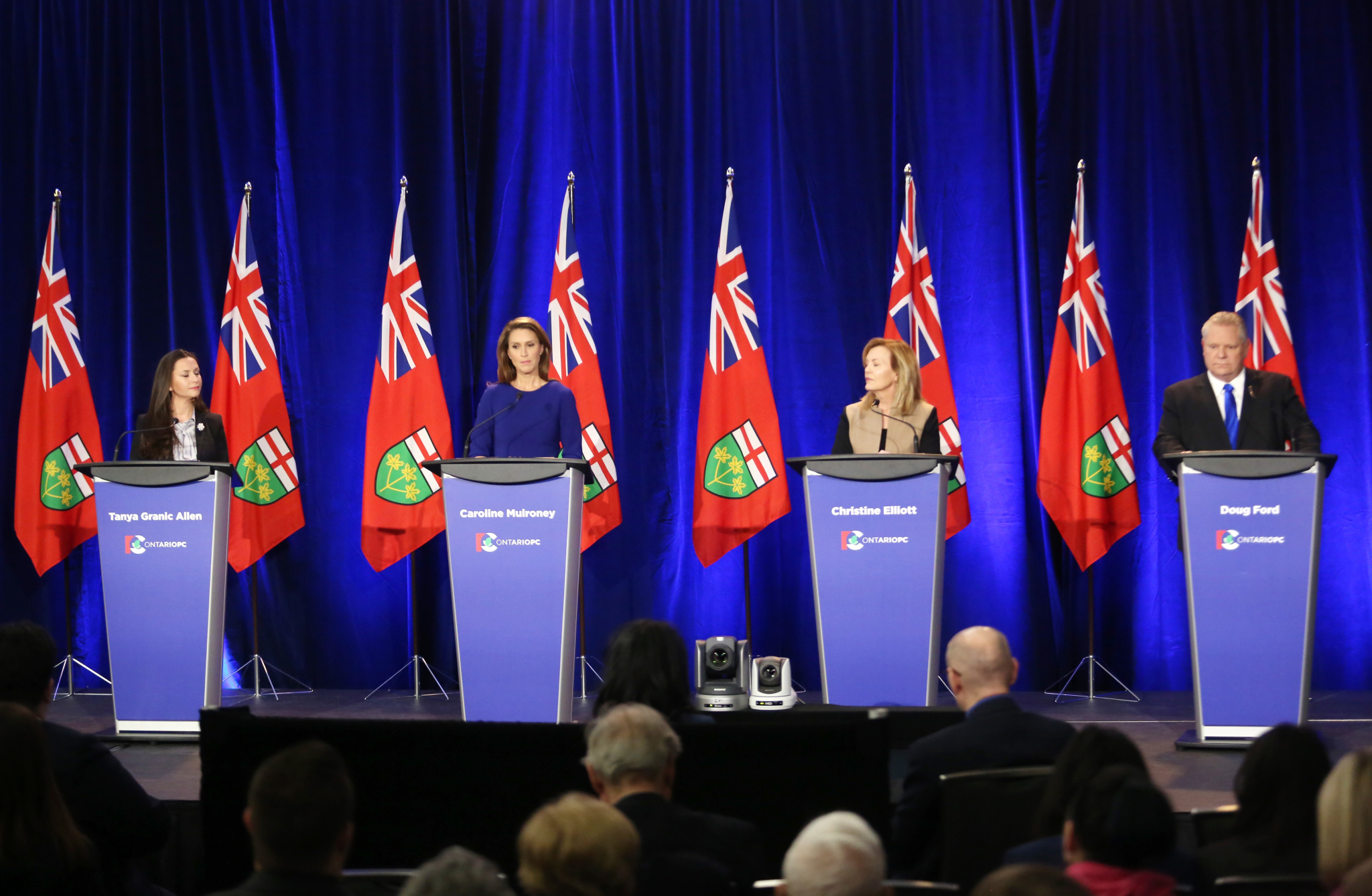 The political ghost of Patrick Brown was resurrected Wednesday night at an Ontario Progressive Conservative leadership debate in Ottawa that saw one candidate skating close to climate change denial, while another said there are "two sides" to the #metoo debate.

After the former PC leader’s spectacular 10-day flameout leadership candidacy, which he launched weeks after abruptly resigning from his post on Jan. 25 amid sexual misconduct allegations he denies, the four remaining contenders were all forced to react to the scandal Brown had brought upon the party.

“Saying you've cleared your name and clearing your name are two different things,” said Caroline Mulroney at the debate, which took place at the Shaw Centre in Ottawa. Mulroney had called on Brown to quit the leadership race on Feb. 22, four days before he did so.

Mulroney and her fellow contenders Doug Ford, Christine Elliott and Tanya Granic Allen answered an opening salvo of questions about how to deal with the continued Brown fallout.

“As for Patrick, I have said this from the beginning of the campaign: he deserves the right to clear his name,” said Elliott, answering a question by moderator Althia Raj, HuffPost Canada's Ottawa bureau chief.

Ford was more ambivalent. “As for Patrick Brown, he has to take care of a few things. Once I’m premier — or leader — we’ll sit down,” he said. Then he quickly followed with: “I don’t know why we keep talking about Patrick Brown.”

Granic Allen was the most vitriolic, saying she was “disappointed” Brown wasn’t at the debate — she had a few things to say to him. “Patrick Brown does not run for me,” she said to applause, lamenting the “corrupt manner in which he’s run his party.”

“I’m going to take those wind turbines and I’m going to rip them right out of the ground...we have the constitutional ability to do so,” Granic Allen said. But it wasn't the most colourful comment on climate by Conservatives. #cdnpoli

Mulroney, who said Feb. 8 she was against "Justin Trudeau's carbon tax,” doubled down on her stance. She said she would work “proactively with businesses” to tackle greenhouse gases and “developing technology with environmental innovators,” as well as conservation efforts.

“We don’t have to tax people any more in order to deal with [climate change],” said Elliott. She would also say to Trudeau, “you don’t tell us what to do,” and instead offer incentives to business to reduce greenhouse gases.

Ford took credit for being the most anti-climate. He called the Green Energy Act a “scam” and said the federal carbon pollution pricing regime is an “absolute job-killer.”

He repeated his catchphrase — that he has a “cap and trade” plan, “we're going to put a cap on taxes and trade Kathleen Wynne” — shouting it over Raj as she tried to move on to another question. And he repeated his pledge to work with a Jason Kenney-led Alberta.

“I do believe climate change exists,” said Granic Allen, but mankind’s contribution is “still being measured.” She said she would repeal what she called the “Tesla” tax rebate, Ontario’s subsidies for zero-emission vehicles.

And she repeatedly railed against Ontario’s wind energy system.

“I’m going to take those wind turbines and I’m going to rip them right out of the ground...we have the constitutional ability to do so,” she said.

When the debate veered into the issue of sexual misconduct, Ford hesitated before calling it "unacceptable.” Then he added: “It’s not just women, it's men too. It’s on both sides.”

“No one should use their power to pressure anyone into anything," he said. “There’s rules of conduct right now. They have to follow them...there’s rules. There’s laws in place. That’s what it comes down to...it’s very simple."

Ford also seemed caught off guard when Raj asked him about Australia’s move to ban ministers from having sex with staff. First he seemed not to hear the question, and then when he understood what she was asking, he declared, “it’s a no-brainer!”

Elliott said any sexual harassment in the workplace, or anywhere else, shouldn't be tolerated, while Mulroney noted how the movement is "transforming business culture across this province, and political culture."

The Tory leadership contains a drug dealer, a whacko, and a political elite...makes sense to me.

What Canada doesn't need are

These folks may be comfortable living under their rocks; but ordinary Canadians need real leadership.

Without the forward thinking

Without the forward thinking Green Energy Act (GEA), Ontario would still be burning coal, still be regarding electricity generated from natural gas as "green", still be looking at fossil fuels as viable energy sources, and still be "thinking" about acting on climate change.

Yes, the GEA is expensive, but it provided the impetus for people and industry to change their mindset, based on truthful, reliable, SCIENCE. Thousands jumped on board for the "right" reasons, putting up multi-millions in corporate and individual/private funds (and substantial risk) to install the Green Energy infrastructure (solar and wind electricity generators) that would have been prohibitively expensive for any government to fund.

Ontario gets the energy, yes, for a premium contracted price, but it has NO capital outlay for these systems, pays no interest charges, no maintenance costs, has no risk, and buys CLEAN energy.

Now that's a no-brainer! The Green Energy Act needs to be here to stay.

Seems like a shame that in a Province the size of Ontario, that this lot is the best that the conservatives can muster.